109 Yemenis traded for 9 Saudis amid war 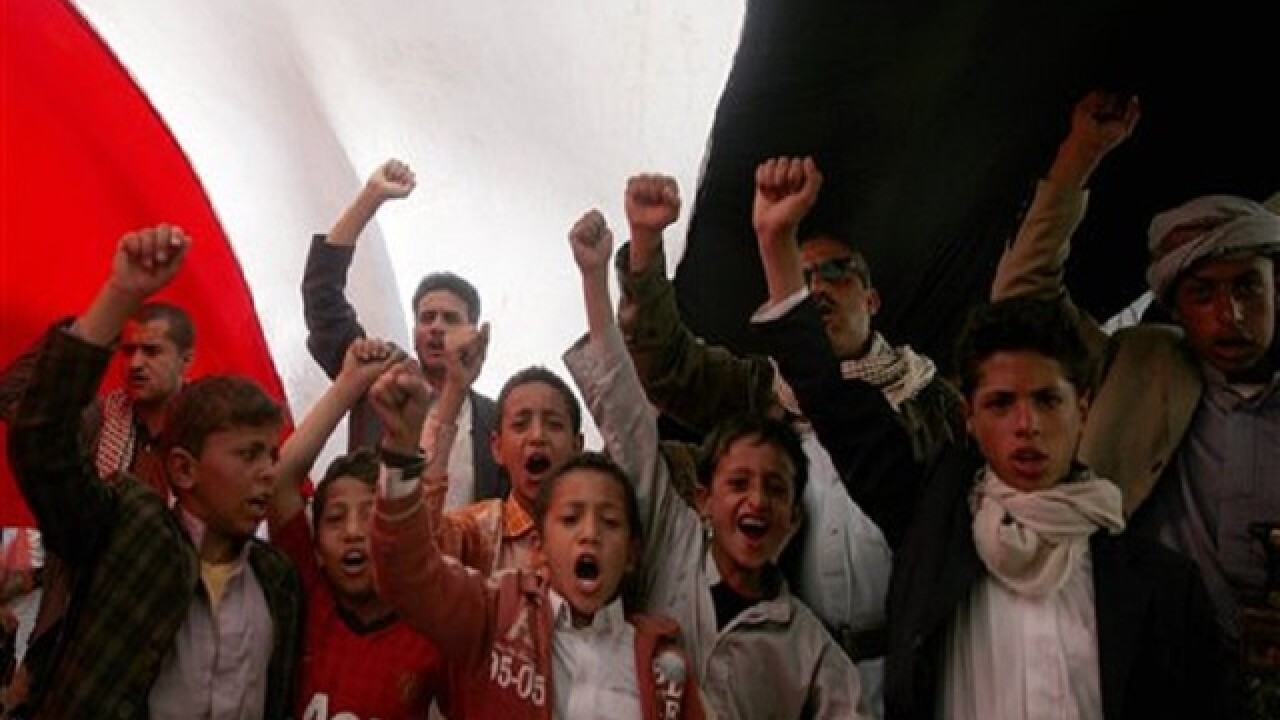 Hani Mohammed
<p>Boys and men chant slogans during a protest against Saudi-led airstrikes, in Sanaa, Yemen, Friday, March 18, 2016. Saudi Arabia said Thursday its military coalition will scale down operations in Yemen, an announcement that came as the death toll from an airstrike by the alliance on a market north of the Yemeni capital on Tuesday reached at least 115. A U.N. official said over 20 children were among those killed in the Hajja province, an area controlled by Yemen's Shiite rebels known as Houthis. (AP Photo/Hani Mohammed)</p>

SANAA, Yemen (AP) — A military coalition led by Saudi Arabia that is fighting a war with Yemen's Shiite rebels said Monday that it has traded 109 Yemeni prisoners taken during the fighting in the neighboring country for nine Saudis who were held captive.

It was the latest prisoner exchange ahead of a scheduled April cease-fire and peace talks, coming just after tribal authorities and Yemeni officials said suspected U.S. drone strikes killed least 10 suspected al-Qaida militants in the country.

A coalition statement carried by the state-run Saudi Press Agency said the trade happened on Sunday, but it did not explain how the Saudis ended up in custody in Yemen. It said the Yemenis held had been detained in "areas of operations near the border of Saudi Arabia."

The exchange comes as the Saudi-led coalition and Yemeni rebels, known as Houthis, have agreed to a cease-fire at midnight on April 10 ahead of peace talks starting April 18 in Kuwait. Earlier this month, another exchange saw Saudi Arabia release seven Yemenis for one of its soldiers.

In its statement, the coalition said it hoped the tentative calm now in Yemen would allow "aid to reach all Yemeni territories" and would support United Nations' efforts to end the fighting.

In the chaos of Yemen's war, a powerful al-Qaida affiliate has seized a large swath of territory across the country's south and east, while an upstart Islamic State branch has carried out a series of attacks.

Tribesmen and security officials said that suspected U.S. drone strikes late Saturday night into Sunday morning targeted an Al-Qaida in the Arabian Peninsula camp in the Mahfad area of Yemen's southern Abyan province. They said that at least 10 suspected al-Qaida militants were killed and others were wounded in the strikes targeting "Wadi al-Dayqa," which means "the Narrow Valley" in Arabic.

The officials spoke on condition of anonymity as they weren't authorized to publicly discuss details of the strike.

The al-Qaida affiliate said on Twitter later Sunday that U.S. drones struck its fighters as they prepared to attack Houthis in Bayda to free their compatriots.

The U.S., while pulling out advisers from Yemen as the civil war there ramped up, has continued its drone strike program targeting its local al-Qaida affiliate, which Washington believes to be the most-dangerous branch of the terror organization.

Yemen's conflict pits the government, backed by the Saudi-led coalition, against the Houthis, allied with a former president. The Houthis took over the Yemeni capital, Sanaa, in September 2014, and the U.S.-backed coalition began airstrikes against them in March 2015.

More than 6,000 people have been killed in fighting, millions are displaced and the Arab world's poorest country has been pushed to the brink of famine.