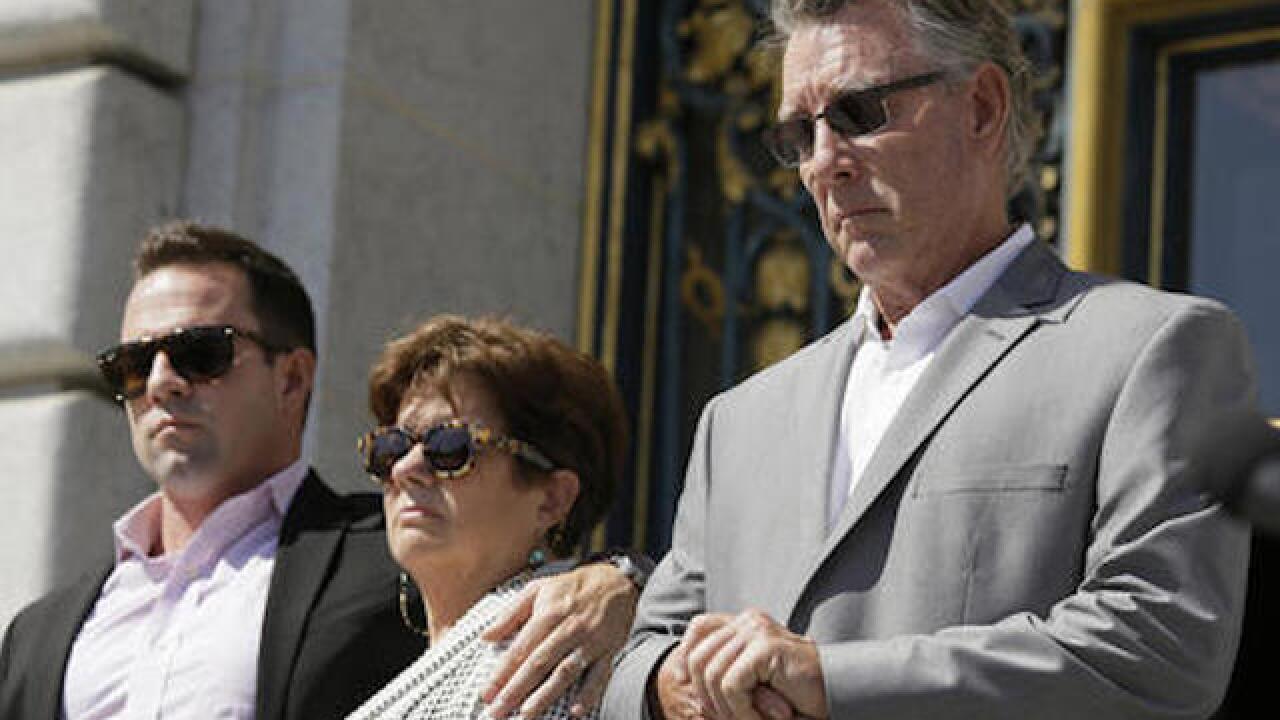 Copyright Associated Press
Eric Risberg
<p>In this Sept. 1, 2015 file photo, from left, Brad Steinle, Liz Sullivan and Jim Steinle, the brother, mother and father of Kathryn Steinle who was shot to death on a pier, listen to their attorneys speak during a news conference on the steps of City Hall in San Francisco. San Francisco supervisors vote Tuesday, May 10, 2016, on a proposal to further tighten the city's sanctuary ordinance, allowing cooperation with federal immigration authorities only in very limited cases involving violent felons. (AP Photo/Eric Risberg)</p>

SAN FRANCISCO (AP) — Nearly a year after a shooting death along a San Francisco pier sparked a national debate on how the city handles criminal suspects in the country illegally, officials are considering a proposal that would clarify the guidelines under which federal deportation authorities could be contacted.

On Tuesday, the San Francisco Board of Supervisors are to vote on a proposal that directs law officers to notify Immigration and Customs Enforcement only if the person detained is charged with a violent crime and has been convicted of a violent crime within the last seven years.

Current San Francisco law contains leeway for city employees to contact ICE when they encounter people who are living in the country illegally and not in jail. For those in custody, the previous sheriff, Ross Mirkarimi, required federal officials to get a warrant or court notice to hold an inmate facing possible deportation and forbade staff from talking to immigration authorities.

The new sheriff repealed the communication ban, but the San Francisco Sheriff's Department generally does not cooperate with ICE.

The vote comes after the shooting death of a 32-year-old woman walking along a San Francisco pier. Kate Steinle was shot by a Mexican national facing drug charges who had been released from San Francisco's jail despite a federal request to keep him in custody for deportation. The backlash against city leaders was fierce.

Republicans in Congress sought to punish cities like San Francisco, which is among hundreds of jurisdictions that decline to honor federal immigration requests, or "detainers." Even prominent Democrats, such as Sen. Dianne Feinstein, criticized Mirkarimi, saying repeat drug offender Juan Francisco Sanchez-Lopez should have been detained.

Supervisor John Avalos, the legislation's chief sponsor and longtime immigration advocate, said the ordinance reaffirms the message to immigrants that they won't be deported for reporting a crime or cooperating with police. "We want to keep that clear separation," he said.

Sheriff Vicki Hennessy, who took office in January, opposes the legislation, saying that she should have discretion about when to notify federal immigration officials. As a constitutionally elected official, she doesn't have to follow board orders.

Under the proposed ordinance, Steinle's accused killer would still have been released from jail.

Sanctuary-city critics continue to chastise San Francisco officials. But immigration advocates say a bright-line rule is needed to protect people such as Pedro Figueroa-Zarceno. The El Salvador native is in deportation proceedings after going to San Francisco police last year to report his car missing. He was in custody for two months.

"What happened to me was an injustice," he said through an interpreter Monday. "They unjustly deprived me of my liberties for two months."