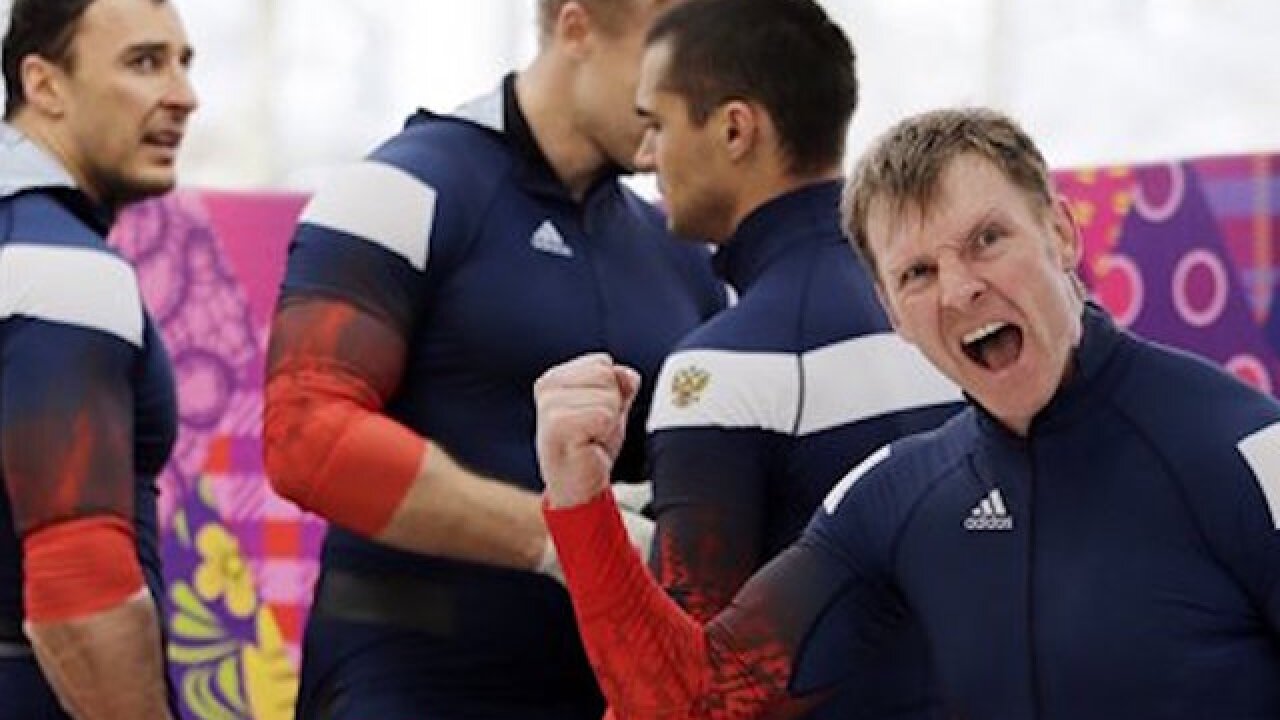 Copyright Associated Press
Jae C. Hong
<p>In this Sunday, Feb. 23, 2014 file photo, the team from Russia RUS-1 with Alexander Zubkov, foreground, Alexey Negodaylo, Dmitry Trunenkov, and Alexey Voevoda, react after their third run during the men's four-man bobsled competition final at the 2014 Winter Olympics, in Krasnaya Polyana, Russia. Two Olympic gold medallists deny doping after they were named in a New York Times report as having been on a list of doped athletes allegedly compiled by the Russian Sports Ministry. Bobsledder Alexander Zubkov told the state TV that he was clean during the Sochi Olympics. (AP Photo/Jae C. Hong)</p>

MOSCOW (AP) — Two Olympic gold medalists from Russia denied doping Friday, a day after they were identified in a newspaper report detailing state-sponsored cheating at the 2014 Sochi Games.

Bobsled champion Alexander Zubkov and cross-country skier Alexander Legkov were among the athletes accused of doping by the former head of the Russian national drug-testing laboratory in a New York Times article .

"I considering it an accusation not supported by anything," Zubkov said, calling the story "simply lunacy."

At a news conference in Moscow, Zubkov and Legkov sat on either side of deputy Sports Minister Yuri Nagornykh, who denied Russia had ever operated a state doping program.

Legkov waved a thick folder of papers that he said contained the records of all his doping tests over three years. The sheer number of tests was evidence enough that he could not have taken banned drugs without being caught, he said.

"You'd have to be a complete kamikaze to do that in Russia if you're an athlete representing our nation," Legkov said.

The article also brought a strong response from the Kremlin. Russian President Vladimir Putin's spokesman denounced the allegations as "a turncoat's libel."

Grigory Rodchenkov, the former head of the Russian lab now living in Los Angeles, told the Times he was given a spreadsheet of doping athletes by the Sports Ministry before the games. It allegedly bore the names of 15 athletes who later won medals, including Zubkov and Legkov.

The spreadsheet was not published and The Associated Press could not verify it.

Rodchenkov said he then switched tainted urine samples for clean ones at the doping lab used for the Sochi Games, with help from people he believed to be officers of the Russian security services.

Zubkov and Legkov, who both threatened to sue Rodchenkov for defamation, are two of Russia's most prominent winter sports athletes.

Zubkov carried the Russian flag at the opening ceremony for the Sochi Olympics and won gold in the two-man and four-man bobsled events at age 39, becoming one of the oldest pilots to win an Olympic event.

Legkov won gold in the men's 50-kilometer cross-country mass start on the last day of the games and was given his gold medal at the closing ceremony.

"It just seems like, you know, some kind of a turncoat's libel," Peskov said, without mentioning Rodchenkov by name. "I wouldn't put trust in such unfounded claims."

The government continues to back Sports Minister Vitaly Mutko, Peskov added. He also said the Kremlin backs the idea of legal action against Rodchenkov.

"We would potentially support such action to file lawsuits against this gentleman and against the publications, which are spreading this slander," he said.

The deputy sports minister, Nagornykh, said there is no way that Russia could have manipulated doping samples at the Sochi Games because of the presence of foreign observers.

"(Russia) did not have the opportunity to influence in any way the system of doping control procedures, storage and transport," Nagornykh said.

He also denied allegations in the Times article that he had met regularly with Rodchenkov to discuss a secret doping program leading to the Olympics.

The World Anti-Doping Agency is set to investigate Rodchenkov's allegations, and Rodchenkov himself has volunteered to identify which samples he tampered with.

The IOC told the AP on Friday that "we are already in touch with WADA to discuss the offer of Mr. Rodchenkov to provide information on his claims."

The IOC said it would "welcome any evidence that will help to determine the truth or otherwise of these allegations," adding that if wrongdoing is uncovered it "will not hesitate to act decisively to punish those responsible and to defend the clean athletes."