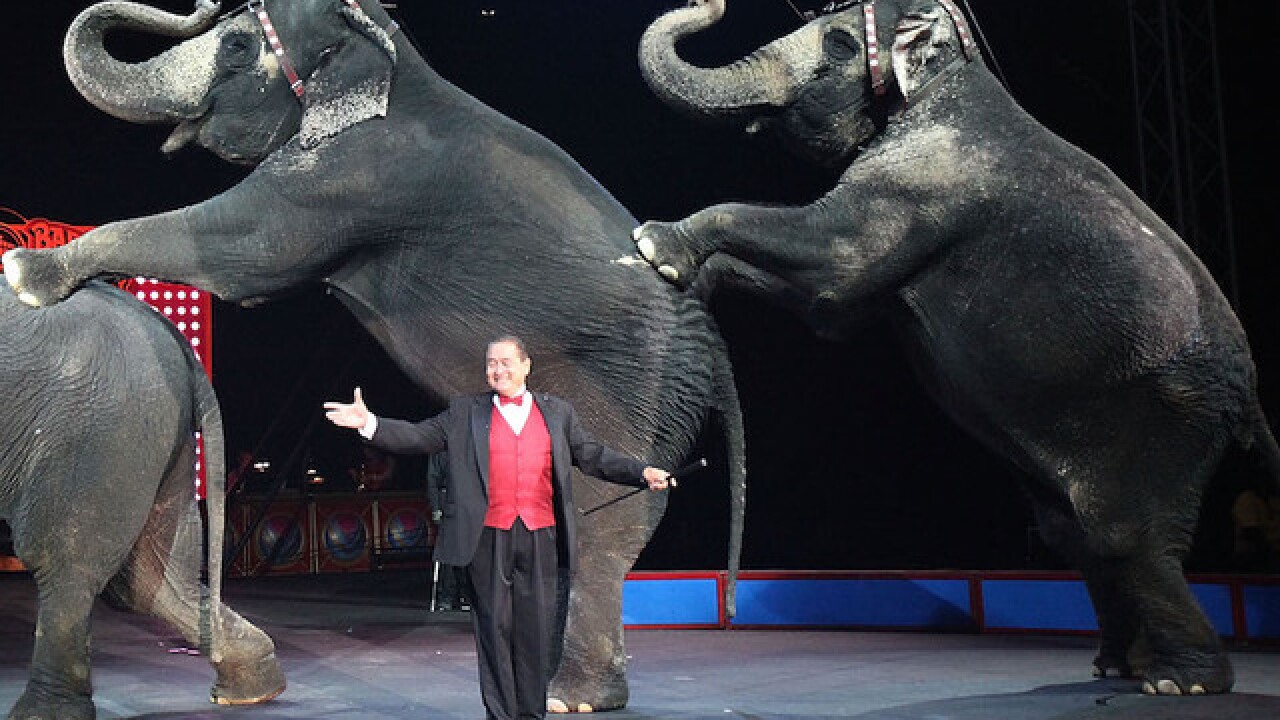 Copyright Getty Images
Mario Tama
<p>Elephants appear in an act for the Ringling Bros. and Barnum & Bailey Circus on June 18, 2009 in New York, New York. The circus announced Thursday that it will stop using elephants in its shows by 2018.</p>

PROVIDENCE, R.I. (AP) — Elephants will perform for the last time at the Ringling Bros. and Barnum & Bailey Circus on Sunday, as the show closes its own chapter on a controversial practice that has entertained audiences since circuses began in America two centuries ago.

Six Asian elephants will deliver their final performances in Providence, Rhode Island, and five will perform in Wilkes Barre, Pennsylvania, during several shows on Sunday. The last Providence show will stream live on Facebook and at Ringling.com at 7:45 p.m .

Alana Feld, executive vice president of Feld Entertainment, which owns the circus, said the animals will live at its 200-acre Center for Elephant Conservation in Florida. Its herd of 40 Asian elephants, the largest in North America, will continue a breeding program and be used in a pediatric cancer research project.

Elephants have been used in the circus in America for more than 200 years. In the early 1800s, Hackaliah Bailey added the elephant "Old Bet" to his circus. P.T. Barnum added the African elephant he named "Jumbo" to "The Greatest Show on Earth" in 1882.

The Humane Society says more than a dozen circuses in the United States continue to use elephants. But none tour as widely or are as well- known as Ringling Bros.

It's also getting more difficult for circuses to tour with elephants. Dozens of cities have banned the use of bullhooks — used to train elephants — and some states are considering such legislation.

Just as in the Disney movie "Dumbo," elephants in the past have been dressed up as people and trained to do a range of tricks: play baseball, ride bicycles, play musical instruments, wear wedding dresses or dress in mourning clothes, said Ronald B. Tobias, author of the 2013 book "Behemoth: The History of the Elephant in America."

The change at Ringling signifies a shift in Americans' understanding of elephants, Tobias said. People no longer see elephants as circus performers, he said, "but sentient animals that are capable of a full range of human emotions."

Attitudes are shifting about other animals as well. Last month, Sea World announced it would end live orca shows and breeding. Ringling will continue to use animals including horses, lions, tigers, dogs and kangaroos in its shows, Feld said.

The Humane Society has called for an end to the breeding program and for Ringling to retire the animals to one of two accredited sanctuaries, one in California and one in Tennessee, both of which have more than 2,000 acres of land.

Feld said they have the most successful breeding program in North America and have determined they can accommodate the elephants in the space they have. In 2014, Feld Entertainment won more than $25 million in settlements from animal-rights groups, including the Humane Society, over unproven allegations of mistreated elephants.

Tobias said as attitudes have changed, people are more interested in seeing elephants in a natural habitat such as a sanctuary, rather than in a circus or zoo.

"I think people will get a lot more satisfaction out of elephants living their real lives than to see them performing as clowns," Tobias said. "It's kind of a new age in our understanding and sympathy and empathy toward elephants."