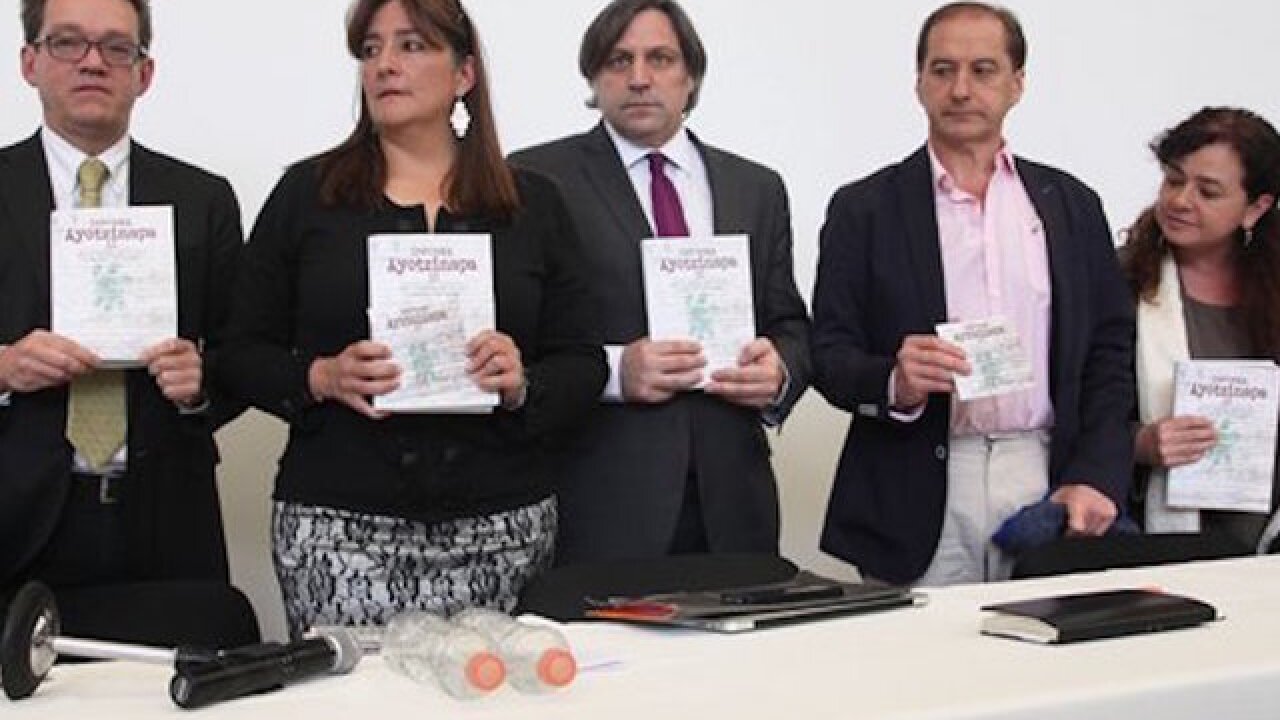 Marco Ugarte
<p>Alejandro Valencia, left, Angela Buitrago, second left, Francisco Cox, center, Carlos Beritain, second right, and Claudia Paz, of the international experts group hold copies of their final report in the disappearance of 43 students, in Mexico City, Sunday, April 24, 2016. The report says there is evidence that Mexican police tortured some of the key suspects arrested in the disappearance of the students. The 43 students have not been heard from since they were taken by local police in September 2014 in the city of Iguala, Guerrero state. (AP Photo/Marco Ugarte)</p>

MEXICO CITY (AP) — There is strong evidence that Mexican police tortured some of the key suspects arrested in the disappearance of 43 students, according to a report released Sunday by an outside group of experts.

The Inter-American Commission on Human Rights expert group says that a study of 17 of the approximately 123 suspects arrested in the case showed signs of beatings, including, in some cases, dozens of bruises, cuts and scrapes.

One suspect said he was nearly asphyxiated with a plastic bag, and medical studies showed another had been slapped on the ears so hard his eardrums broke and his ears bled.

The Mexican government recently released documents suggesting investigations had been opened against police and military personnel, but authorities have not answered requests about whether anyone has been arrested or charged.

The 43 students at the radical teachers' college of Ayotzinapa have not been heard from since they were taken by local police in September 2014 in the city of Iguala, Guerrero state. Family members and supporters of the missing students chanted "They took them away alive, we want them back alive!" at the news conference where the report was presented.

No high-ranking officials attended the presentation of the report, which called the government's investigation flawed and incomplete. But President Enrique Pena Nieto wrote in his Twitter account that the federal attorney general's office "will analyze the whole report, to aid in its investigations."

Mexico's deputy attorney general for human rights, Eber Betanzos, said authorities were investigating complaints filed by 31 people who said they had been tortured; he said six criminal cases had been opened, and had that three involved employees of the attorney general's office.

Betanzos called the case "the most exhaustive investigation in the history of Mexican law enforcement."

But the allegations of torture could endanger any chance of convictions in one of the highest-profile human rights cases in Mexican history, especially because the government's version of events — that corrupt police handed the students over to drug gang members who killed them and burned their bodies at a trash dump — hangs in large part on the testimony of some drug gunmen who now say they were tortured into confessing.

"It is a lie the way they said they caught us," Patricio Reyes Landa said in testimony made public by the experts' report. "They went into the house, beating and kicking. They hauled me aboard a vehicle, they blindfolded me, tied my feet and hands, they began beating me again and gave me electric shocks, they put a rag over my nose and poured water on it. They gave me shocks on the inside of my mouth and my testicles. They put a bag over my face so I couldn't breathe. It went on for hours."

Mexican judges are instructed to throw out confessions based on torture; Betanzos said the government's case was not solely based on confessions.

The group of experts complained the government was slow to deliver some of the evidence it had asked for; it criticized government prosecutor's investigations as flawed and incomplete, and suggested that the government wanted to stick to its version, without investigating possible involvement by federal police and the army.

For example, the report said, the roadblocks set up on local highways around the city of Iguala on the night of the disappearances were far more extensive than previously thought. The roadblocks were apparently coordinated by the Guerreros Unidos drug cartel to trap rivals; the gang may have thought the students were part of a rival cartel.

The report criticized the forensics investigations of human remains and evidence of fire at the garbage dump in the town of Cocula, Guerrero, saying that prosecutors had provided little evidence there ever could have been a fire a big enough at the site.

"It is clear that there was a latent rejection of any version other than the burning of the students at the Cocula dump, and they turned back to that scenario time after time, without investigating other police forces or state actors," the group said in its final report. Its mandate expires at the end of this month, and it leaves Mexico with the crime still largely unresolved; only one student has been identified from charred bone fragments found in a river near the dump.

The foot-dragging by prosecutors "cannot be seen as partial or improvised obstacles," said the report. "These different situations aren't casual barriers, they are structural barriers to the investigation."

The report also found that one student sent a message to his parents from his cellphone hours after he had supposedly been killed.

But the "significant evidence of torture and abuse" of the suspects was the report's most damning element.

For example, the medical reports on one suspect whose testimony was key for the government's case, Agustin Garcia Reyes, claimed he had one injury, a bruise, after marines took him into custody. But hours later when he was turned over to civilian prosecutors, they said he had 30 bruises, scrapes and scabs.

"There seems to be no limit to the Mexican government's utter determination to sweep the Ayotzinapa tragedy under the carpet," wrote Amnesty International's Americas director Erika Guevara-Rosas.

Daniel Wilkinson, deputy director of Human Rights Watch's Americas division, wrote that while the experts had been critical of the government investigation before, the new report "goes much further in presenting evidence of obstruction, of manipulation of evidence and even torture."

"Based on all the ways the government has obstructed the work of the group it seems clear that the reason they brought them in was never to solve the case, but rather to do PR, to do damage control in the face of the public outrage at their handling of the case," Wilkinson wrote. "If that was the calculation, clearly they miscalculated."