Rare conviction made in shooting by Virginia police officer 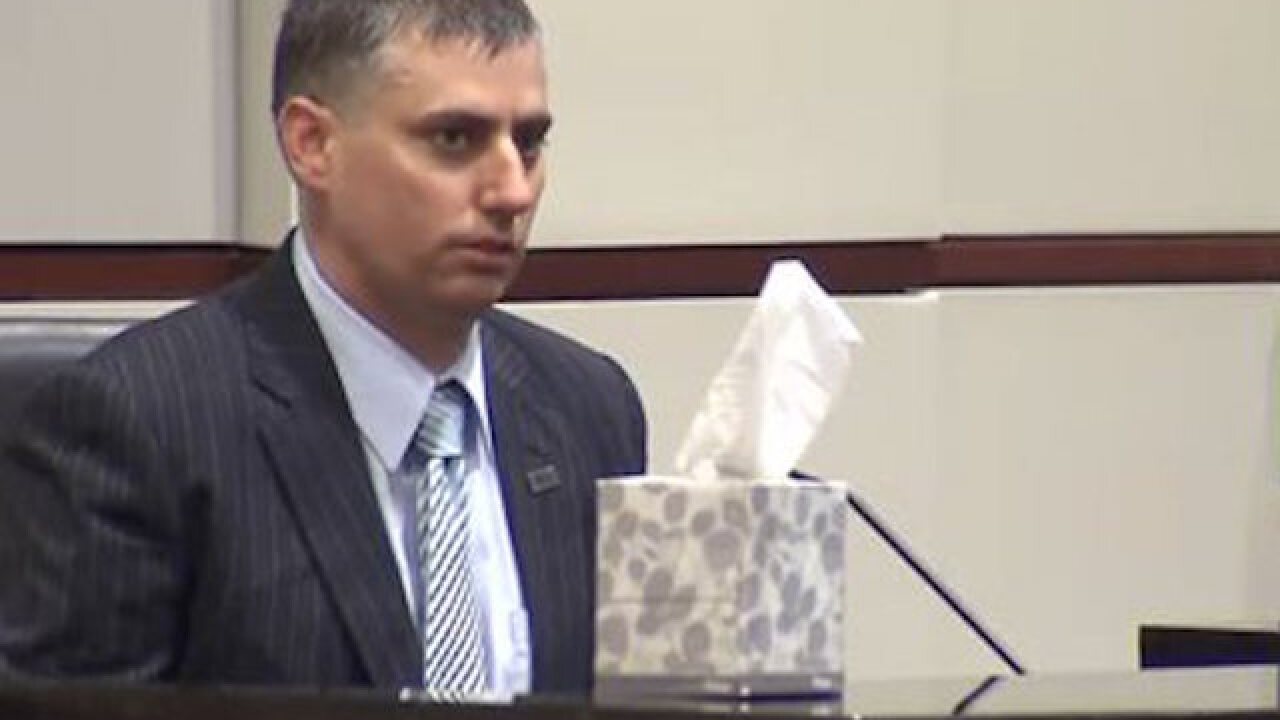 Copyright Associated Press
Image from video
<p>In this image made from a video, former police officer Stephen Rankin answers questions from the prosecution during the penalty phase of the his trial Thursday, Aug. 4, 2016, in Portsmouth, Va. A jury convicted Rankin of voluntary manslaughter on Thursday in the shooting death of an unarmed black man who had been accused of shoplifting. (The Virginian-Pilot via AP, Pool)</p>

But the guilty verdict Thursday was for voluntary manslaughter, a lesser charge than the original first-degree murder count. And the jury recommended a 2 ½ year prison sentence for Stephen Rankin, a punishment far below the decade prosecutors had sought.

The outcome is typical of the rare conviction that follows a shooting by police, said Philip Stinson, a criminal justice professor at Bowling Green State University in Ohio.

Juries are very reluctant to convict on-duty officers of murder "because they all recognize that policing is difficult and violent," Stinson said.

In a similar case in Baltimore on Thursday, a jury convicted a police officer of assault for shooting an unarmed burglary suspect. He was originally charged with attempted murder.

Stinson says too little data exists to predict any kind of trend. But the black community in Portsmouth, Virginia, hoped the murder trial of Rankin, 36, would be a turning point toward more accountability.

"The sentence was not enough," said Earl Lewis Jr., a cousin of the 18-year-old who died, William Chapman II. "This basically says to police officers that it's still all right to kill."

Rankin's formal sentencing is scheduled for Oct. 12. A judge cannot increase the jury's recommended sentence, but he could reduce it.

Rankin's attorneys said they plan to appeal. Among their concerns was their inability to use what they said was Chapman's violent juvenile history during the trial.

Rankin shot Chapman in the face and chest outside a Wal-Mart store last year after a security guard had called police to go after the young man.

No video recorded the actual killing, and testimony on the details of what happened was conflicting. But most witnesses said Chapman had his hands up, and prosecutor Stephanie Morales said the officer could have used force that was not deadly.

The officer "brought a gun into what is at worst a fist fight," Morales told the jury, which deliberated for nearly two days before returning its verdict.

Rankin, who was fired from the Portsmouth police force after being indicted, had already killed another unarmed suspect four years earlier. But he had been cleared of wrongdoing and the incident was inadmissible at trial.

Rankin's lawyers said Chapman's death had nothing to do with any other police shootings.

"I think this is a terrible tragedy; I wish it had never happened. I wish none of it had ever occurred," Rankin testified after being found guilty.

"I can't begin to fathom how much pain that family is going through. I wish I could have done more to keep him alive," he added.

During his trial, Rankin testified that he calmly approached Chapman to discuss the shoplifting accusation and was preparing to handcuff him when the teen refused to comply with orders and a struggle ensued. He said he used his stun gun on him, but Chapman knocked it away. Both men then faced each other from a short distance away.

That's when he drew his pistol, Rankin said, and repeatedly commanded Chapman to "get on the ground." Instead, he said Chapman screamed "shoot me" several times before charging at him from about 6 feet away. He said he experienced "tunnel vision" at that point and, fearing for his life, fired twice to stop him.

"I had no reason to think he was going to stop attacking me," Rankin said. "I was scared."

Rankin's attorney, James Broccoletti, argued that the officer had to shoot because "everything he tried to do didn't work."

Some witnesses backed Rankin's testimony. Paul Akey, a construction worker who was nearby, said Chapman "went after the officer with throwing fists, and it looked like he knocked a Taser out of the officer's hands."

But Gregory Provo, the Wal-Mart security guard who reported Chapman to police, testified that Chapman never charged at the officer. He said Chapman raised both fists like a boxer and asked if the officer was going to shoot him before Rankin fired at him from about 5 yards away.

Criminal justice professor Stinson said on-duty officers kill about 1,000 suspects a year in the United States, but only 74 have been charged since 2005. A third of these were convicted, a third were not and the other cases are pending.

The killing of Chapman "would not have gotten this kind of attention five years ago," Stinson said, but now use-of-force complaints are coming under more scrutiny.