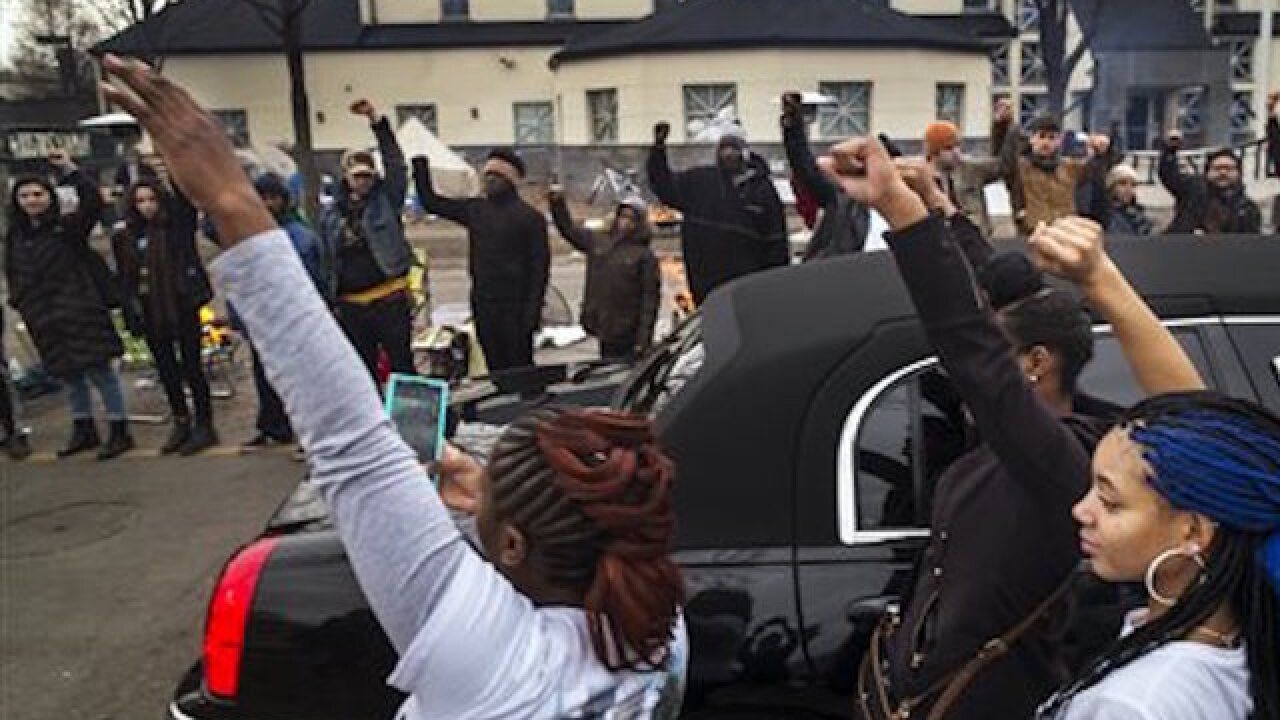 MINNEAPOLIS (AP) — Four men were charged Monday in last week's shooting of demonstrators protesting the killing of a black man by Minneapolis police, while the city's mayor separately asked the protesters to end their weekslong encampment at a police precinct.

Protesters have been at the 4th Precinct since Jamar Clark, 24, was shot Nov. 15 during what authorities said was a struggle with police. Clark died the next day. Some who said they saw the shooting allege he was handcuffed, which police dispute. State and federal investigations are underway.

Protesters have erected about two dozen tents and canopy shelters at the police station, and they have barricaded the street with lumber and pallets. During a snowy Monday morning, about seven campfires were burning to warm those who were milling about.

Minneapolis Mayor Betsy Hodges said Monday the encampment has become unsafe. She said campfires are making the air harmful to neighboring children and older people with respiratory problems, and the barricades are blocking access for emergency vehicles and snowplows.

But protesters have vowed to stay at the precinct despite the cold weather and last week's shooting that left five black men with injuries that weren't life-threatening. One of the injured men, Wesley Martin, said protesters would stand their ground.

"They can have the street. We can take the sidewalk," Martin said. "To be honest, we're not going nowhere."

Allen Lawrence Scarsella, 23, of Lakeville, was charged Monday with five counts of assault with a dangerous weapon and one count of riot in last week's shooting. Three other men — Nathan Wayne Gustavsson, 21, of Hermantown; Daniel Thomas Macey, 26, of Pine City; and Joseph Martin Backman, 27, of Eagan — were also charged with riot.

Hennepin County Attorney Mike Freeman said he filed the toughest charges possible in what he called a racially motivated attack, saying the felonies carry tougher potential sentences than any kind of hate crime-related charge. Police have said Scarsella, Gustavsson and Backman are white, while Macey is Asian.

All four men are in custody and will make their first court appearances Tuesday. Authorities said the men had attorneys, but it wasn't immediately clear who those were.

According to the criminal complaints, the group went to the protest Nov. 23 with plans to stir things up. A group of protesters tried to escort them away before eight shots rang out.

A search warrant says that after the shooting, Scarsella called an old high school friend who is a Mankato police officer and confessed. That officer told investigators that Scarsella has negative opinions about blacks, the complaint said.

According to the criminal complaint, it wasn't Scarsella's first time at the protest. He and another friend, identified as J.S., went to the precinct Nov. 19 wearing camouflage clothing and face masks, and made a video en route that contained derogatory terms. In the video, J.S. displayed a handgun and ended the recording with the words "stay white," the complaint said.

The two officers involved in Clark's shooting are on paid leave. A lawsuit that was transferred to federal court last week shows that one of the officers, Dustin Schwarze, was sued just 10 days before Clark's shooting for allegedly using excessive force during an arrest four years ago.

The lawsuit alleges that when Schwarze worked for Richfield police he used a stun gun on a vehicle passenger during a December 2011 traffic stop. The lawsuit says Schwarze also threatened to beat that passenger and another if they left the vehicle.

The lawsuit also names the city of Richfield and two other officers. Daniel Kurtz, an attorney for Schwarze, said the plaintiff had kicked an officer in the face and the officers used reasonable force to arrest him.