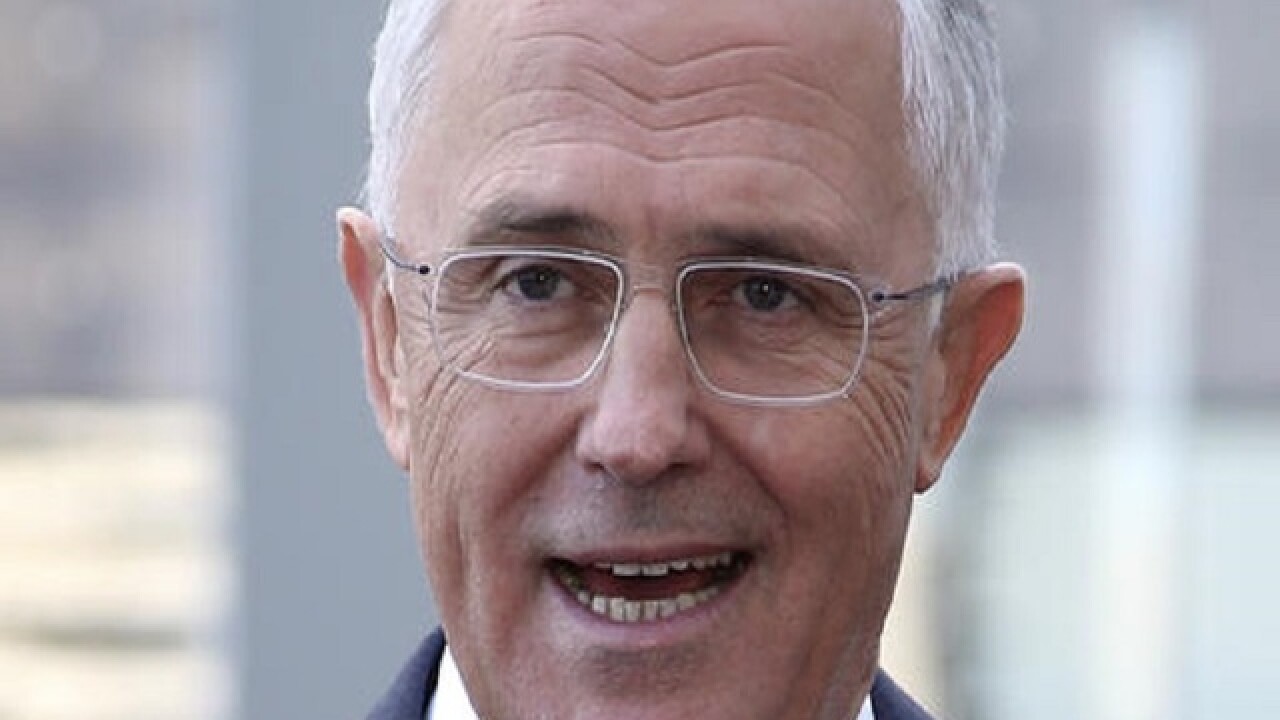 Rick Rycroft
<p>FILE - In this March 23, 2016, file photo, Australian Prime Minister Malcolm Turnbull speaks at a press conference in Sydney. Australia announced Tuesday, April 26, 2016, that French company DCNS had beat bidders from Japan and Germany to build the next generation of submarines in Australia's largest-ever defense contract. Turnbull said the French-designed submarines would be built in the Australian manufacturing hub of Adelaide. (AP Photo/Rick Rycroft, File)</p>

By: Associated Press
Posted at 11:03 PM, May 03, 2016
CANBERRA, Australia (AP) — Australia's election campaign will officially start soon with climate change policy and union corruption in the national building industry shaping into key battlegrounds for the July 2 poll.
Prime Minister Malcolm Turnbull said Wednesday that he was likely to visit Governor-General Peter Cosgrove this weekend to lock down the date and officially start the election campaign.
A heartening historical fact for Turnbull is that no Australian federal government has lost power after a single three-year term since the tumultuous early years of the Great Depression. But Australia is now in an extraordinary era of political volatility as it grapples to diversify an economy that thrived on a mining boom that has gone bust. If the opposition center-left Labor Party wins the election, it will mean Australia's fifth change of prime minister in six years.
Turnbull replaced his unpopular predecessor Tony Abbott in a leadership ballot of lawmakers in the ruling center-right Liberal Party in September, only two years after the coalition government was elected.
The change of prime minister immediately boosted the government's standing in opinion polls, but recent polls suggest the government is now running neck-and-neck with Labor.
Ostensibly Turnbull has called an early election because a hostile senate has refused to pass legislation that would allow the government to create a building industry watchdog called the Australian Building and Construction Commission. The ABCC was disbanded in 2012 by a former Labor government, which is linked to the trade union movement.
While the plight of the ABCC seems an obscure issue to most voters, the political debate focuses attention on opposition leader Bill Shorten's history as a union official.
Before he entered parliament in 2007, Shorten was a senior official of the Australian Workers Union, one of five unions targeted by government-commissioned inquiry into union corruption. Labor condemned the inquiry as a politically motivated witch hunt.
Shorten rejected suggestions by inquiry lawyers that he had had conflicts of interests when companies made donations to his union while he was negotiating with them over workers' pay. Even Labor supporters criticized him over news of the donations.
Australian National University political scientist John Wanna expects Turnbull will use the issue to focus on Shorten's union past during the campaign.
"He's going to turn the attack on Shorten: 'You're just a union thug; you're just a union hack; you've blocked us from bringing in a measure that would have made unions more accountable,'" Wanna said.
Labor is expected to exploit Turnbull's past support for Australia adopting an emissions trading system to cut greenhouse gas pollution. Australia, on a per capita basis, is among the world's worst polluters.
Turnbull's support in 2009 for a then Labor government's proposal to introduce an emissions trading scheme cost him the leadership of the Liberal Party.
He was replaced by Abbott, who repealed a two-year-old carbon tax in 2014. The tax paid by Australia's worst industrial polluters had been due that year to transition into an emissions trading scheme with market forces determining the price of a ton of carbon.
Labor again wants the emissions trading scheme to replace the government's so-called Direct Action policy of paying polluters taxpayer-funded incentives to operate more cleanly, and Shorten has been reminding the public that Turnbull once described Direct Action as "an environmental fig leaf to hide a determination to do nothing."
Turnbull's coalition currently holds 90 of 150 seats in the House of Representatives, while Labor has 55 seats.
Turnbull will be hoping that the early election will not only return his government but provide him with a more compliant senate that is more likely to pass his legislative agenda.
All 76 senate seats are up for grabs. The government currently holds 33 senate seats, Labor holds 25 and the left-wing Greens party holds 10. The remaining eight are either independents or sole senators representing minor parties.
Associated Press 2016