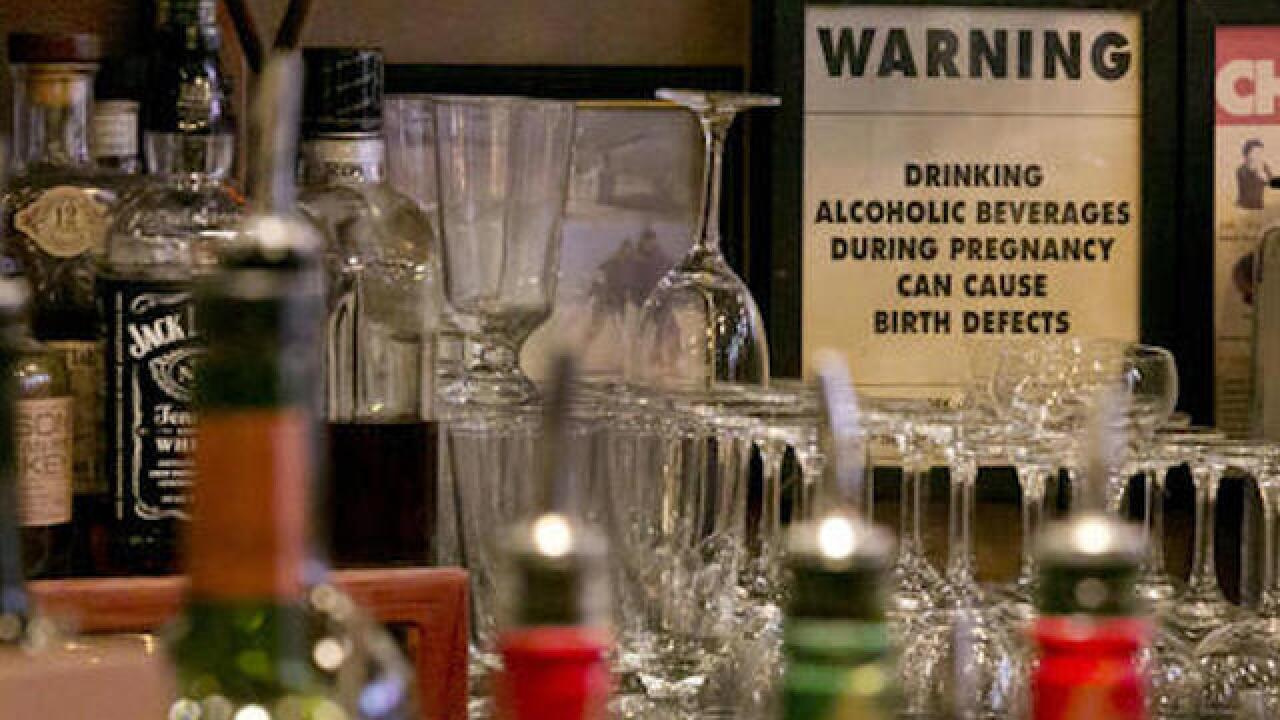 Copyright Associated Press
Richard Drew
<p>The drinking and pregnancy warning notice is posted behind the bar at the Vintry, in New York's Financial District, Friday, May 6, 2016. Pregnant women can't be barred from New York City bars or refused alcoholic drinks just because they're expecting, under new official guidance on a city rights law. Human Rights Commission officials say they're not saying that expectant mothers should drink, but that such health decisions are up to the woman, not a bartender. (AP Photo/Richard Drew)</p>

NEW YORK (AP) — A pregnant woman shows up at a New York City bar and wants to go in and order a drink despite health warnings against consuming alcohol while expecting. Should the tavern serve her?

It's against the law to refuse, under guidelines the city Human Rights Commission released Friday to help people interpret a 2013 city law. It centers on expansive protections for pregnant workers, but the guidelines also say mothers-to-be can't be kept out of New York City bars or denied alcoholic drinks just because they're expecting.

"Judgments and stereotypes about how pregnant individuals should behave, their physical capabilities and what is or is not healthy for a fetus are pervasive in our society and cannot be used as pretext for unlawful discriminatory decisions" in public venues, the new guidelines say.

With that, the city is squarely taking on a touchy subject that stirs conflicted feelings about pregnancy and personal autonomy. While actual complaints from pregnant New Yorkers about bar policies may be uncommon, they aren't unheard of: The commission is looking into one case concerning a pregnant woman denied entry to a bar or club, said Lauren Elfant, an agency lawyer. She wouldn't give more detail because the case is open.

And some pregnant women who haven't been refused service say they've felt awkward when, for example, they're at a restaurant table that's sharing a bottle of wine and a server makes a point of asking how many glasses to bring.

She ordered a glass of wine on rare occasion during her pregnancy, which wouldn't raise eyebrows in her native Spain. No one ever questioned her order, but she felt that "in general, a lot of people are paying attention to whether you're drinking or not drinking."

How to treat pregnant women who use intoxicants of various sorts has long been debated in the U.S. Some states have laws allowing authorities to bring criminal charges against women who use illegal drugs while pregnant or to detain expectant mothers whose heavy drinking poses a substantial risk to their unborn children's health. And the pregnant drinker has been portrayed as a moral dilemma in such forums as the ABC hidden-camera show "What Would You Do?" which featured a 2010 episode showing bar patrons' varied reactions to an actress who appeared to be a pregnant woman unabashedly guzzling tequila.

The U.S. Surgeon General and major medical associations say women should avoid alcohol during pregnancy. An American Academy of Pediatrics report in October reiterated the group's view that no amount of drinking during pregnancy should be considered safe.

New York City requires restaurants to post warnings that drinking alcohol during pregnancy can cause birth defects. But such health decisions are up to the woman, not the bartender, rights commission officials say.

So does Michael Sinensky, who owns a dozen bars and clubs in and around New York City.

"I wouldn't preach to my staff not to serve pregnant women," says Sinensky, a father of three.

But some other bar owners find the issue trickier.

"I sort of believe that the mother should be responsible," says Dan Warren, an owner of West 3rd Common, a downtown Manhattan bar. But if a pregnant woman ordered multiple drinks, "I'd probably be tempted to say something."

Going beyond federal law, New York City requires all but very small employers to accommodate reasonable pregnancy-related requests — such as minor work schedule changes or letting workers eat at their desks — even if other employees can't do the same without a doctor's note saying they need it. There are exceptions if accommodating the expectant mother would unduly strain the employer financially, among other exemptions.

"Far too often, pregnant employees are denied basic accommodations in the workplace, unnecessarily putting their pregnancy and health at risk," Carmelyn Malalis, Human Rights commissioner and chairwoman, said in a statement.