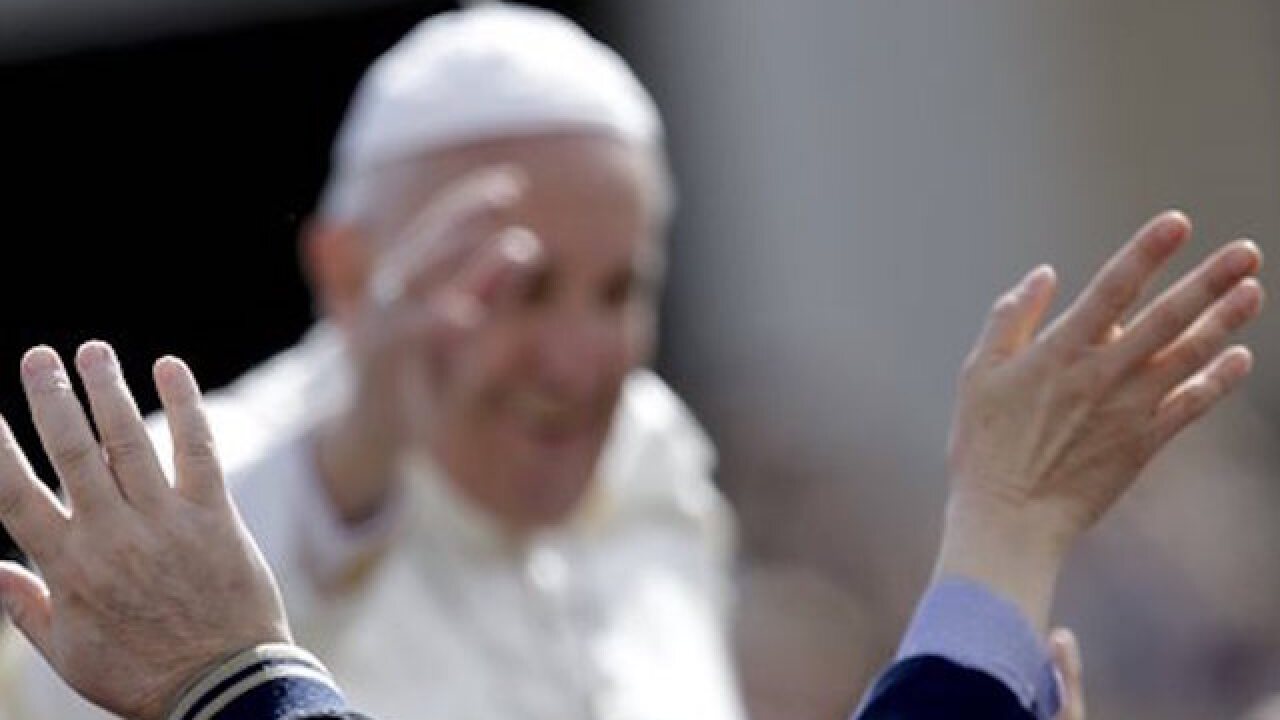 Copyright Associated Press
Gregorio Borgia
<p>Pilgrims wave their hands as Pope Francis blesses faithful upon his arrival in St. Peter's Square to attend a jubilee audience at the Vatican, Saturday, April 9, 2016. Pope Francis said Friday that Catholics should look to their own consciences rather than rely exclusively on church rules to negotiate the complexities of sex, marriage and family life, demanding the church shift emphasis from doctrine to mercy in confronting some of the thorniest issues facing the faithful. (AP Photo/Gregorio Borgia)</p>

VATICAN CITY (AP) — Pope Francis has accepted the resignation of his ambassador to the United States who was behind Francis' controversial meeting with Kim Davis, the Kentucky clerk who went to jail rather than comply with a court order to issue same-sex marriage licenses.

Archbishop Carlo Maria Vigano, 75, had submitted his resignation in January after he reached the mandatory retirement age for bishops.

On Tuesday, Francis accepted it and named his ambassador to Mexico, the French Monsignor Christophe Pierre, to replace Vigano in the Holy See's highest-profile diplomatic posting.

Vigano had invited Davis to be among those greeting Francis in the Vatican embassy in Washington last September during his visit to the country. Her lawyer caused an uproar when he announced the meeting shortly after Francis returned to Rome, describing it as papal affirmation of Davis' approach to conscientious objection.

The Vatican insisted the meeting was no such thing and that Davis was merely one of many people who were at the embassy that day. An incensed Vatican ultimately said Francis had only one private audience during his visit to Washington: With his openly gay former student and his partner.

Even before the Davis affair, Vigano stirred controversy and was best known for his role in the first Vatileaks scandal. The scandal, which helped bring about Pope Benedict XVI's resignation, began in 2012 when an Italian journalist broadcast letters from Vigano, then the No. 2 Vatican administrator, to Benedict. In the letters, Vigano begged not to be transferred to Washington for having exposed alleged corruption in the Vatican administration that cost the Holy See millions of euros.

Despite his protests, Vigano was sent to Washington to become ambassador in 2011.

During his term, he strongly took up the religious liberty cause championed by U.S. bishops, suggesting that he might well have supported Davis in her battle over gay marriage. In a 2012 speech to the University of Notre Dame, Vigano denounced threats to religious liberty in the U.S. and abroad, citing a public school curriculum presenting same-sex relations as "natural and wholesome."

Last year, he received two standing ovations from U.S. bishops at their conference after a speech in which he urged them to persevere in working to "preserve a moral order in society" and not "fall prey" to "secularized and increasingly pagan" practices in broader society.

Pierre, 70, has been nuncio to Mexico since 2007 and helped organize Francis' recent trip to the country. Previously he was ambassador to Haiti and Uganda.