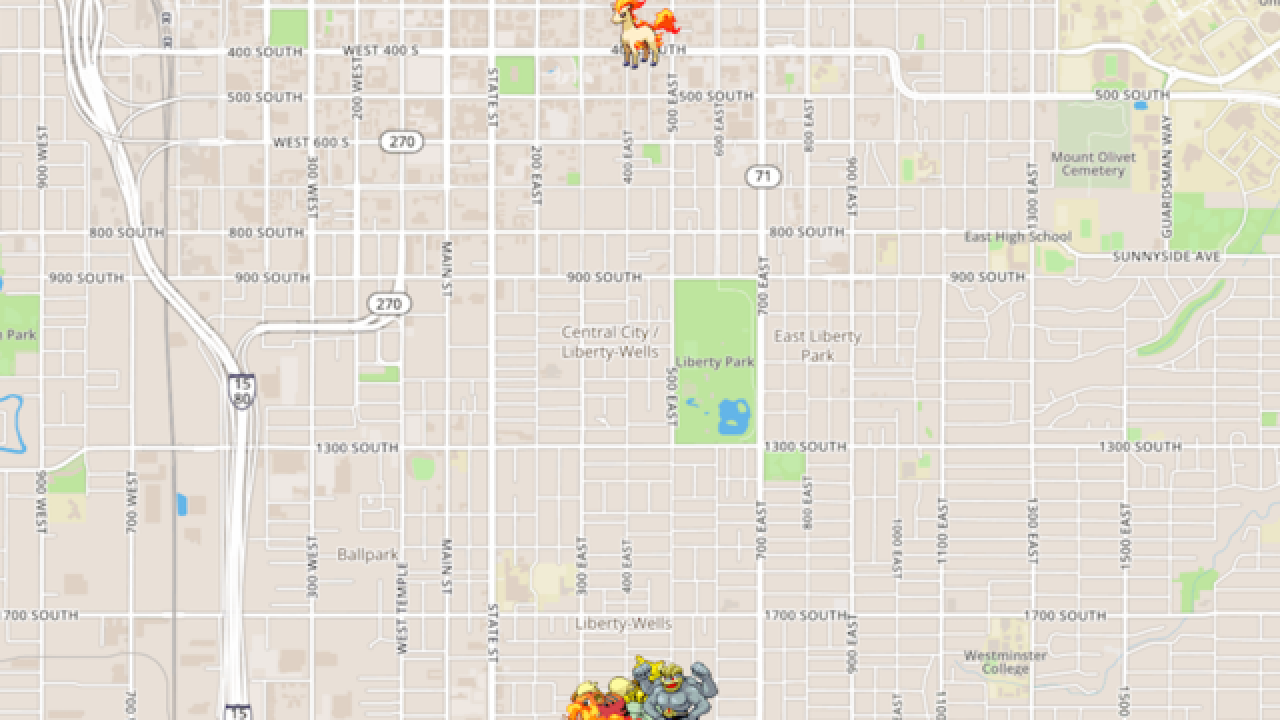 Amy Iverson, Deseret News
<p class="p1"><span class="s1">A search for all pokémon around Salt Lake City is shown in this screenshot from the Poke Radar app.</span></p>

The outburst came quickly and out of nowhere: “Onix, Onix! Turn right!”

This was not the first or the last time a kid had screamed at me in the car to get closer to a pokemon that needed to be caught.

For those who have been living in a cave, Pokemon Go is a brilliant app that requires players to collect "poke balls" in order to catch as many pokemon monsters as possible.

It uses augmented reality. As the player looks around using the phone’s camera, he or she might find a pokemon sitting atop a mailbox or in a fast-food parking lot. It's become a worldwide sensation.

Parents seem to fall into two camps on this. One side is lamenting kids spending even more time on their phones, scoffing at the zombie-like way players walk around trying to "catch ’em all." But there’s another group of parents who have unsuccessfully urged their kids to get off the couch and go do something active since summer started.

This group is doing cartwheels, just grateful their children have finally ventured outside. Players of all ages are walking their cities, discovering streets and parks they’ve never seen before. Some are even picking up garbage and walking shelter dogs while playing the game.

It’s easy for us to judge other parents whose kids seem to always be on their phones. We just take our kids' phones away; we make our children do active things, we say. But the fact is, it's a huge struggle for many parents to get their kids off-line and into the real world. And sometimes it’s a fight parents simply cannot face again for one more day.

There must be a way to incorporate screens in our efforts to get kids off the couch. Pokemon Go has proved it is possible. But finding an active app-fueled life after Pokemon Go might prove difficult. Let me help.

Jump Jump Froggy (free — iOS) is a simple game for a phone or iPad. Players have to jump in real life to make the frog leap on the screen to catch flies. Other mini-games within the app require players to do sit-ups to slither a snake or push-ups to build a tower of ants. Another jumping game moves a fly on the screen. Little ones can also compete against a friend, which makes it even more fun.

Ingress (free — iOS and Android) is created by the same people — Niantic — who brought you Pokemon Go. A mysterious energy has taken over the world and everyone must decide whether they are on the team that wants to use the energy, or on the team fighting against the energy. Players use augmented reality to find real-world artifacts all around them, capture territories and complete the quest.

For those needing a boost in their exercise routine

Zombies, Run! (free — iOS and Android) gives a frightening incentive to keep running once you get out the door. This app uses a zombie chase to make players move those Nikes a little faster. Players have to run from zombies while completing missions, collecting supplies and trying to ignore the hideous sounds of the undead. More than 1 million people are already playing this game, and it even works on a treadmill.

For the whole family

Geocaching (free — iOS and Android) is old school and the world’s largest treasure hunt. Players pick the geocache they want to find from the map’s app, then use their phones to find it. Geocaches come in all different shapes and sizes, and you never know what will be inside: It could be a cool handmade item, or someone’s old sock. Players find it, sign the log book, trade it out for something they brought, then put it back where it was. There are 2 million geocaches to find across the globe.

PokRadar (free — iOS, coming soon to Android) is a companion app for Pokemon Go. It lets players use filters to show exactly where an elusive pokémon is hanging out. This is a crowdsourced app, so there’s room for error. But when players click on an icon, the app shows whether other trainers found it to be a useful tip.