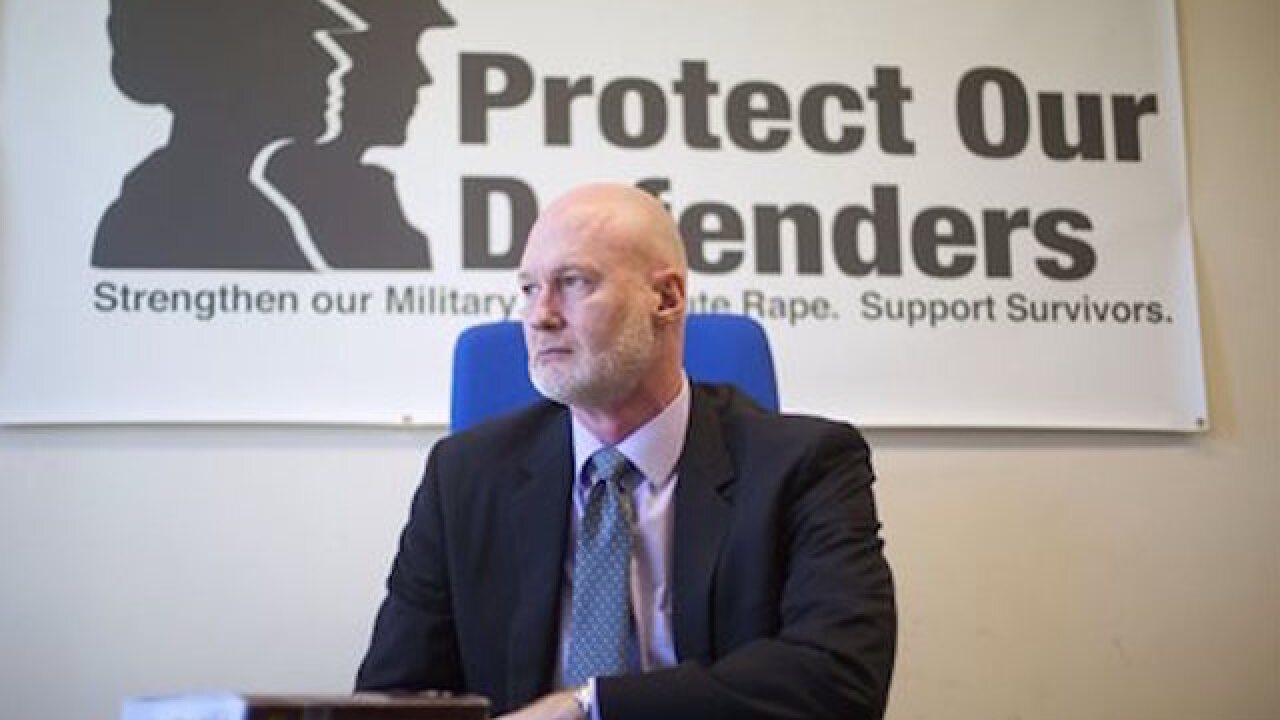 WASHINGTON (AP) — The Pentagon misled Congress by providing inaccurate or vague information about sexual assault cases in an effort to blunt support for a Senate bill that would make a major change in how the military handles allegations of sexual misconduct, an Associated Press investigation found.

At issue is whether local district attorneys and police forces failed to act on allegations of misconduct against U.S. service members. According to the Pentagon, there were some 90 cases that military commanders insisted on taking after civilian authorities said no.

The results buttressed the Pentagon's position that curbing the authority of commanders to decide which crimes go to trial — as the Senate bill proposes — will mean fewer victims will get justice because there will be fewer prosecutions.

But in a number of the cases, the steps taken by civilian authorities were described incorrectly or omitted, according to AP research and interviews. There also is nothing in the records that supports the primary reason the Pentagon told Congress about the cases in the first place: To cast top military brass as hard-nosed crime fighters who insisted on taking the cases to trial after civilian law enforcement said no.

The records were obtained through the Freedom of Information Act by the advocacy group Protect Our Defenders, which provided the documents exclusively to AP. The nonprofit group on Monday said it found no evidence that any case was prosecuted at a commander's insistence.

Former Navy pilot Lt. Paula Coughlin, a member of Protect Our Defenders board of directors, called on Congress to hold hearings on what she called "this latest deception."

Military representatives defended the accuracy of the information sent to Congress.

The bulk of the cases involved soldiers. Army spokeswoman Tatjana Christian said the case descriptions were written by service attorneys who had "personal and direct knowledge of the circumstances." She said they contacted the local authorities in each case to ensure the description was accurate, although there is no indication of that in the summaries. The Army declined to make a service official available for an interview.

Previously, the more than 90 cases had been discussed publicly only as statistics that underpinned the Pentagon's objections to the Senate bill, the Military Justice Improvement Act.

Three years ago, Navy Adm. James Winnefeld, then the vice chairman of the Joint Chiefs of Staff, warned a Senate panel that if approved, the bill would result in fewer sexual assault cases going to trial. Winnefeld retired from military service last year.

In response to the AP's reporting, Joint Chiefs of Staff spokesman Richard Osial described the information that Winnefeld provided the committee as a snapshot based on data that was supplied by the military services. "He had confidence to go with it," Osial said.

The consequences could be significant if lawmakers believe they were misinformed. A backlash may stoke additional support for the Senate bill that's failed to pass largely because of the military's strident opposition. Another vote on the legislation could come as early as June.

The legislation aims to stop sexual assaults by stripping senior officers of their responsibilities to decide whether to prosecute sexual assault cases and giving that authority to seasoned military trial lawyers. Protect Our Defenders, a nonpartisan organization, supports the bill.

"Someone at the Pentagon should be held accountable," said retired Col. Don Christensen, the organization's president and the former chief Air Force prosecutor. "Whether you agree or disagree with the policy, every senator — especially those who repeated the claim or based their vote on the claim — should be outraged."

The often unflattering image of civilian law enforcement projected in the records also runs counter to the close working relationships local prosecutors told AP that they've forged with the uniformed legal staffs at military installations in their jurisdictions — far from the contentious political climate in Washington.

Civilian prosecutors said it's not unusual to transfer a sexual assault case to the military for investigation or prosecution, particularly when the incident occurred off post and involved two or more service members. Yet these referrals are routinely depicted as refusals, leaving the impression the charges would not have been pursued had military authorities not stepped in.

"It's offensive that they would say they would prosecute cases that we would not," said Jaime Esparza, the district attorney for El Paso County, Texas, where the Army's 1.1 million-acre Fort Bliss is located.

At Fort Drum in upstate New York, the Army took credit for prosecuting a soldier who had been previously convicted for the possession of child pornography but was never discharged from the service. The soldier, whose identity AP could not confirm, also failed to register as a sex offender. After being allowed to stay in uniform, he groped a girl and also sent her sexually explicit messages. He then was court-martialed and sentenced to five years in prison.

Kristyna Mills, the district attorney in New York's Jefferson County, where Fort Drum is located, disputed the Army's conclusion that her office turned the case down. She said the decision to allow the Army to take it was a "collaborative effort" made with the legal staff at Fort Drum.

"It is extremely rare that my office 'declines to prosecute' a case unless there are serious evidentiary issues that we feel cannot be overcome," Mills said.

In another case, the sheriff's office in Macomb County, Michigan, launched an investigation of Marine Corps Staff Sgt. D.C. Hagler, who was suspected of child pornography and indecent exposure, according to the records. But Hagler was stationed in Iraq. So the sheriff asked the Naval Criminal Investigative Service to take over what had become an international probe. Yet this is among the cases cited by Winnefeld as an instance where the military had to step in after civilian authorities wouldn't act.

Marine Corps spokesman Maj. Clark Carpenter said the service is "not in a position to characterize" Winnefeld's testimony. Carpenter said the individuals who prepared the summaries "had personal and direct knowledge of the circumstances" and that the Marine Corps does not provide information to Congress unless it's first been "reviewed by a higher authority."

The Senate legislation, which is sponsored by Sen. Kirsten Gillibrand, D-N.Y., was first introduced in the spring of 2013 and has won the backing of at least 50 senators. But the legislation has twice failed on the Senate floor to meet a 60-vote filibuster threshold.

The dispute over Gillibrand's bill centers on the power that senior officers known as convening authorities have to send charges to trial and select jury members. Gillibrand and a bipartisan group of lawmakers argue that the system is archaic and ripe for bias, particularly for sex crimes. Victims may be reluctant to step forward, fearing they won't be believed or that they'll be retaliated against if they file a complaint.

But the bill's detractors have said fewer sex offenders will be caught and convicted if Gillibrand's bill ever becomes law. And that's where the sexual assault cases factored into the debate.

Winnefeld told the Senate Armed Services Committee in July 2013 that there were 93 sexual assault cases that military commanders insisted on taking after civilian authorities said no. Of the cases that had gone to trial at the time, more than half ended with a conviction, he said.

"I worry that if we turn this over to somebody else, whether it is a civilian DA or a nonentity in the military, that they are going to make the same kind of decisions that those civilian prosecutors made," said Winnefeld, who was the nation's second highest ranking military officer at the time. "I worry that we are going to have fewer prosecutions if we take it outside the chain of command."

Opponents of Gillibrand's bill seized on Winnefeld's remarks. Sen. Claire McCaskill, D-Mo., has cited the cases several times since the admiral testified, saying each one represents a victim who would never have had their day in court if Congress curbed the authority of commanders.

"The importance of these cases is that they show definitively that commanders don't sweep sexual assault cases under the carpet," said Sarah Feldman, McCaskill's spokeswoman. "On the contrary, the numbers continue to prove that commanders aggressively pursue courts-martial."

But there's no indication in the records of any direct intervention by commanders in the 93 cases or others listed in the documents. Each appears to have followed the steps mandated by the military's legal code: Senior officers cannot refer cases to a general court-martial unless uniformed attorneys known as staff judge advocates have first advised them that the evidence warrants the charges. So the argument that excluding commanders from the decision to prosecute will mean less justice for victims is a flawed one, according to proponents of Gillibrand's bill.

"Charges should not be sent to trial to set an example or show a commander is tough," said Christensen, the president of Protect Our Defenders.

Not all the case descriptions had enough information to independently verify if they were correct. The Army convicted Sgt. Cecil Saddler of raping a 10-year autistic girl in a case Winnefeld singled out as heinous. Saddler, who was stationed at Joint Base Langley-Eustis in Virginia, was sentenced to 35 years in prison in August 2011.

AP contacted the offices of four commonwealth's attorneys near Fort Eustis, where the crime occurred, and none of them had any record of Saddler's case.

Other descriptions omitted key details about the level of involvement by local authorities. A case from San Diego County, California, illustrates that point. The summary said the office of the district attorney in San Diego refused to move forward with sexual assault charges against a soldier because of insufficient evidence. But county court records and interviews provide a much different account.

Army Sgt. Paul Henson was convicted at Fort Knox, Kentucky, in February 2013 of sexually assaulting a teenage girl in Carlsbad, California. He was sentenced to two years confinement and was released after serving 18 months.

The assault occurred in July 2010, but the Carlsbad Police Department didn't learn of the incident until nearly nine months later when it received a report from a police department in another state. By then, Henson was long gone from California. But the Carlsbad police investigated the allegations and the San Diego County District Attorney's office issued an arrest warrant for unlawful sexual intercourse with a minor.

After Henson was found guilty in military court, the district attorney's office consulted with the victim and her family and elected not to proceed. She had testified at the Army trial in Kentucky and they were concerned about putting her through another one. But the sexual assault charge against Henson in California wasn't dropped until May 2015.

The imprecision in an Army case description resulted in a serious but untrue accusation against the office of the prosecuting attorney in Pierce County, Washington, where Joint Base Lewis-McChord is located. The summary said the office declined to prosecute a soldier accused of rape and then destroyed forensic evidence that had been collected the day after the assault.

John Sheeran, the office's assistant chief criminal deputy, said Pierce County elected not to prosecute because of concerns the charges couldn't be proved beyond a reasonable doubt. But he said his office did not destroy evidence. That was done by the local police department — which held the evidence — after it was informed no charges were being filed.

That's a distinction with a difference and one that should have been recognized by the Army attorneys who wrote the summary.

"If the implication is that prosecutors are reckless with evidence, it is problematic," Sheeran said. The Army also did not inform local law enforcement that it needed evidence preserved for a possible prosecution, he said.

"Let's not kid ourselves," Sheeran said. "Anybody can cherry pick cases."