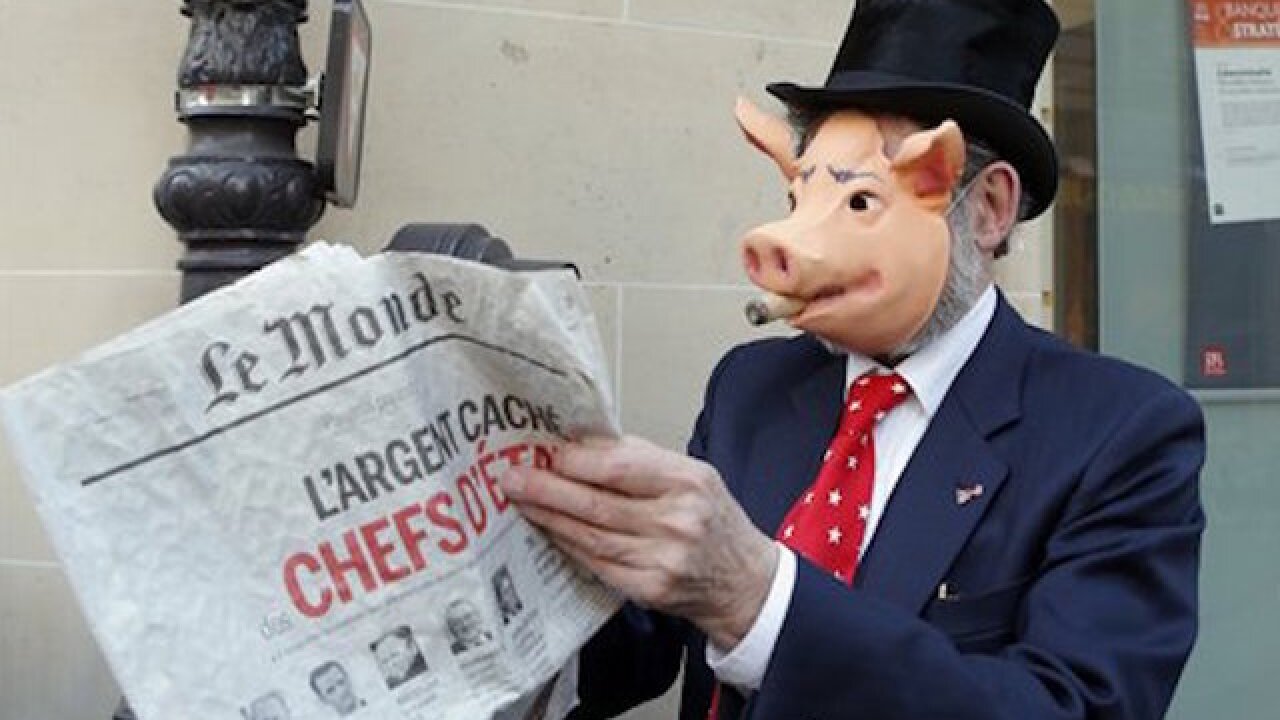 Copyright Associated Press
Francois Mori
<p>An activist displays a newspaper headlining on the 'Panama Papers' revelations during a banking managers meeting, in Paris, France, Thursday, April 14, 2016. The Panama disclosures have shaken the rich and powerful by exposing how they use networks of shell companies to dodge financial obligations, taking tax evasion to the top of international agenda. (AP Photo/Francois Mori)</p>

FRANKFURT, Germany (AP) — A group of investigative journalists are set to publish the names of thousands of offshore companies based on a massive trove of data on the finances of the rich and powerful that has become known as the Panama Papers.

The International Consortium of Investigative Journalists is making data on 200,000 entities available on Monday at 2 p.m. ET on its website.

They contain basic corporate information about companies, trusts and foundations set up in 21 jurisdictions including Hong Kong and the U.S. state of Nevada. The data was obtained from Panamanian law firm Mossack Foneca, which said it was hacked.

Users can search the data and see the networks involving the offshore companies, including, where available, Mossack Fonseca's internal records of the true owners.

It won't be the full cache of data commonly known as the Panama Papers, since the database will exclude information and documents on bank accounts, phone numbers and emails.

The ICIJ said it was putting the information online "in the public interest" as "a careful release of basic corporate information" as it builds on an earlier database of offshore entities.

Setting up an offshore company is not by itself illegal or evidence of illegal conduct, and Mossack Fonseca said it observed rules requiring it to identify its clients.

But anti-poverty campaigners say shell companies can be used by the wealthy and powerful to shield money from taxation, or to launder the gains from bribery, embezzlement and other forms of corruption. The Group of 20 most powerful economies has agreed that individual governments should make sure authorities can tell who really owns companies, but implementation in national law has lagged.

The data cache, first leaked to Germany's Sueddeutsche Zeitung daily, showed offshore holdings of 12 current and former world leaders. Reports based on the documents quickly led to the resignation of Iceland's Prime Minister David Gunnlaugson after it was revealed he and his wife had set up a company in the British Virgin Islands that had holdings in Iceland's failed banks. British Prime Minister David Cameron, who had campaigned for financial transparency, faced questions about shares he once held in an offshore trust set up by his father. The ICIJ reported that associates of Russian President Vladimir Putin moved some $2 billion through such companies. Putin's spokesman dismissed the report.

Hundreds of economists urged world leaders Monday to end the era of tax havens, arguing they only benefit rich individuals and multinational corporations and serve to increase inequality.

The 300 economists, in a letter coordinated by activist group Oxfam, say poorer countries are hit hardest by tax dodging.

"As the Panama Papers and other recent exposés have revealed, the secrecy provided by tax havens fuels corruption and undermines countries' ability to collect their fair share of taxes," the letter said. "While all countries are hit by tax dodging, poor countries are proportionately the biggest losers, missing out on at least $170 (billion) of taxes annually as a result."

The letter comes days before an anti-corruption summit in London, featuring politicians from 40 countries as well as representatives from the World Bank and the International Monetary Fund. Many of the companies that featured in the Panama Papers were incorporated in British Overseas Territories and the British Virgin Islands.