Officers nationwide being targeted in wake of officer-involved shootings 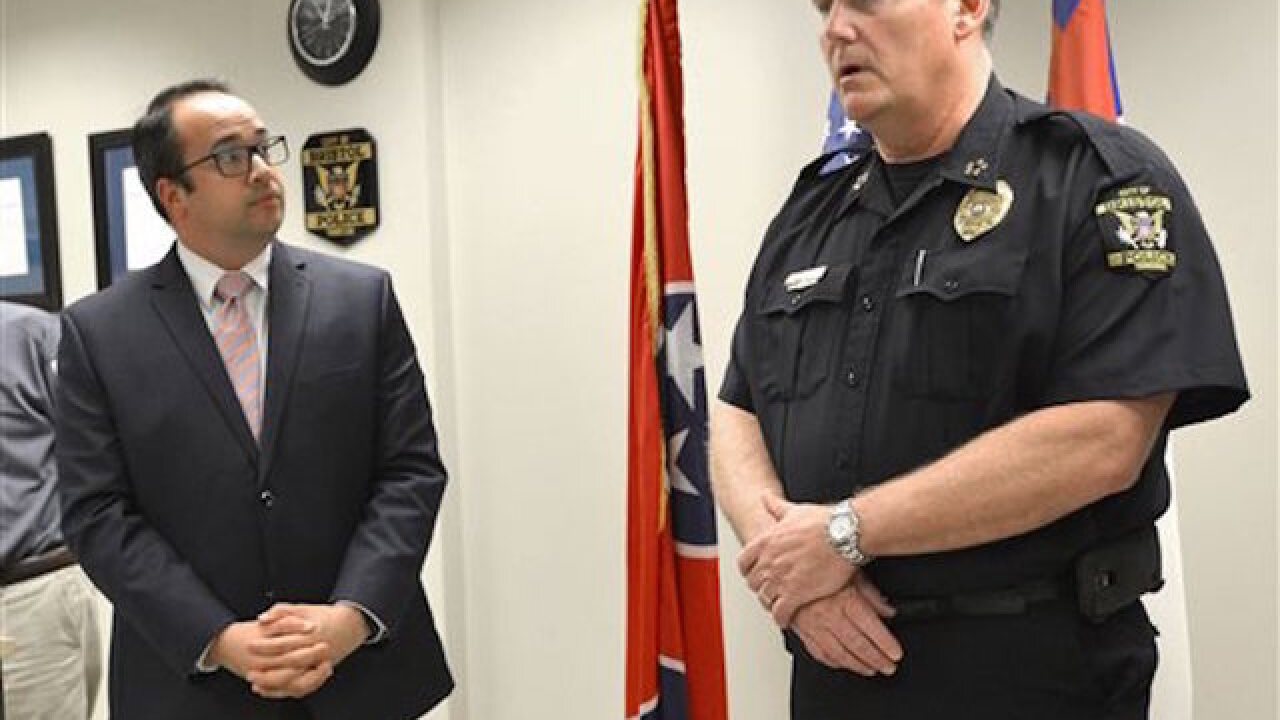 Copyright Associated Press
Earl Neikirk/BHC
<p>Josh Devine with the Tennessee Bureau of Investigation, left, looks on as Bristol Tennessee Chief of Police Blaine Wade gives an update of an early morning shooting in Bristol, Tenn., on Thursday, July 7, 2016. Police say multiple people have been injured and one person was taken into custody after a man opened fire on motorists traveling along a parkway in East Tennessee. Bristol police say the incident happend early Thursday in the city along the Virginia border. (David Crigger/The Bristol Herald-Courier via AP)</p>

BRISTOL, Tenn. (AP) — A man accused of shooting indiscriminately at passing cars and police on a Tennessee highway told investigators he was angry about police violence against African-Americans, authorities said Friday.

One woman died and three others, including one police officer, were injured in the rampage early Thursday morning rampage. Meanwhile, police say officers have also been targeted in Georgia and Missouri in the aftermath of two high-profile killings of black men by law enforcement and the Dallas attack that left five officers dead and seven more wounded.

The Tennessee Bureau of Investigation said in a news release that initial conversations with the suspect, 37-year-old Lakeem Keon Scott, revealed he was troubled by several incidents across the U.S.

Scott, who is black, was wounded in the shootout with police, remains hospitalized and has not yet been charged. All those shot were white, police confirmed.

The Tennessee Bureau of Investigation alleges Scott — armed with an assault rifle, a pistol and a large amount of ammunition — fired shots through the window of the Days Inn on Volunteer Parkway.

The front desk clerk, Deborah Watts, was struck and injured. Days Inn owner Kiran Patel said he awoke to the sound of gunfire. His wife called the front desk to see what happened, Watts answered and said she'd been shot. She remains in the hospital in serious but stable condition.

The gunman then turned his fire to cars passing on the highway, investigators say.

Newspaper carrier Jennifer Rooney, a 44-year-old mother of two, was on her way to pick up papers for the morning delivery when a bullet struck her. The Bristol Herald-Courier reported that her car careened over a median and crashed through a chain link fence.

David Whitman Davis was also injured by flying glass from the gunfire, the TBI said.

Three officers with the Bristol Tennessee Police Department arrived and confronted Scott, who fired on them.

Office Matthew Cousins was hit in the leg. He was treated for superficial injuries and released.

Scott was stuck by the officers returning fire. He remains in the hospital in serious but stable condition.

The Tennessee Bureau of Investigation said the investigation is ongoing as they work to understand the shooter's motive.

The shooting spree in Tennessee began around 2:20 a.m. Thursday on the heels of the fatal shootings of black men in Minnesota and Louisiana. Later Thursday night, 12 officers were shot in Dallas during a Black Lives Matter protest by a man who police say declared he was angry about police shootings of black men and wanted to exterminate whites. Five of the officers died.

The shootings are part of a spate of attacks on officers across the U.S. In south Georgia, police said one officer was ambushed Friday when he came to an apartment complex to investigate a report of a break-in. Another officer was fired upon by a motorist north of Atlanta. And just outside St. Louis, police say an officer was ambushed during a traffic stop.