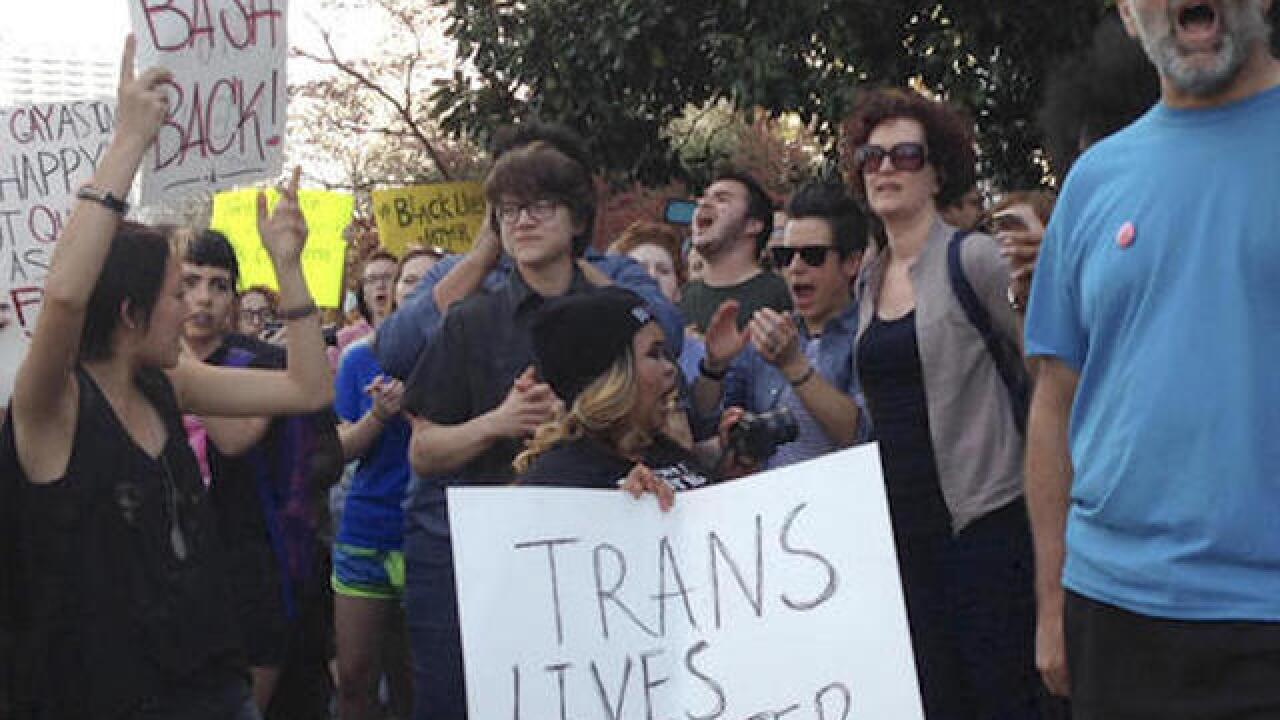 RALEIGH, N.C. (AP) — North Carolina Gov. Pat McCrory's administration sued the federal government Monday in a fight for a state law that requires transgender people to use the public restroom matching the sex on their birth certificate.

The lawsuit seeks to keep in place the law, which the U.S. Justice Department said last week violated the civil rights of transgender people against sex discrimination on the job and in education. U.S. Attorney General Loretta Lynch was scheduled to describe the launch of "law enforcement action" against North Carolina later Monday.

"I do not agree with their interpretation of federal law. That is why this morning I have asked a federal court to clarify what the law actually is," McCrory said at a news conference. He said he hopes other states will join North Carolina in court as it fights the Justice Department's position that the Civil Rights Act requires that transgender people be allowed to access facilities matching their gender identities.

"This is not a North Carolina issue. It is now a national issue," McCrory said.

The Justice Department had set a Monday deadline for McCrory to report whether he would refuse to enforce the law that took effect in March. McCrory's defiance could risk funding for the state's university system and lead to a protracted legal battle. The law also limits state anti-discrimination protections for lesbian, gay, bisexual and transgender people and blocks local governments from establishing their own.

The law, called House Bill 2, has been criticized by gay rights groups, and entertainers including Bruce Springsteen and Pearl Jam have canceled shows. PayPal reversed plans to open a 400-employee operation center in Charlotte, and Deutsche Bank froze expansion plans near Raleigh. Nearly 200 corporate leaders from across the country, including Charlotte-based Bank of America, have urged the law's repeal, arguing it's bad for business because it makes recruiting talented employees more difficult.

Several other states have proposed similar laws in recent months limiting protections to lesbian, gay, bisexual and transgender people. On Monday, the American Civil Liberties Union of Mississippi sued that state over a law that will allow workers to cite their own religious objections to same-sex marriage to deny services to people.

Federal civil rights enforcement attorneys focused in their warning letters to North Carolina particularly on the bathroom provision. The letters threatening possible federal lawsuits were sent to McCrory, leaders of the 17-campus University of North Carolina system, and the state's public safety agency.

McCrory's lawsuit, filed in federal court in North Carolina, asks a judge to block Justice Department action that could threaten billions of dollars in federal money flowing to the state.

The lawsuit called the law a "common sense privacy policy" and said the Justice Department's position was a "baseless and blatant overreach."

"This is an attempt to unilaterally rewrite long-established federal civil rights laws in a manner that is wholly inconsistent with the intent of Congress and disregards decades of statutory interpretation by the courts," the lawsuit said.

McCrory said on "Fox News Sunday" he was not aware of any North Carolina cases of transgender people using their gender identity to access a restroom and molest someone. Other supporters of the law cite reports elsewhere of men entering women's bathrooms — thanks to policies allowing transgender people to enter the restrooms aligned with their gender identity — to highlight the threat of sexual assault.

The state's public university system was expected to issue a separate response Monday to the Justice Department warning letter it received. The university's governing board scheduled a special meeting for Tuesday to receive a private "legal briefing" from its top staff attorney.

The UNC system risks losing more than $1.4 billion in federal funds if its observance of the law is found to violate federal sex discrimination protections in education and employment. Another $800 million in federally backed loans for students who attend the public universities also would be at risk.