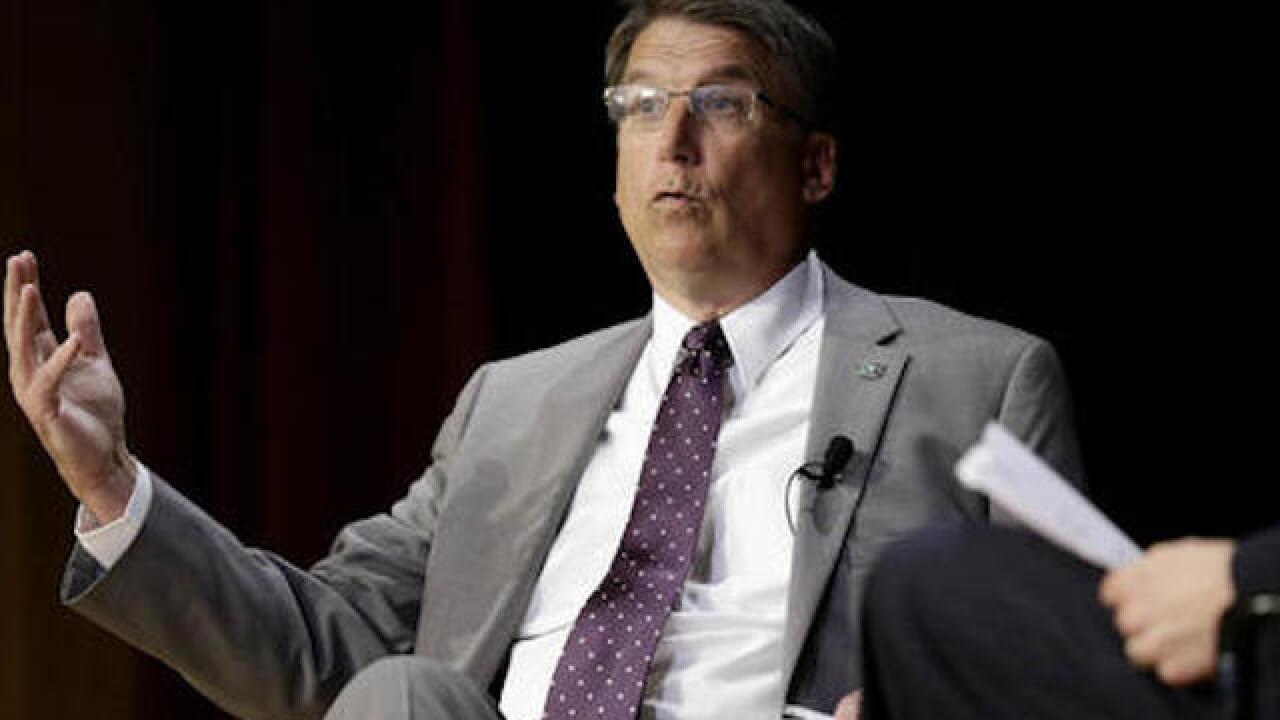 RALEIGH, N.C. (AP) — North Carolina Gov. Pat McCrory shows no signs of backing down in the face of the federal government's Monday deadline to declare he won't enforce the new state law limiting protections for LGBT people — defiance that could risk funding for the state's university system and lead to a protracted legal battle.

McCrory and other state officials have been under pressure since the U.S. Justice Department warned last week that the law passed in March violates civil rights protections against sex discrimination on the job and in education for lesbian, gay, bisexual and transgender people.

In letters, federal civil rights enforcement attorneys focused particularly on provisions requiring transgender people to use public restrooms that correspond to their biological sex. A federal lawsuit against the state is possible, the Justice Department said.

"It's the federal government being a bully. It's making law," McCrory said on "Fox News Sunday." The Justice Department is "trying to define gender identity, and there is no clear identification or definition of gender identity." Still, McCrory wouldn't disclose how the state would respond in writing.

"I'm looking at all my options," he said.

McCrory has called the law a common-sense measure. He said it's designed to protect the privacy of people who use bathrooms and locker rooms and to expect all people inside the facilities to be of the same gender. McCrory said Sunday he was not aware of any North Carolina cases of transgender people using their gender identity to access a restroom and molest someone. Other supporters of the law cite reports elsewhere of men entering women's bathrooms — thanks to policies allowing transgender people to enter the restrooms aligned with their gender identity — to highlight the threat of sexual assault.

While McCrory agreed that the Justice Department could warn of consequences if North Carolina established separate bathrooms for white and black people, the governor said the agency goes too far in contending that transgender people enjoy similar civil rights protections.

"We can definitely define the race of people. It's very hard to define transgender or gender identity," McCrory said. He added that he had made a request for more time to respond to the Justice Department but that was denied.

The governor has become the public face of the law called House Bill 2, which has been the subject of fierce criticism by gay rights groups, corporate executives and entertainers demanding that the law be repealed. North Carolina has already paid a price for the law, with some business scaling back investments in the state and associations cancelling conventions.

The 17-campus UNC system risks losing more than $1.4 billion in federal funds if they don't comply. Another $800 million in federally backed loans for students who attend the public universities also would be at risk if it's found that enforcing the law violates Title IX of the Civil Rights Act, which bars discrimination based on sex. The letter to McCrory said the law also violates Title VII, which bars employment discrimination.

Repealing the law also would satisfy the attorneys, but GOP lawmakers who run the General Assembly had no plans before to do so Monday.

Senate leader Phil Berger of Eden said last week that he's frustrated because "we have a federal administration that is so determined to push a radical social agenda that they would threaten" federal funding. "I just think the people should be frustrated and people should be angry."

UNC President Margaret Spellings has said that while the university system is obligated to follow the law, it did not endorse the law. Spellings said later she hoped legislators would change the law, which could discourage promising faculty and students from coming to system campuses. McCrory said the system's governing board wouldn't get together until Tuesday to discuss the issue.

Civil liberties groups and several individuals already have sued to challenge the law, which also prevents local governments from passing rules giving protections to LGBT people while using public accommodations such as restaurants and stores. The state law was designed to block an ordinance by the city council in Charlotte.