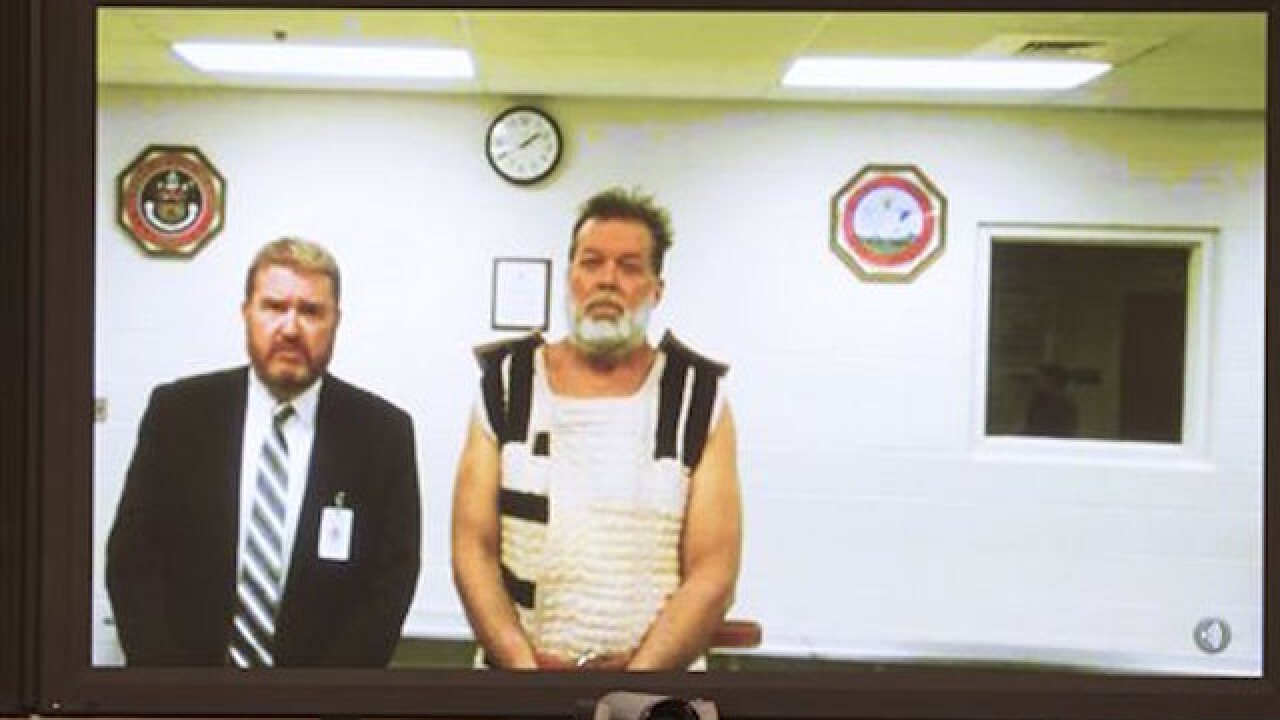 COLORADO SPRINGS, Colo. (AP) — The man accused of a deadly shooting rampage at a Planned Parenthood clinic in Colorado Springs was told Monday that he will be charged with first-degree murder in the killing of three people, including a police officer, during the standoff at the facility.

Speaking in a raspy voice, white-bearded suspect Robert Lewis Dear appeared via a video hookup from El Paso County Jail, where he has been held since surrendering to police after the five-hour siege on Friday.

Dear wore a padded, white vest with black straps and gazed downward during most of the hearing. It was his first appearance in court in the case.

Dear responded "no questions" when asked by Chief District Judge Gilbert Martinez if he had any questions about his rights.

Public Defender Daniel King, who represented Colorado theater shooter James Holmes, stood beside Dear and will act as his counsel. Dear is expected to be formally charged on Dec. 9.

Victims' relatives sat in the courtroom during the hearing.

Dear, 57, is accused of fatally shooting a university police officer who tried to stop the attack, an Iraq war veteran and a mother of two inside the clinic.

The rampage sent nine other people to a hospital.

Colorado Springs police have declined to disclose any information on a motive for the attack, and a judge ordered the sealing of investigatory court documents at the request of prosecutors.

The official said the comment was among a number of statements Dear made to authorities after his arrest, making it difficult to know his specific motivation.

The law enforcement official spoke on condition of anonymity because the official was not allowed to publicly discuss the ongoing investigation.

U.S. Attorney John Walsh said investigators have been in touch with lawyers from the Justice Department's Civil Rights and National Security divisions, a move that suggests officials could pursue federal charges in addition to state homicide ones. Walsh did not elaborate.

One possible avenue could be the 1994 Freedom of Access to Clinic Entrances Act, which makes it a crime to injure or intimidate clinic patients and employees.

"The case may fit the criteria for a federal domestic terrorism case, but based on my experience, I would be very surprised if this is not simply a local prosecution," said Colorado Springs Mayor John Suthers, a former U.S. attorney and state attorney general.

Planned Parenthood said witnesses believe the gunman was motivated by his opposition to abortion.

Suthers, however, said it's unclear whether the shooting was intended to send an ideological message.

Whatever authorities decide is sure to be controversial, given the political murkiness of Dear's statements and the debate over Planned Parenthood, which was reignited in July when anti-abortion activists released undercover video they said showed the group's personnel negotiating the sale of fetal organs.

The organization has denied seeking any payments beyond legally permitted reimbursement of the costs for donating the organs to researchers.

Dear has been described by acquaintances as a reclusive loner who didn't seem to have strong political or social opinions.

Neighbors who live near Dear's former South Carolina home say he hid food in the woods and lived by selling prints of his uncle's paintings of Southern plantations and the Masters golf tournament.

After he moved to Colorado, he once gave a neighbor pamphlets opposing President Barack Obama.

"He didn't talk about them or anything. He just said, 'Look them over when you get a chance,'" Zigmond Post said.