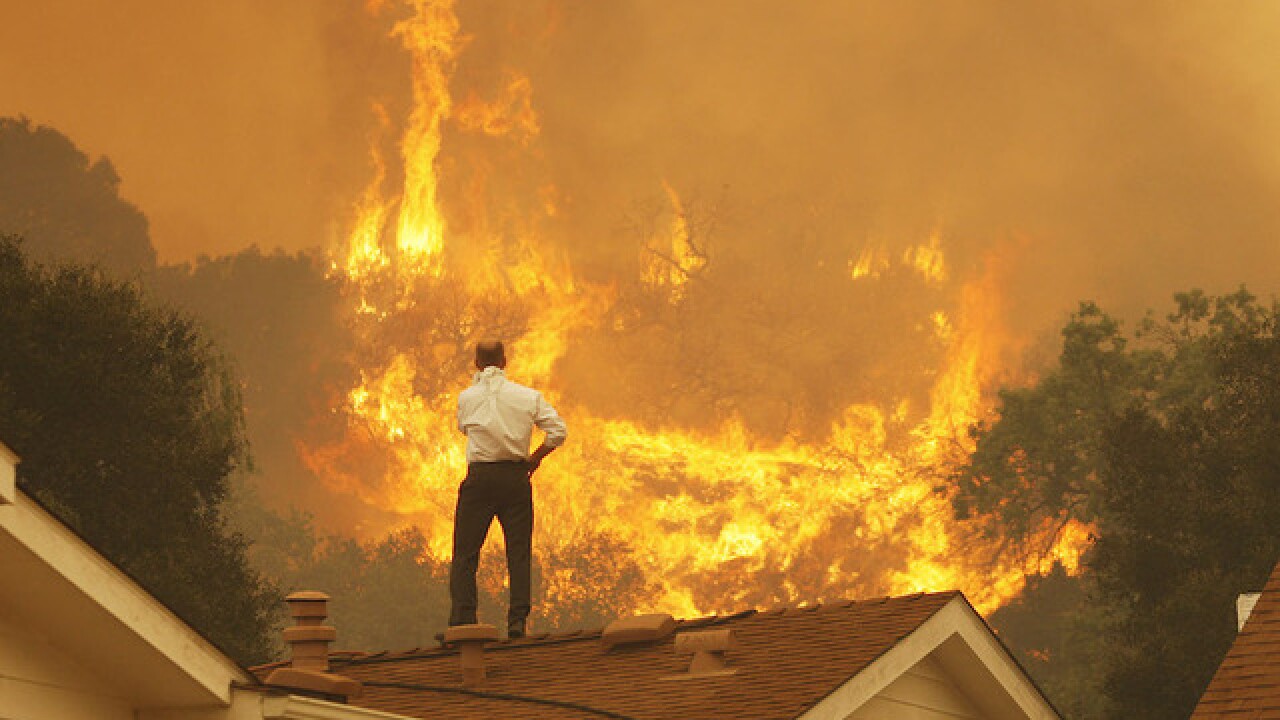 Copyright Getty Images
David McNew
<p> A man on a rooftop looks at approaching flames as the Springs fire continues to grow on May 3, 2013 near Camarillo, California. The wildfire has spread to more than 18,000 acres on day two and is 20 percent contained. (Photo by David McNew/Getty Images)</p>

Southern California is being hit by a major wildfire that has forced more than 80,000 people to evacuate.

Wildfires have become an annual concern for California as the state continues to be in the midst of a major multi-year drought .

California is not the only place that has been hit by major fires. Places from coast-to-coast in the United States have been susceptible to massive fires.

Here are some of the largest recorded fires in U.S. history.

Many people are familiar with the Great Chicago Fire, which devastated one of the nation’s largest cities.

But the Great Chicago Fire was not even the most deadly fire for that day. The Peshtigo started on October 8, 1871 and killed 1,200, according to history.com , though some other sites claim the death toll was much greater .

A rumor emerged that the Great Chicago Fire started because a cow kicked over a lantern in a barn, but the story has never been confirmed.

The fire began as a small grass fire in Berkeley Hills, California but would go on to consume 1,500 acres and consume 3,000 homes, apartments and condos, according to San Francisco-based KPIX .

Here is video of the coverage of the fire.

Hurricane-force winds hit the Northwest in mid-August and helped spread a massive fire that scorched 3 million acres in Idaho, Montana and Washington.

The fire led the U.S. Forest Service to start fighting all wildfires instead of only those deemed to be a threat to people or property.

The Miramichi fire started in New Brunswick, Canada, but quickly spread to portions of Maine.

The fire started on Oct. 7, 1825, according to the Maine Genealogical Society .

The fire burned about 3 million acres and killed about 300 people while destroying 600 buildings.

The people of the Miramichi area remembered the day for many years by not eating for a day and closed all shops, according to the Maine Genealogical Society.

No one died in the fire, but the fire marked the largest in the history of Yellowstone National Park.

The fire was hot enough to sustain its own wind system, according to yellowstonepark.com .

The fire burned more than 30 percent of the total acreage of the park and more than 1.2 million acres in total. More than 25,000 firefighters came to the scene, according to the Yellowstone National Park web site.

A hunter got lost in the woods and set a fire to keep warm, according to wildfiretoday.com . But the fire grew out of control on Oct. 25, 2003.

The fire burned more than 273,000 acres in San Diego County and destroyed more than 2,000 homes in the region.

On August 18, 2004, Alaska set a record for acres burned by wildfires in the summer of 2004 with more than 5 million acres of burnt ground, according to firehouse.com .

The fire did limited damage to homes or buildings, but scorched a lot of acres.