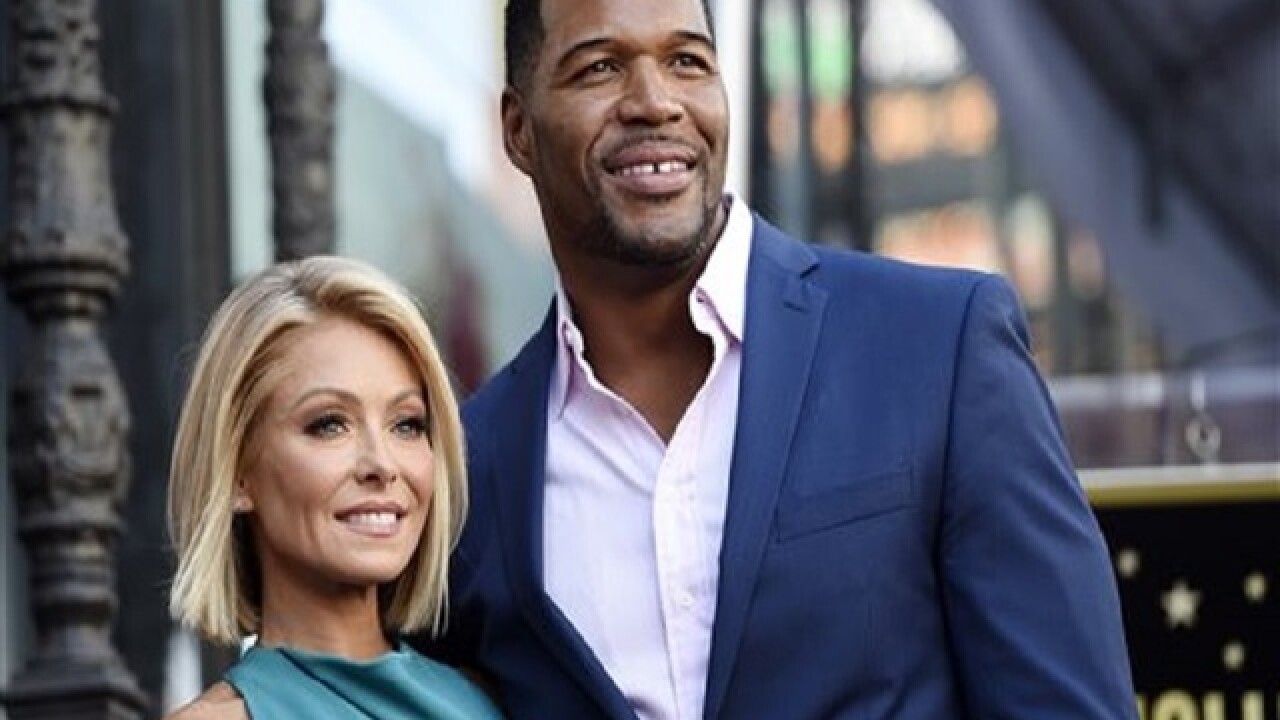 Chris Pizzello
<p>FILE - In this Oct. 12, 2015 file photo, Kelly Ripa, left, poses with Michael Strahan, her co-host on the daily television talk show "LIVE! with Kelly and Michael," during a ceremony honoring Ripa with a star on the Hollywood Walk of Fame in Los Angeles. Ripa was absent from her daytime talk show Wednesday, April 20, 2016, the day after it was announced that Strahan was leaving the show to join "Good Morning America" full-time. The show's spokeswoman, Barbara Warren, said that Ripa had a day off. (Photo by Chris Pizzello/Invision/AP, File)</p>

LOS ANGELES (AP) — The team of Kelly Ripa and Michael Strahan is going out on top with Emmy gold.
The "Live with Kelly and Michael" duo won the Daytime Emmy Award for best entertainment talk show host on Sunday, capping a tumultuous two weeks that began with Strahan's announced departure for "Good Morning America" and Ripa's reaction.
Neither Ripa or Strahan showed up at the non-televised ceremony in Los Angeles to claim the award, their second consecutive one in the category for their syndicated show.
Ripa reportedly had been upset that she learned only a few minutes before the public that Strahan, a former football star and her co-host since 2012, was exiting for "GMA."
She subsequently took several days off from "Live" and, when she returned, said she'd needed to gather her thoughts and that "apologies have been made," although she didn't specify by who. Strahan is set to leave May 13.
CBS' "The Talk" won the award for best entertainment talk show, while ABC's "The Chew" received the informative talk show trophy. Syndicated series "Extra" picked up the best entertainment news program award.
ABC's "General Hospital" was the big winner at the 43rd Daytime Emmy ceremony with five trophies, including best drama series and awards for lead actor Tyler Christopher, supporting actor Sean Blakemore and younger actor in a drama Bryan Craig. A best directing team award also went to the series.
Sonia Manzano received a lifetime achievement honor in recognition of her portrayal of the character Maria on "Sesame Street."
CBS' "The Price is Right" was honored as best game show, while Craig Ferguson won as game show host for "Celebrity Name Game."
"CBS Sunday Morning" earned the best morning program award.
Mary Beth Evans of NBC's "Days of Our Lives" received the trophy for lead drama series actress, while co-star True O'Brien won as outstanding younger actress. Jessica Collins of CBS' "The Young and the Restless" was honored as best supporting actress in a drama.
The guest performer trophy went to Obba Babatunde for CBS' "The Bold and the Beautiful," which also received an Emmy for its writing team.
Dr. Mehmet Oz won the award for informative talk show host for "The Dr. Oz Show."
Gabriela Natale, host of "SuperLatina with Gaby Natale," was honored as best talent for a Spanish-language program and the show won best entertainment show in Spanish. "Cafe CNN" won the Emmy for best morning show in Spanish.
Associated Press 2016