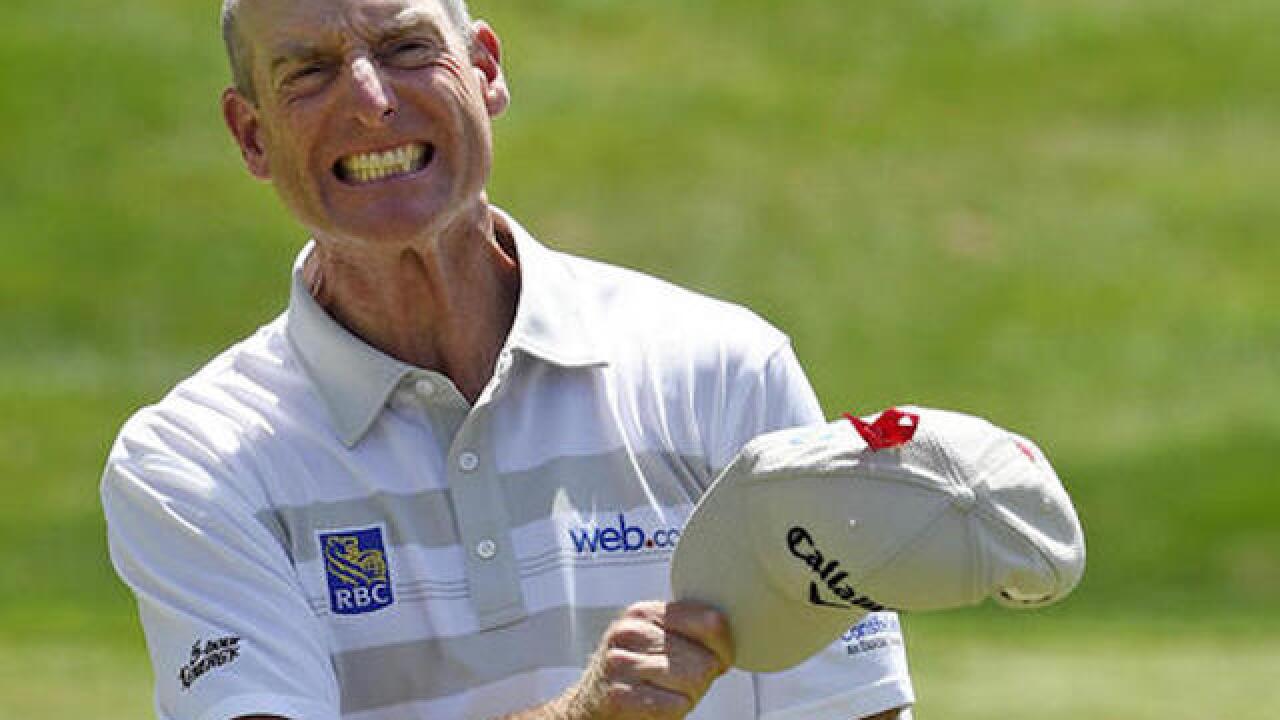 Fred Beckham
<p>Jim Furyk celebrates after shooting a course and PGA-record 58 during the final round of the Travelers Championship golf tournament in Cromwell, Conn., Sunday, Aug. 7, 2016. (AP Photo/Fred Beckham)</p>

CROMWELL, Conn. (AP) — Jim Furyk has a place in PGA Tour history all to himself with a new magic number in golf.

Three years after Furyk became the sixth player on tour with a 59, he took it even lower Sunday in the Travelers Championship with a 58.

The 46-year-old American holed out for eagle from 135 yards, ran off seven straight birdies around the turn and picked up his final birdie on the 16th hole with a putt from just inside 24 feet. He rolled in a short par putt on the final hole at TPC River Highlands, thrust his arms in the air and waved his cap to salute thousands of fans who had rushed to the amphitheater around the 18th green to catch a stunning slice of history.

"There's a lot of rounds by a lot of great players ahead of me that have never reached 58, so to hold that record alone right now, on the PGA Tour at least ... is phenomenal," Furyk said. "To have a little, small place in history is something you dream of."

And it could have been even lower.

Furyk reached 11 under on the par-70 course with his seventh straight birdie at No. 12. He missed a 12-foot birdie attempt on the 14th hole, and after nearly driving the par-4 15th, his 8-foot birdie putt lipped out.

It might be one of the best rounds hardly anyone saw.

Furyk, who started the final round 16 shots out of the lead, had less than a dozen fans watching when he teed off at 8:41 a.m. He finished his round before Golf Channel coverage began.

"Amazing, eh?" Justin Rose said from the practice range at the Olympic Golf Course in Rio de Janeiro. "Amazing that he did it without birdieing the 13th (par 5) and 15th. Pretty cool."

It might not have happened if Furyk had not gone this road before. He shot a 59 at Conway Farms in the second round of the 2013 BMW Championship with a bogey on his card.

"I guess had I never shot 59 before, I probably would have been thinking 59, the barrier," he said. "But the fact that I did it three years ago, you know, in the back of my mind I've got 11-under through 12; I've got six holes to play. If I play them under par, I'm going to break another barrier."

Ryo Ishikawa shot a 58 in The Crowns on the Japan Golf Tour in 2010. Shigeki Maruyama shot a 58 in U.S. Open sectional qualifying in 2000. And just last week, Stephan Jaeger posted a 58 on the Web.com Tour in the Ellie Mae Classic at the TPC Stonebrae.

Furyk is the only player with sub-60 rounds twice. And it would appear that both times, he had to settle for history, not a trophy. He finished third at the 2013 BMW Championship, and he was still four shots behind 54-hole leader Daniel Berger at the Travelers before Berger even teed off.

The most pressure Furyk felt Sunday was after his final birdie. He still had two par 4s to navigate.

He acknowledged guiding the ball with his drive on 17, where he had hit the water earlier in the week. His approach was 40 feet beyond the flag, but he two-putted for par by making a 4-footer.

His drive on 18 hit the right side of the fairway and his approach left him 29 feet to the right and below the hole. He says the attempt for birdie felt good, but it slid by on the right about 2 feet past the hole. That's when Furyk knew he had the record.

"It's nice when the second ones are mindless," he said.

Furyk was the most recent PGA Tour player with a 59 at Conway Farms.

The others were Al Geiberger at the 1977 Memphis Classic; Chip Beck at the 1991 Las Vegas Invitational; David Duval at the 1999 Bob Hope Chrysler Classic; Paul Goydos at the 2010 John Deere Classic and Stuart Appleby at the 2010 Greenbrier Classic.

Furyk, whose best finish at the Travelers was fourth place in 2000, finished at 11-under 269. He said he spent a lot of Saturday night talking to his father and sending him video of his swing, because he had been playing so poorly. He decided he might have been swing too hard after playing the PGA Championship last week at Baltusrol, a course that measured 7, 428 yards for a par 70.

He made an adjustment. It worked.

"No one else can say they've done that out here on the PGA Tour," he said. "It's really special."