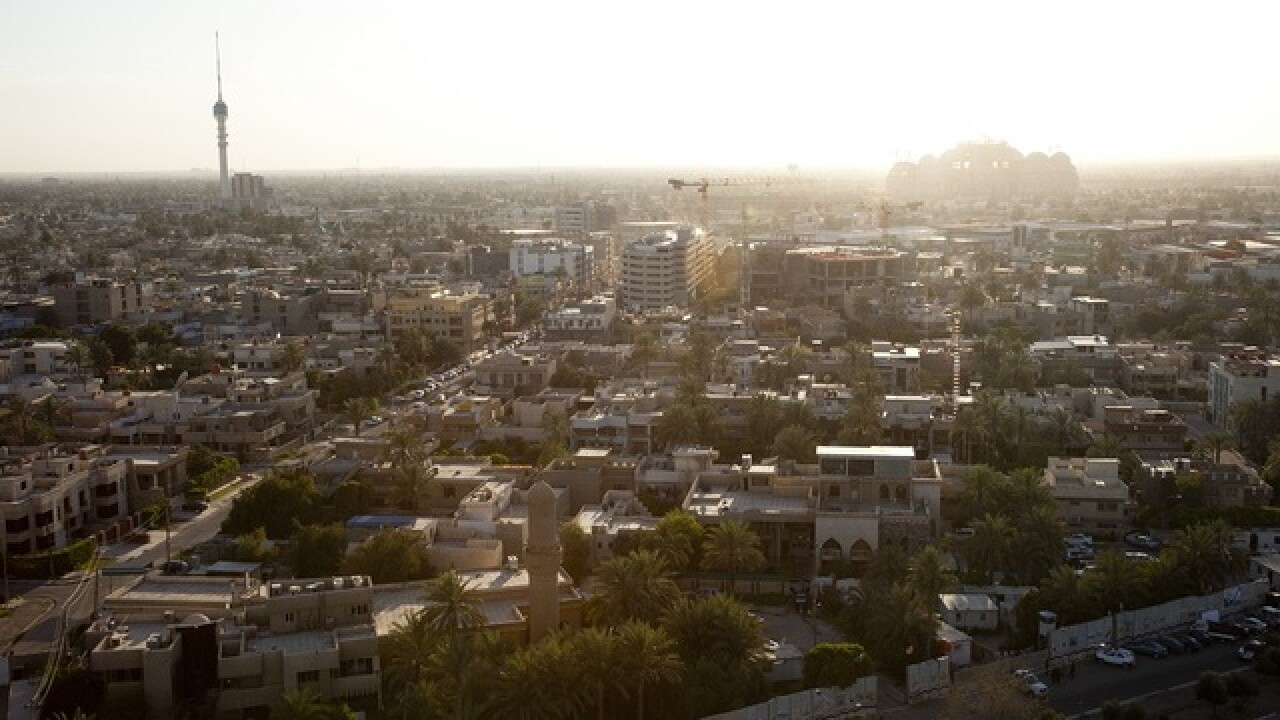 The Islamic State group later claimed responsibility for all three bombings. In recent months, the extremist faction has lost some of the Iraqi territory it conquered in a stunning 2014 blitz. But Wednesday's carnage demonstrates the group's lingering ability to launch significant attacks across the country and in the heart of the capital.

In the largest attack of the day, a car bomb ripped through a commercial area in the predominantly Shiite neighborhood of Sadr City Wednesday morning, killing at least 63 people and wounding at least 85.

Later in the afternoon, two more car bombs killed at least 30 and wounded 80, police officials said. One bomber targeted a police station in Baghdad's northwest Kadhimiyah neighborhood, killing 18, of whom five were policemen, and wounding 34. Another bombing In the northern Baghdad neighborhood of Jamiya killed 12 and wounded 46.

Medical officials confirmed the casualty figures. All officials spoke on condition of anonymity as they were not authorized to brief the press.

Officials claim the increase in assaults in Baghdad is an attempt by IS to distract from their battlefield losses.

The bombings also come at a time of political deadlock that has paralyzed the work of the Iraqi government and parliament, adding to the country's complex set of military, security, humanitarian, economic and human rights challenges.

The market struck in Sadr city is one of four main outdoor shopping venues in the sprawling slum that is home to about 2.5 million residents — almost half of Baghdad's population of around 6 million. The open-air markets sell a range of goods, from food to household items, to clothes and other merchandise.

Ambulances rushed to the scene as dozens of residents walked through twisted and mangled wreckage of cars and other debris that littered the pavement, trying to help the victims. The street was stained red with blood in many places and front-side facades of several buildings were heavily damaged. Smoke billowed from ground-level stores gutted by the explosion.

Karim Salih, a 45-year old grocer, said the bomb was in a pickup truck loaded with fruits and vegetables that was parked by a man who quickly disappeared among the crowds of people.

"It was such a thunderous explosion that jolted the ground," Salih told The Associated Press.

"The force of the explosion threw me for meters away and I lost consciousness for a few minutes," the merchant added. He suffered no injuries, but two of his workers were wounded.

IS, which views Shiite Muslims as apostates, said the attack was carried out by a suicide bomber, something that Iraqi officials denied.

In its online statements, IS said Wednesday's attacks targeted Shiite militiamen. The AP could not immediately verify the authenticity of the claim but it appeared on a website commonly used by the Sunni militants.

"Politicians are fighting each other in parliament and government while the people are being killed every day," said Hussein Abdullah, a 28-year old owner of an electrical appliances store who suffered shrapnel wounds.

"If they can't protect us, then they have to let us do the job," the father of two added.

Baghdad's Sadr City is a stronghold of supporters of influential Shiite cleric Muqtada al-Sadr who have been holding protests and sit-ins for months to demand an overhaul of the political system put in place by the United States following the 2003 overthrow of Saddam Hussein.

Last month, hundreds of al-Sadr's supporters stormed the heavily fortified Green Zone in the heart of Baghdad and broke into the parliament building.

Delivering a speech before the U.N. Security Council on Friday, the world body's envoy to Iraq, Jan Kubis, warned that the ongoing political crisis and chaos are only serving the interests of IS, urging the political leaders and civil society to work together to resolve the political turmoil.

IS still controls significant areas in northern and western Iraq, including Iraq's second-largest city of Mosul. Commercial and public places in Shiite-dominated neighborhoods are among the most frequent targets for the Sunni militants seeking to undermine Iraqi government efforts to maintain security inside the capital.

In February, IS carried out devastating back-to-back market bombings in Sadr City, killing at least 73 people.

According to the United Nations, at least 741 Iraqis were killed in April due to ongoing violence. The U.N. mission to Iraq put the number of civilians killed at 410, while the rest it said were members of the security forces. A total of 1,374 Iraqis were wounded that month, UNAMI said.