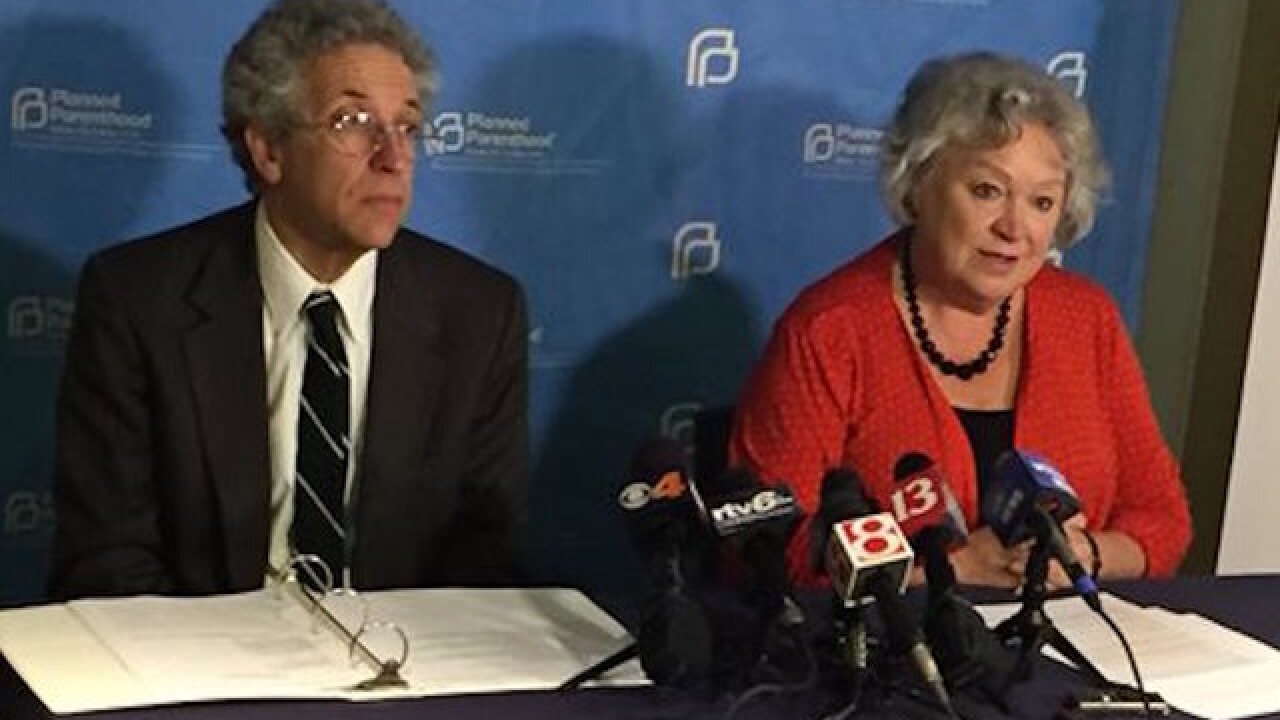 INDIANAPOLIS (AP) — The American Civil Liberties Union and Planned Parenthood of Indiana and Kentucky are suing the state of Indiana over its recently signed law that bans abortions sought because of genetic abnormalities, calling the law unconstitutional.

The federal lawsuit filed Thursday also challenges a provision that mandates an aborted fetus be buried or cremated. It seeks an injunction to keep the law taking effect on July 1.

The legal action follows a concerted "Periods for Pence" campaign, in which women bombarded the office of Indiana Gov. Mike Pence with phone calls to explain their menstrual cycles, offer details of cramps and ask for gynecologist recommendations, in the hope of embarrassing the Republican into backing out of one of the most restrictive abortion laws in the country.

ACLU of Indiana Legal Director Ken Falk said the U.S. Supreme Court "has repeatedly stressed" that the decision on whether to abort belongs to a woman, not the state.

"The State of Indiana's attempt to invade a woman's privacy and to control her decision in this regard is unprecedented and unconstitutional," Falk said at a news conference Thursday.

Planned Parenthood of Indiana and Kentucky president and CEO Betty Cockrum said the law, which Pence signed last month, shows the state doesn't respect women. Indiana and North Dakota are the only states that ban abortions sought because of genetic fetal abnormalities.

Pence's deputy press secretary, Stephanie Hodgin, said in an emailed statement that the Republican governor "has every confidence this law is constitutional."

"We will work with the Attorney General to defend the law that enhances information expectant mothers receive and enhances protection for the unborn," Hodgin said.

A statement from the state's Office of the Attorney General said challenges to passed laws are a part of the legislative process. "It is important to recognize that all laws passed by the elected legislators and signed by the Governor are presumed constitutional until a court determines otherwise, and I would ask that everyone respect this legal process," the statement said.

State Sen. Travis Holdman, the Markle Republican who sponsored the bill, declined to comment on the lawsuit.

But Indiana Right to Life, an anti-abortion group that backed the measure, said Planned Parenthood has fiscal motives for the lawsuit.

"This is the same song and dance we have seen from the abortion provider anytime they feel their lucrative abortion business is threatened," group president Mike Fichter said in a statement. "They oppose any common-sense law that protects women and children because they want to protect their bottom line."

Planned Parenthood said the bill also violates privacy rights. The organization does not ask patients why they are seeking an abortion, but the new law would require physicians to report if a fetal anomaly had been present prior to the abortion, which the groups say puts doctors at risk of being reprimanded. The law also requires fetuses to be buried or cremated, which the lawsuit called a costly requirement that does not exist for the disposal of medical waste for other types of operations.

The case will go to U.S. District Court Judge Tanya Walton Pratt, who in 2011 ruled against a law that would have prohibited entities who perform abortions from getting state funding.

North Dakota's Republican-led Legislature passed a measure in March 2013 that blocks abortions based on unwanted gender or a genetic defect. The state's sole abortion clinic, the Red River Women's Clinic in Fargo, has said the ban doesn't affect it in part because most genetic abnormalities are not detected until after 16 weeks into a pregnancy, when the clinic ceases providing abortions.