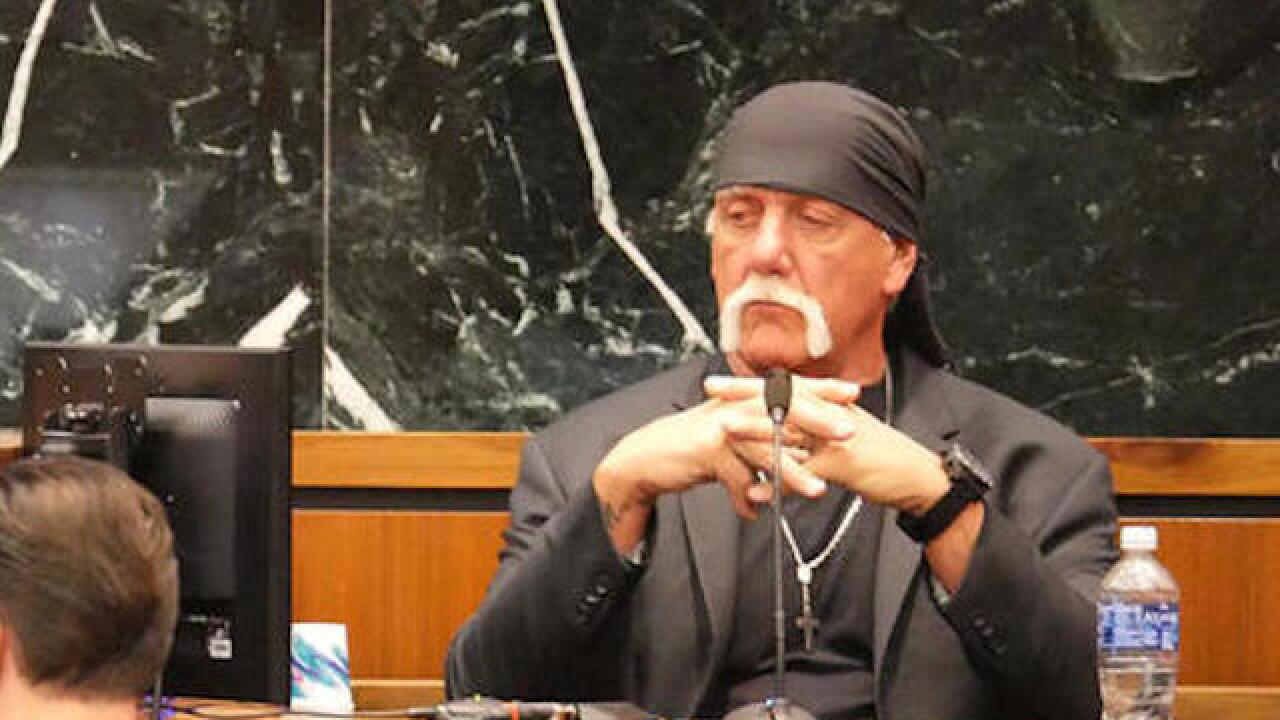 Copyright Associated Press
Boyzell Hosey
<p>Terry Bollea, known as professional wrestler Hulk Hogan, listens while testifying in his case against the news website Gawker at the Pinellas County Courthouse, in St. Petersburg, Fla., Monday, March 7, 2016. Hogan is suing Gawker for $100 million for publishing a video of him having sex with his best friend's wife. (Boyzell Hosey/Tampa Bay Times via AP, Pool)</p>

Hogan's new lawsuit Monday comes on the heels of winning a $140 million verdict against Gawker after it posted a video of him having sex with his then-best friend's wife. The three-week trial was a lurid inside look at the business of celebrity gossip and a debate over newsworthiness versus celebrity privacy.

Gawker denies that it leaked the sealed transcript to the National Enquirer. In the transcript, Hogan, who is white, makes several racist statements about his daughter's ex-boyfriend, who is black. Once the Enquirer published the story, WWE severed its longtime ties with the famous wrestler.

"Mr. Bollea said from the beginning that he would seek to hold all persons and entities fully responsible for their wrongful actions," his spokeswoman, Elizabeth Traub, wrote in a statement. "This lawsuit seeks to do just that."

The court filing was the latest chapter in a long legal saga for Hogan, Gawker and others.

"This is getting ridiculous," Gawker wrote in a statement. "Hulk Hogan is a litigious celebrity abusing the court system to control his public image and media coverage. ... It's time for Hulk Hogan to take responsibility for his own words, because the only person who got Hulk Hogan fired from the WWE is Hulk Hogan."

Gawker Media: "This is getting ridiculous."
Full statement: pic.twitter.com/R0I0JmYxmk

Hogan first sued Gawker after it posted a 2007 video of him having sex with Heather Clem, his then-best friend's wife. Hogan said he didn't know he was being taped by Bubba The Love Sponge Clem, a local Tampa DJ. During the Gawker trial, Hogan mournfully described how Clem betrayed his trust.

In March, a Pinellas County jury sided with Hogan, whose real name is Terry Bollea, and awarded him $115 million in compensatory damages plus an added $25 million in punitive damages. Hogan is a county resident.

Gawker is seeking a new trial, saying the jury didn't hear all of the evidence or from Clem.

Hogan says Calta and Loyd wanted to cause him "substantial economic harm" while furthering their broadcasting careers while they worked at Cox Radio, which is also named in the suit. The radio station didn't immediately return a telephone message.

In 2012, when the sex tape was leaked to Gawker, TMZ and other news outlets, Calta and Loyd were in a ratings war with Clem. Previously, Calta was part of Clem's on-air coterie, but they had a falling out.