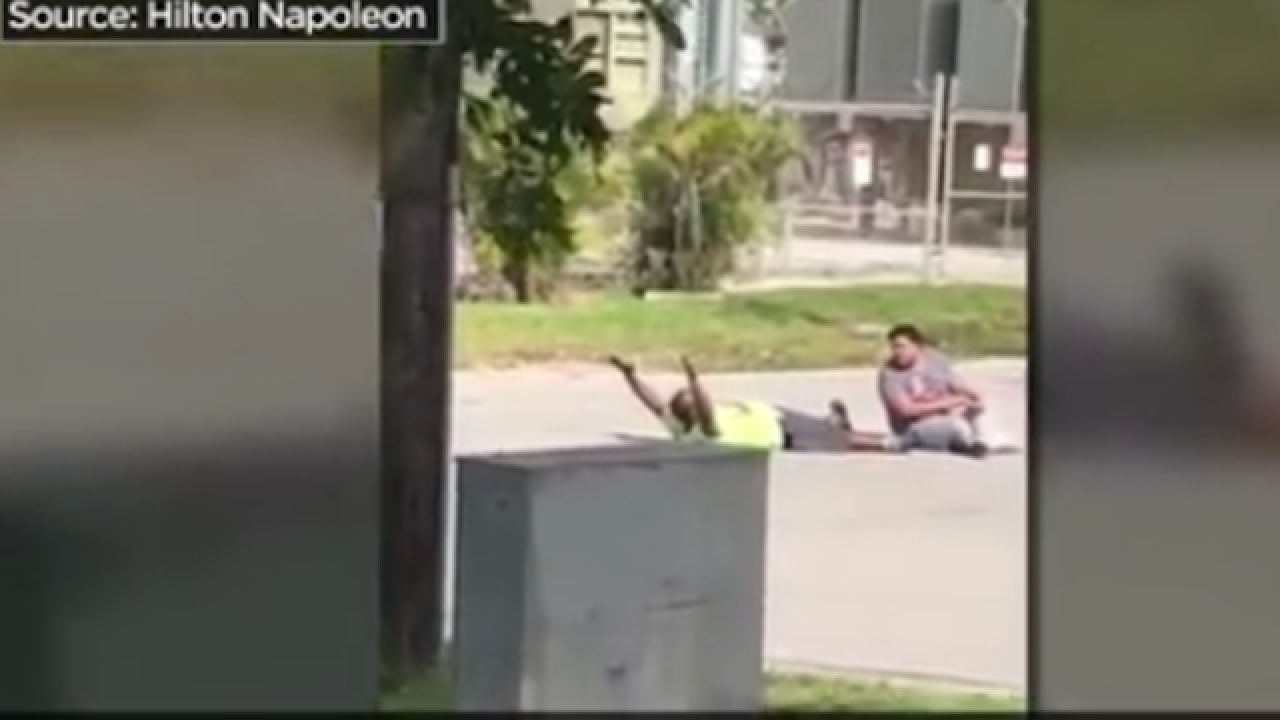 NORTH MIAMI, Fla. (AP) — A black therapist who was trying to calm an autistic man in the middle of the street says he was shot by police even though he had his hands in the air and repeatedly told them that no one was armed.

The moments before the shooting were recorded on cellphone video and show Charles Kinsey lying on the ground with his arms raised, talking to his patient and police throughout the standoff with officers, who appeared to have them surrounded.

The shooting comes amid weeks of violence involving police. Five officers were killed in Dallas two weeks ago and three law enforcement officers were gunned down Sunday in Baton Rouge, Louisiana. Before those shootings, a black man, Alton Sterling, 37, was fatally shot during a scuffle with two white officers at a convenience store. In Minnesota, 32-year-old Philando Castile, who was also black, was shot to death during a traffic stop. Cellphone videos captured Sterling's killing and aftermath of Castile's shooting, prompting nationwide protests over the treatment of blacks by police.

At a news conference Thursday, North Miami Police Chief Gary Eugene said the investigation had been turned over to the Florida Department of Law Enforcement and the office of the state's attorney. He called it a "very sensitive matter" and promised a transparent investigation, but he refused to identify the officer or answer reporters' questions.

"I realize there are many questions about what happened on Monday night. You have questions, the community has questions, we as a city, we as a member of this police department and I also have questions," he said. "I assure you we will get all the answers."

The chief said officers responded following reports of a man with a gun threatening to kill himself, and the officers arrived "with that threat in mind" — but no gun was recovered.

Kinsey, 47, said he was trying to coax his 27-year-old patient back to a facility that he had wandered from. Police ordered Kinsey and the patient, who was sitting in the street playing with a toy truck, to lie on the ground.

"Lay down on your stomach," Kinsey says to his patient in the video, which was shot from a distance and provided to the Miami Herald (http://hrld.us/2ahReMa). "Shut up!" responds the patient, who is sitting cross-legged in the road.

"He has a toy truck in his hand! A toy truck!" Kinsey says to officers who have their guns drawn. Kinsey said he was more worried about his patient than himself.

"I'm telling them again, 'Sir, there is no need for firearms. I'm unarmed, he's an autistic guy. He got a toy truck in his hand," Kinsey said.

After the shooting, Kinsey said he asked an officer why he was shot and the officer said "'I don't know.'"

Attorney General Loretta Lynch told reporters the Justice Department is aware of the shooting and working with local law enforcement to gather all of the facts and to decide how to proceed.

U.S. Rep. Frederica Wilson, who represents the area, said she was in shock.

"From what I saw, he was lying on the ground with his hands up. Freezing. But he was still shot," she said.

"This is not typical of North Miami," she said. "We're not accustomed to this tension. ... This cannot happen again."

The city has a population of about 62,000, nearly 60 percent African-American. The police chief is a 30-year law enforcement veteran who has been with North Miami police since 2013, but he was only sworn in as chief on July 12.

He began his career as a detective with the city of Miami Police Department and eventually became the first Haitian-born lieutenant within the department. He represented numerous law enforcement agencies within Miami-Dade County as a member of the Racial Profiling Committee, according to North Miami's website.

At his swearing in, he said he hoped to build a stronger relationship between police and the community, particularly in light of other police shootings across the country.

"It is not easy, but so often we talk about building a bridge between the community and the police departments," Eugene said, according to WPLG. "I believe if we do what we are paid to do, there would be no need for the bridge."

The officer has been placed on administrative leave, which is standard.

In an interview with The Associated Press, he declined to say from whom he had obtained the video.

The video does not show the moment of the shooting, and Napoleon said there was about a two-minute gap in which the person who shot the video had switched off, thinking nothing more noteworthy would happen. It then briefly shows the aftermath of the shooting.