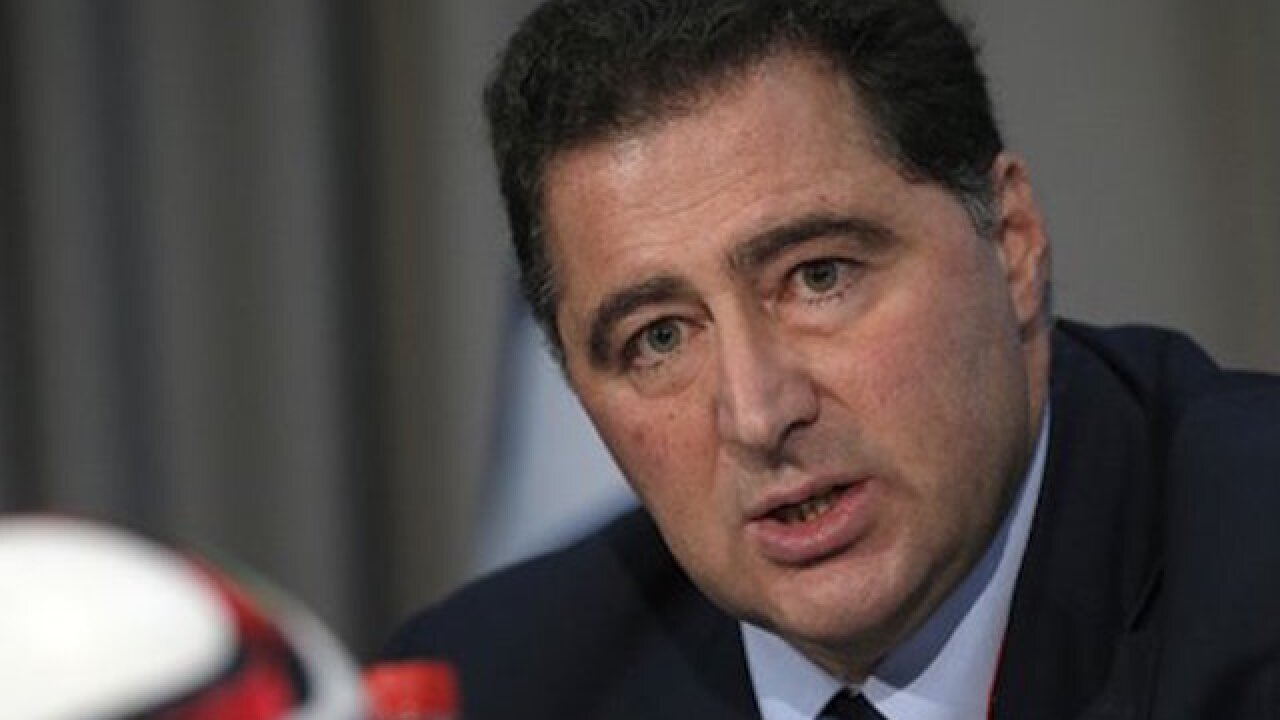 GENEVA (AP) — In a challenge to the integrity of Gianni Infantino, FIFA's compliance chairman resigned in protest on Saturday over what he sees as a power grab by the new president.

Scala's walkout — on the issue of taking hiring and firing power over himself and independent panels that monitor FIFA officials and money — comes amid claims of tension between the two men over the presidential salary.

It marks a major test for Infantino's presidency since he was elected to succeed Sepp Blatter in February promising more openness and modern leadership.

Scala has overseen FIFA's billion-dollar annual spending since 2012, and could previously be removed only by a vote of the now-211 member federations at their annual meeting.

Tensions between the two Swiss-Italian men were exposed on Friday at FIFA's congress in Mexico City. Members voted in new powers to Infantino's ruling council to fire Scala and ethics committee leaders who investigate corruption claims.

Those independent officials have been seen as a key check on FIFA since their appointments were key goals of a Blatter-led round of anti-corruption reforms in 2012.

"I am consternated about this decision," Scala said in a resignation statement, citing Friday's move, "because it undermines a central pillar of the good governance of FIFA, and it destroys a substantial achievement of the reforms."

FIFA reacted on Saturday saying Scala "misinterpreted" the decision and made "unfounded claims which are baseless."

Still, the exit of a key advocate for ending financial wrongdoing in world soccer will likely be noted by American and Swiss federal prosecutors who have ongoing criminal proceedings against dozens of soccer officials, including Blatter and several former FIFA vice presidents.

In a speech on Friday, Infantino declared FIFA's corruption-fueled crisis to be over.

Infantino later defended his new powers to remove key people overseeing his work when he was questioned at a news conference.

"Those that are making the comments have not really understood what we are doing," Infantino said in Mexico City, adding his council would have the powers for only one year.

"The judgments need to be made by the quality of the members which are sitting on these boards rather than by making speculations or putting intentions in the minds of people which are far from the reality."

Still, the tactic was criticized by former FIFA anti-corruption adviser Mark Pieth who helped bring Scala, then a pharmaceutical industry executive, to FIFA four years ago.

"(Infantino) is actually exactly working like (Michel) Platini and Blatter," Pieth told the Associated Press in a telephone interview late Friday. "We desperately want to go beyond that now."

Pieth suggested that Infantino disagreed over a salary offer of 2 million Swiss francs ($2.05 million) made by a three-member FIFA remuneration panel headed by Scala.

"It is personal, it is very clear," Pieth said. "He wants more than the 2 million that Domenico is offering him."

Publishing the presidential salary was a central pledge of the latest reform round agreed in February, in which Infantino and Scala were central players.

It was later disclosed that the incoming president's salary was intended to be less, and that the new secretary general would be the highest paid employee.

That post was filled on Friday when Infantino said long-time United Nations official Fatma Samoura of Senegal would arrive in Zurich next month. She will be the first woman, first non-European and first non-white secretary general in FIFA's 112-year history.

Samoura's hiring was another potential source of Infantino-Scala conflict. Infantino moved to make a surprise announcement without an open recruitment process which Scala had said was necessary for FIFA to behave like a transparent, billion-dollar corporation.

Asked on Friday about his salary negotiations, Infantino said it was "not yet fixed as far as I am concerned," and it was not important.

"It will henceforth be possible for the council to impede (ethics) investigations against single members at any time, by dismissing the responsible committee members or by keeping them acquiescent through the threat of a dismissal," he said.

"Thereby, those bodies are factually deprived of their independence and are in danger of becoming auxiliary agents of those whom they should actually supervise."

FIFA hit back, saying it "regrets that Mr. Scala has misinterpreted the purpose of the decision."

"The council fully respects the independence of the audit and compliance and the ethics committees, and any suggestions to the contrary are without merit."

Pieth, a criminology professor at the University of Basel in Switzerland, said giving Infantino's council new powers could threaten the credibility of reforms intended to show that FIFA could change its culture.

"They are not worth the paper they are written on," Pieth said, suggesting Scala had in recent days "not been accepting offers to step down."