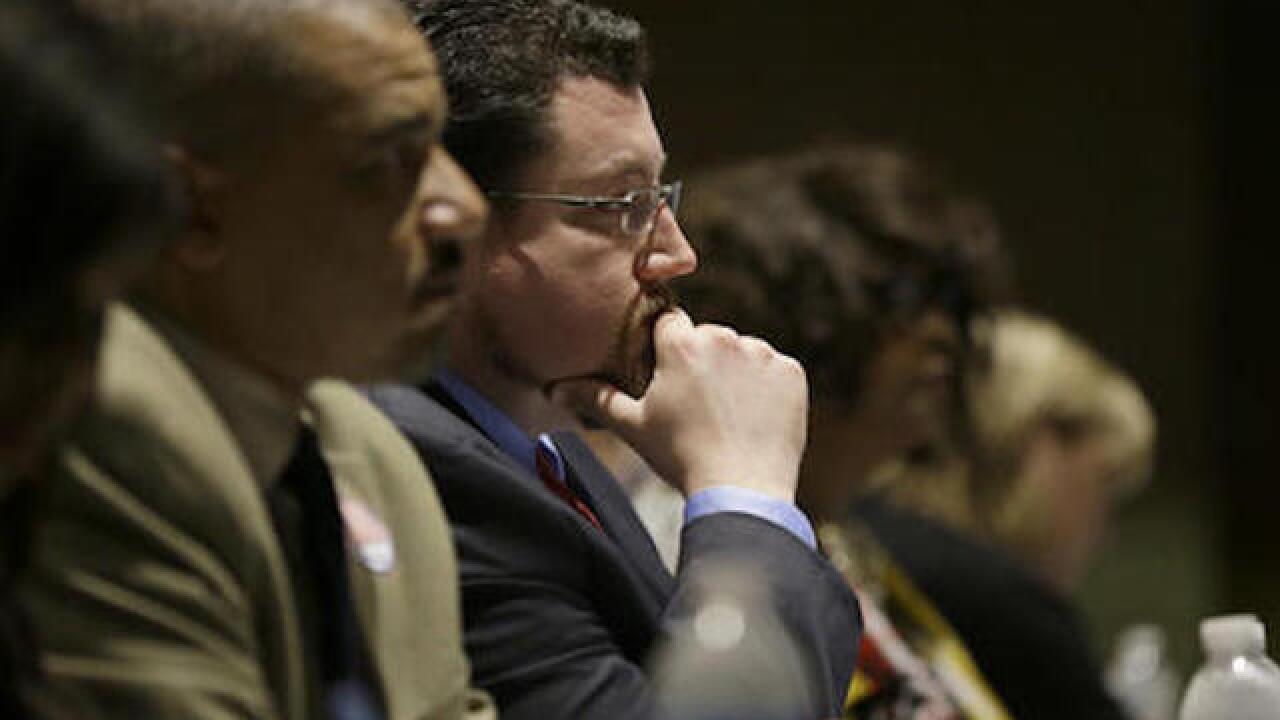 Copyright Associated Press
Jeff Roberson
<p>FILE - In this March 15, 2016 file photo, Ferguson Mayor James Knowles III listens during a city council meeting in Ferguson, Mo. The St. Louis suburb of Ferguson, under scrutiny since a white police officer fatally shot a black 18-year-old, may not be able to comply with all terms of a settlement with the U.S. Department of Justice if local voters fail to approve two tax increases, the city's mayor said Wednesday, March 30, 2016. (AP Photo/Jeff Roberson File)</p>

FERGUSON, Mo. (AP) — The St. Louis suburb of Ferguson, under scrutiny since a white police officer fatally shot a black 18-year-old, may not be able to comply with all terms of its settlement with the U.S. Department of Justice if local voters fail to approve two tax increases, the city's mayor said Wednesday.

Voters will decide the fate next Tuesday of proposed increases in sales and property taxes for the municipality. Mayor James Knowles III said passage of both tax increases would wipe out about 80 percent of the city's $2.9 million deficit, but failure to pass them could mean layoffs of police and firefighters.

"If we don't pass both I would say it would be highly unlikely to fully comply with the consent decree," Knowles said in an interview with The Associated Press.

Officer Darren Wilson fatally shot Michael Brown on Aug. 9, 2014, during a street confrontation, sparking widespread protests. A grand jury and the U.S. Justice Department cleared Wilson of wrongdoing, but a Justice Department investigation cited alarming patterns of racial bias in policing and a municipal court system that generated revenue largely on the backs of poor and minority residents.

Weeks after initially rejecting the agreement, the Ferguson City Council approved it on March 15, ending a federal lawsuit alleging racial bias in the criminal justice system. The agreement calls for the hiring of a monitor; diversity training for police; purchase of software and hiring of staff to analyze records on arrests, use of force and other police matters; and outfitting all officers and jail workers with body cameras.

City Manager De'Carlon Seewood has said measures associated with the agreement will cost Ferguson slightly more than $1 million in the first year, about $700,000 in the second year and $600,000 in year three.

The cost of the reforms is high for a municipal government already facing a hefty deficit due largely to fallout from the shooting — lost sales tax revenue from businesses damaged in fires and looting, legal costs and lost income from municipal court reforms already in place.

One of the proposed tax increases would impose an economic development sales tax, the other a property tax increase that would cost about $76 annually for a home worth $100,000. Even with passage of both, Knowles said, every city employee will take a 3 percent pay cut as well as a cut in the city's contribution to benefits in the fiscal year that begins July 1 to eliminate the rest of the deficit and to pay for stipulations of the Justice Department agreement.

If the tax measures fail, Knowles said the city would likely be forced to lay off 12 of the 55 members of the police department, along with six firefighters, and would close one of its two fire stations.

If police jobs have to be cut, it's doubtful the city could implement the type of community policing required by the Justice Department settlement, Knowles said. It would also be difficult to pay for things such as the software and police record analysts.

In a letter to Knowles and City Council members earlier this month, Justice Department Civil Rights Division leader Vanita Gupta wrote that "it is not uncommon for financial or staffing challenges to arise" when implementing DOJ agreements.

"Provided those challenges are genuine, approached in good faith, and not pretexts for non-compliance, we are committed to working with jurisdictions to overcome those challenges," she wrote.

A message seeking comment from a Justice Department spokeswoman on Wednesday was not returned.

The agency and Ferguson reached a tentative agreement in late January after months of negotiations, but the City Council rejected the plan in February over cost concerns, prompting the Justice Department to sue the next day. The suit was dropped after the council changed course and approved the deal in March.

Key to the change of heart was the written assurance from Gupta that the city won't be required to provide its police officers with pay raises — a provision they feared could bankrupt Ferguson. A city analysis had indicated implementation costs could approach $4 million in the first year alone if the raises were required.