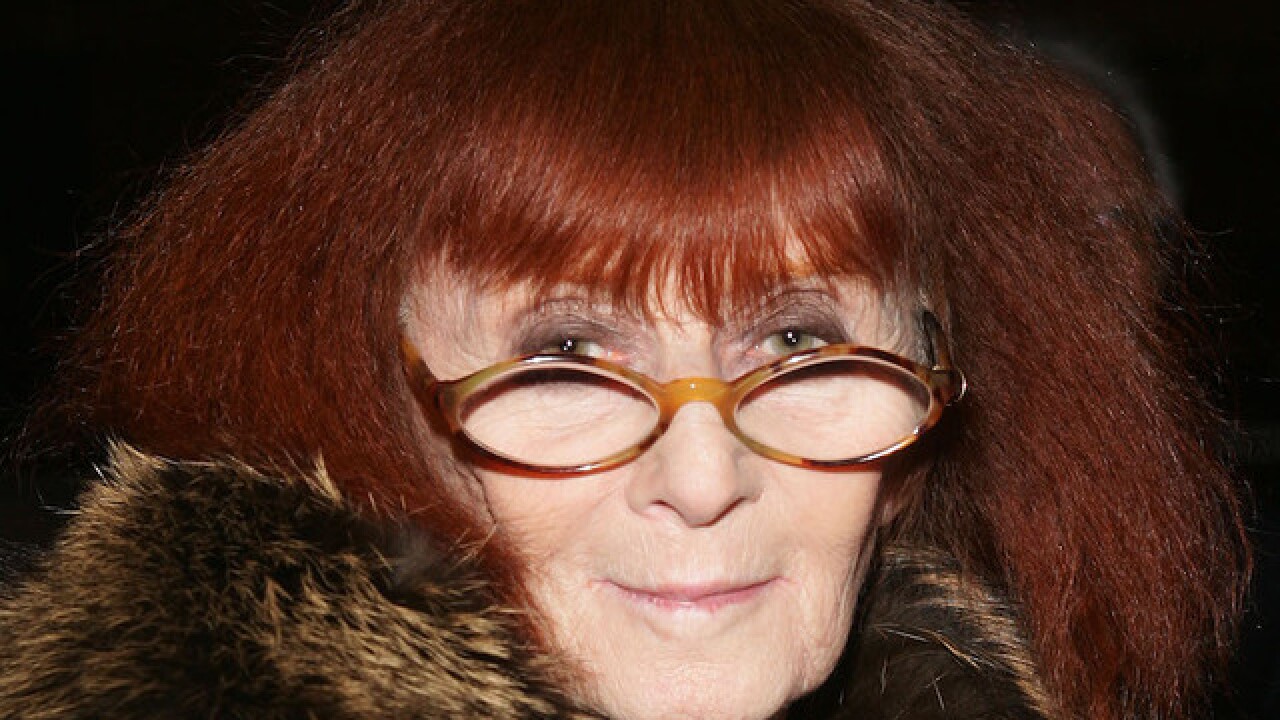 PARIS (AP) — Sonia Rykiel, a French designer dubbed the "queen of knitwear" whose relaxed sweaters in berry-colored stripes and eye-popping motifs helped liberate women from stuffy suits, has died at 86.

President Francois Hollande's office announced her death in a statement Thursday, praising her as "a pioneer" who "offered women freedom of movement." His office didn't provide further details, and the Sonia Rykiel fashion house in Paris wouldn't immediately comment.

For the generation of women who came of age in the heady 1960s and '70s, Rykiel, with her hallmark bright orange hair, came to symbolize the new era of freedom.

She also penned several novels — including one about a dress and its various incarnations — and figured in director Robert Altman's satirical 1994 look at the fashion industry, "Pret-a-Porter."

Rykiel got her start by designing knit maternity dresses for herself. She became a fixture of Paris' fashion scene starting in 1968 when she opened her first ready-to-wear shop on the Left Bank at a time when student riots were challenging France's bourgeoisie establishment. The designer's empire grew to include menswear and children's lines as well as accessories, perfumes and home goods, sold in the label's stores on four continents.

Her daughter, Nathalie Rykiel, who as a young woman used to model her mother's garments on the catwalk, has long helped manage the fashion house. The business was among France's last major family-owned labels until it was sold to a Hong Kong investment fund in 2012.

Rykiel's star pieces include the "poor boy" sweater — often in black with jewel tone stripes or emblazoned with messages or graphic motifs like oversized red lips — knit tops with embroidered roses and funky, rhinestone-studded berets. She developed new techniques like inside-out stitching and no-hem finishings that embodied the freewheeling spirit of the times.

Rykiel, whose maiden name was Flis, was born in Paris on May 25, 1930. She married Sam Rykiel, the owner of a Paris boutique, and had Nathalie at 25.

It was motherhood that put her path of fashion design. After designing maternity outfits, she went on to create knit garments for her husband's boutique, called Laura. By 1970, the fashion trade paper Women's Wear Daily had dubbed Rykiel the "queen of knitwear."

Still, early on in her career, Rykiel was wracked by doubts.

"When I started in fashion, for the first 10 years, I said to myself every day, 'I'm going to quit tomorrow. People are going to figure out that I don't know anything,'" she told the Le Nouvel Observateur in a 2005 interview. "I always thought I'd be discredited in the end."

Rykiel is survived by Nathalie and son Jean-Philippe. No information about a memorial ceremony was immediately available.