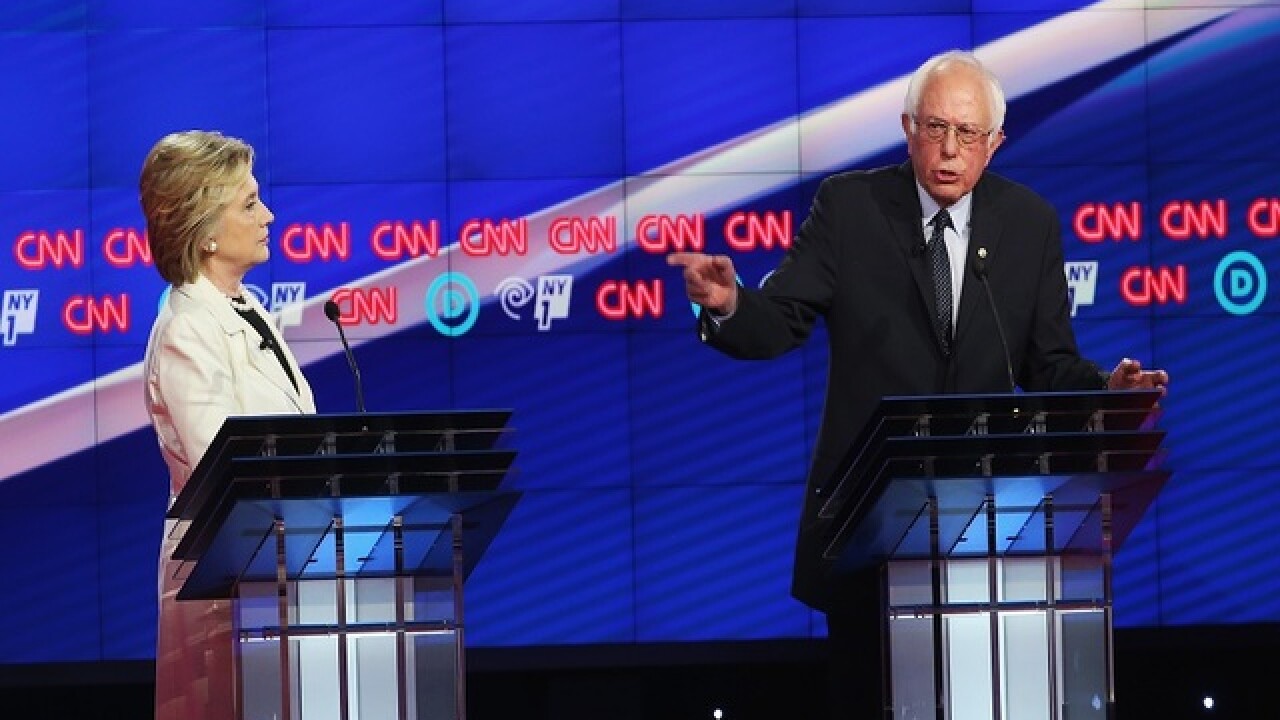 Democratic presidential candidates Hillary Clinton and Bernie Sanders battled it out in New York Thursday night – a fiery event that marked the last debate before the state’s crucial primary next week.
We’ve teamed up with PolitiFact to determine the accuracy of certain claims made by the candidates, and we will continue updating this story as more fact checks become available.
Fact check #1: Clinton charged that Sanders voted for a 2005 law that put restrictions on people’s ability to sue the gun industry for crimes committed using their products – a law that Clinton said gave higher standards to toy guns than real guns.
Clinton, who voted against the law, said specifically, "We have tougher standards holding toy gun manufacturers and sellers to account than we do for real guns.”
But how true was her statement?
The law at issue, the 2005 Protection of Lawful Commerce in Arms Act, was signed by President George W. Bush. Seen as a victory for gun rights advocates, the law protects gun dealers and manufacturers from lawsuits when their products are misused in ways such as committing crimes.
PolitiFact notes: “There are several situations that are not protected from lawsuits under the law. It does not protect gun dealers who transfer a gun knowing it would be used for criminal purposes, nor those who knowingly break state or federal law if the violation results in harm. Gun manufacturers can also be sued if the gun, when used properly, causes injury because the product is defective.”
A couple experts told PolitiFact that Clinton’s statement is unsound because the law sought to impose equivalent, rather than fewer, standards for gun makers that are already established.
And as it stands, the victim of a crime or injury committed with a toy generally cannot sue the toy manufacturer – so there is really not much difference there.
However, other experts say real gun manufacturers are immune to certain lawsuits that toy manufacturers aren’t – for example, if an injury is caused by a product defect coupled with a criminal misuse of the product, a toy gun manufacturer could be held liable.
However, a real gun manufacturer could not under the 2005 law.
"You’ve granted an immunity to the gun industry that you haven’t granted to any other industry," said Mark Geistfeld, a law professor at New York University and an expert in products liability.
Geistgeld noted that this supports the gist of Clinton’s point: that Sanders holds guns to a lower standard.
PolitiFact’s ruling?
Half True – While scholars who believe the law made the gun industry less susceptible to liability than other industries (including the toy gun industry), other scholars think the law made the gun industry’s liability about the same.
See the full finding here .
Fact check #2: In a statement made to support his well-respected everyman persona, Sanders said, "I remain one of the poorer members of the United States Senate.”
PolitiFact did some research to determine how accurate that claim is.
To do so, it looked at the most frequently cited rundown of congressional wealth, which is an annual study by the Capitol Hill newspaper Roll Call.
The data found that Sanders’ net worth does rank him in the bottom one-fifth of the 100-member chamber, with the 19th lowest net worth. Below Sanders’ net worth included members like Mike Lee (R-Utah), Lindsey Graham (R-S.C.) and former presidential candidate Marco Rubio (R-Fla.).
PolitiFact notes a couple caveats, including that the survey is based on congressional financial disclosure forms, which offer the public only broad ranges of income in various categories.
To determine minimum net worth, Roll Call used the total minimum reported value of the lawmakers’ assets minus the total minimum reported value of their liabilities.
Basically, the real amount could be higher.
PolitiFact further notes: “In addition, the law exempts various types of holdings from disclosure, including the value of a primary residence, the value of personal possessions that aren’t held for investment purposes, and the value of retirement accounts.”
Roll Call has subsequently cautioned in its survey that "the disclosure forms are imperfect at best."
However, based on the information, Sanders is largely correct that he’s on the lower end of the chamber’s income scale, with a median net worth sitting at $1.1 million.
PolitiFact’s ruling?
Mostly True – A credible calculation using financial disclosure forms put Sanders as having the 19th lowest net worth in the Senate, but data is imperfect.