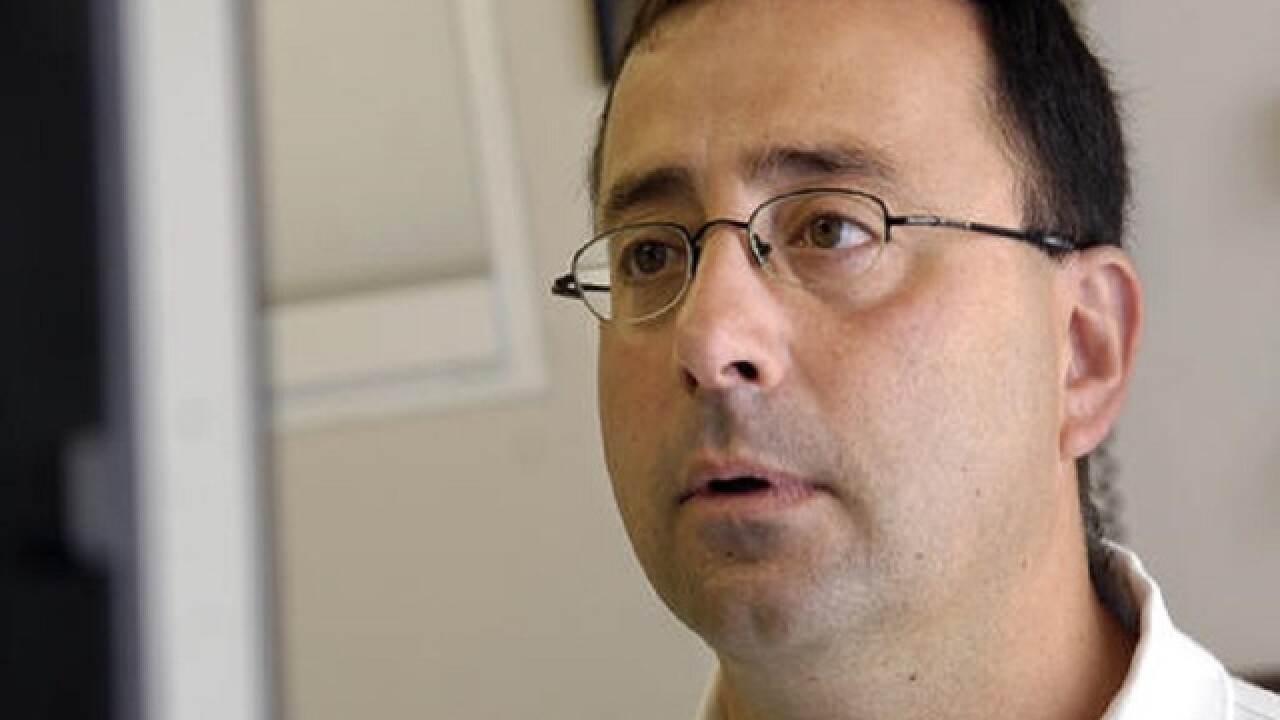 Becky Shink
<p>In a July 15, 2008 photo, Dr. Larry Nassar works on the computer after seeing a patient in Michigan. Multiple gymnasts, including a member of the 2000 U.S. women's Olympic team, said they were sexually abused by Nassar, a former longtime doctor for USA Gymnastics, court documents and interviews show. (Becky Shink/Lansing State Journal via AP)</p>

EAST LANSING, Mich. (AP) — A doctor accused of sexual abuse by two gymnasts — including a former U.S. Olympian — was investigated by Michigan State University authorities in 2014 over a another allegation of misconduct, but the school found no violation of its policy.
School spokesman Kent Cassella said Tuesday that local prosecutors did not file charges two years ago following an investigation by MSU police.
The revelation of a complaint by the Michigan State graduate comes after two gymnasts, including a member of the 2000 U.S. women's Olympic team, said they were sexually abused as teenagers by Larry Nassar, a former longtime doctor for USA Gymnastics.
Nassar is accused of sexually groping and fondling the Olympian during her elite career, according to a lawsuit filed last week in California by the athlete under the name "Jane Doe."
The second gymnast, Rachael Denhollander of Louisville, Kentucky, told the Indianapolis Star newspaper that Nassar sexually abused her in 2000 while she underwent treatment for lower back pain at Michigan State, where Nassar is a faculty member. She said she filed a complaint last month with university police.
Michigan State temporarily reassigned Nassar, 53, from clinical and patient duties as of Aug. 30, a day after Denhollander's complaint was made to authorities. Cassella said that was the first time the school was aware of the allegation.
Cassella said the school investigated Nassar previously, however.
"In a separate incident in 2014, MSU authorities investigated a complaint of misconduct against Larry Nassar," Cassella said in an email. "The complaint, filed by a recent female MSU graduate at the time, involved an allegation of abuse during a medical procedure. An administrative investigation revealed no violation of MSU policy, and the local prosecutor's office did not file charges after an investigation by MSU police.
"During the investigation, Nassar was temporarily reassigned from his clinical and patient duties."
Nassar's attorney, Matthew Borgula, defended the doctor in an email to The Associated Press on Tuesday night.
"MSU and local authorities conducted an investigation and found that there was no violation of law, nor of MSU policy and no lawsuit was ever filed. Dr. Nassar met with authorities at the time and completely cooperated," Borgula said. "This claim, like the current allegations bantered about in the press, are wholly without merit. Dr. Nassar has never conducted any medical procedure at MSU without the full consent of his patient, and if the patient is a minor, without the parent's consent.
"He has never been sued, until the recent lawsuit filed in California, and he has never been charged with a crime," it continued. "He has been a physician for over 23 years, and part of the USA Gymnastics medical team for 29. During that time, no one has ever lodged a complaint against him that he was aware."
USA Gymnastics released a statement Monday night indicating that it cut ties with Nassar when the organization's President Steve Penny went to authorities immediately after learning of athlete concerns about Nassar in the summer of 2015.
When asked Tuesday by the AP if it notified Michigan State or other entities affiliated with Nassar about the concerns raised, USA Gymnastics spokesperson Leslie King referred back to the organization's statement on Monday.
"USA Gymnastics has cooperated fully with the law enforcement agency since we first notified them of the matter, including — at their request — refraining from making further statements or taking any other action that might interfere with the agency's investigation," the statement read.
USA Gymnastics has not identified the organization it contacted, also at the request of the law enforcement agency.
USA Gymnastics said Tuesday night it was not contacted about Michigan State's 2014 investigation of Nassar.
Cassella said the school didn't consider contacting USA Gymnastics in 2014 because "the administrative investigation revealed no violation of MSU policy" and no charges were filed.
Copyright 2016 The Associated Press. All rights reserved. This material may not be published, broadcast, rewritten or redistributed.