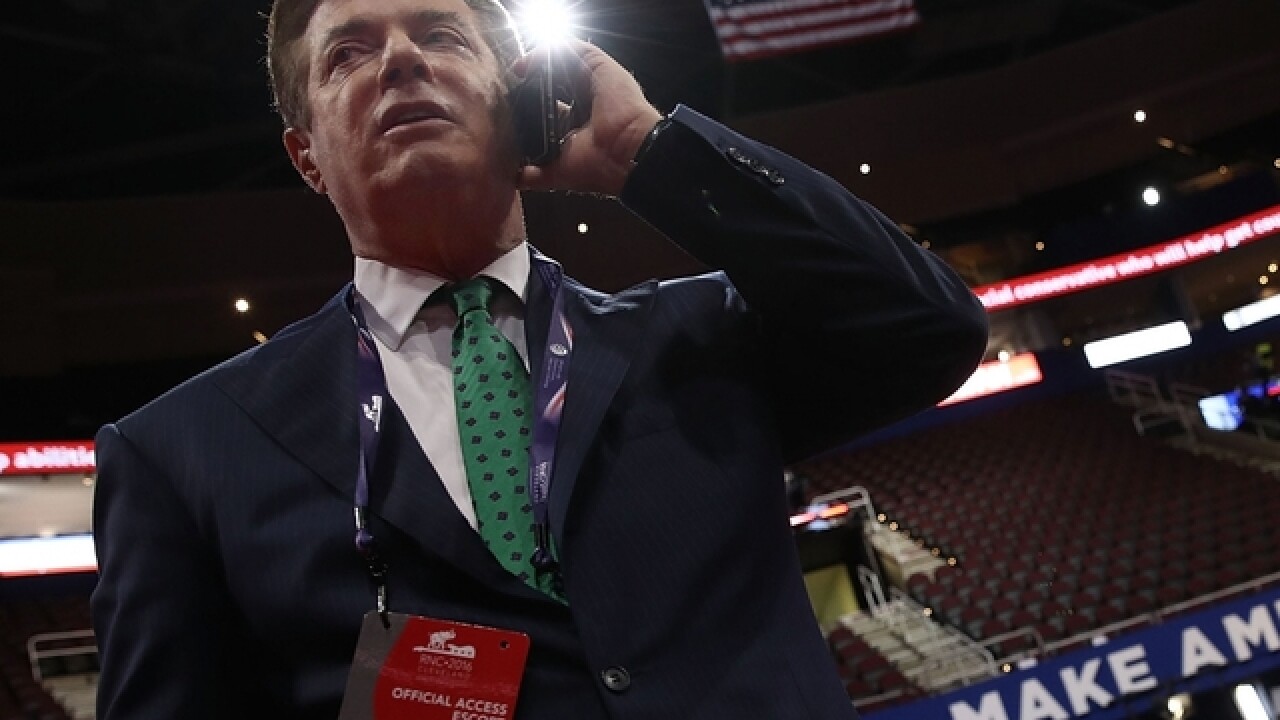 The lobbying included attempts to gain positive press coverage of Ukrainian officials in The New York Times, The Wall Street Journal and The Associated Press. Another goal: undercutting American public sympathy for the imprisoned rival of Ukraine's then-president. At the time, European and American leaders were pressuring Ukraine to free her.

Gates personally directed the work of two prominent Washington lobbying firms in the matter, the emails show. He worked for Manafort's political consulting firm at the time.

Manafort's and Gates' activities carry outsized importance, since they have steered Trump's campaign since April. The pair also played a formative role building out Trump's campaign operation after pushing out an early rival. Trump shook up his campaign's organization again this week, but Manafort and Gates retain their titles and much of their influence. The new disclosures about their work come as Trump faces criticism for his friendly overtures to Russian President Vladimir Putin.

The two men have previously said they were not doing work that required them to register as foreign agents. Neither commented when reached by the AP on Thursday.

The emails show Gates personally directed two Washington lobbying firms, Mercury LLC and the Podesta Group Inc., between 2012 and 2014 to set up meetings between a top Ukrainian official and senators and congressman on influential committees involving Ukrainian interests. Gates noted in the emails that the official, Ukraine's foreign minister, did not want to use his own embassy in the United States to help coordinate the visits.

Gates also directed the firms to gather information in the U.S. on a rival lobbying operation, including a review of its public lobbying disclosures, to determine who was behind that effort, the emails show.

And Gates directed efforts to undercut sympathy for Yulia Tymoshenko, an imprisoned rival of then-President Viktor Yanukovych. The Ukrainian leader eventually fled the country in February 2014 during a popular revolt prompted in part by his government's crackdown on protesters and close ties to Russia.

The emails do not describe details about the role of Manafort, who was Gates' boss at the firm, DMP International LLC. Current and former employees at Mercury and the Podesta Group, some of whom spoke on condition of anonymity because they are subject to non-disclosure agreements, told AP that Manafort oversaw the lobbying efforts and spoke by phone about them. Gates was directing actions and seeking information during the project using an email address at DMP International, which he still uses.

Manafort did not return phone and email messages Thursday from the AP to discuss the project. After AP reported earlier this week that Manafort helped the Ukrainian political party secretly route at least $2.2 million to the two Washington lobbying firms, Manafort told Yahoo News that AP's account was wrong. "I was not involved in any payment plans," Manafort said.

Gates said Thursday he was busy with Trump campaign focus groups and promised to review AP's questions in writing, then did not respond.

Manafort also said in a statement earlier this week that he never performed work for the governments of Ukraine or Russia. Gates previously told the AP, "At no time did our firm or members provide any direct lobbying support."

Under the U.S. Foreign Agents Registration Act, people who lobby on behalf of foreign political leaders or political parties must provide detailed reports about their actions to the Justice Department. A violation is a felony and can result in up to five years in prison and a fine of up to $250,000.

The emails illustrate how Gates worked with Mercury and the Podesta Group on behalf of Ukrainian political leaders. None of the firms, nor Manafort or Gates, disclosed their work to the Justice Department counterespionage division responsible for tracking the lobbying of foreign governments.

"There is no question that Gates and Manafort should have registered along with the lobbying firms," said Joseph Sandler of Sandler Reiff Lamb Rosenstein & Birkenstock, a Democratic-leaning Washington law firm that advises Republican and Democratic lobbyists.

Manafort and Gates have said that they did not disclose their activities to the Justice Department because they did not oversee lobbying efforts and merely introduced the Washington firms to a Brussels-based nonprofit, the European Center for a Modern Ukraine, which they said ran the project. The center paid Mercury and the Podesta Group a combined $2.2 million over roughly two years.

In papers filed in the U.S. Senate, Mercury and the Podesta Group listed the European nonprofit as an independent, nonpolitical client. The firms said the center stated in writing that it was not aligned with any foreign political entity.

The 1938 U.S. foreign agents law is intended to track efforts of foreign government's unofficial operatives in the United States.

Political consultants are generally leery of registering under it, because their reputations can suffer once they are on record as accepting money to advocate the interests of foreign governments — especially if those interests conflict with America's. Moreover, registering under the law would have required Gates, Manafort or the lobbying firms to disclose the specifics of their lobbying work and their efforts to sway public opinion through media outreach.

Ina Kirsch, who runs the European nonprofit, has said the group's work was independent and its goal was to bring Ukraine into the fold of Europe. The center has declined for years to reveal specific sources of its funding.

Gates confirmed to AP previously that he was working for Ukraine's ruling party, the Party of Regions, at the time.

The chairman of the Podesta Group, Tony Podesta — the brother of Hillary Clinton campaign chairman John Podesta — said his firm believed Gates was working for the nonprofit. Podesta said he was unaware of the firm's work for the Ukraine's Party of Regions, led by Yanukovych. On Thursday, his firm said it had nothing new to add.

Mercury's founder, Vin Weber, an influential Republican and former congressman, told the AP that his firm was aware of Manafort's and Gates' affiliation with Ukraine's political party and said Gates never participated in Mercury's lobbying work. Weber did not respond to questions after AP said it had obtained emails contradicting this.