Trump says how he will fund border wall 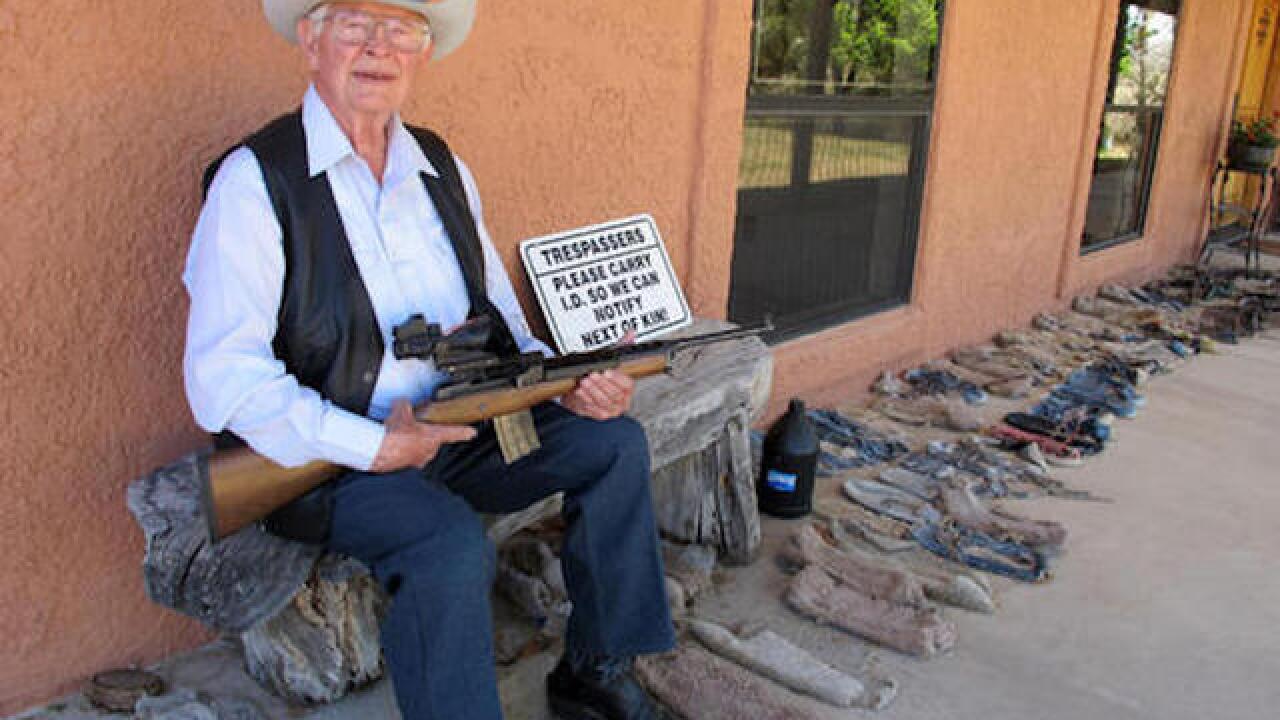 Copyright Associated Press
Brian Skoloff
<p>In this Tuesday, March 15, 2016 photo, Jim Chilton poses for a photo on the front porch of his home on his 50,000 acre ranch along the U.S-Mexico border in Arivaca, Ariz. Donald Trump's ambitious plan to build a giant wall on the border with Mexico is stirring up a range of emotions among voters who live there with some saying it would divide the two countries and others who say nothing short of a wall will fix the illegal immigration and drug smuggling problems. (AP Photo/Brian Skoloff)</p>

WASHINGTON (AP) — Donald Trump would try to force Mexico to pay for a border wall by targeting billions of dollars in remittances sent by immigrants living in the U.S., according to a memo released by his campaign Tuesday.

The memo outlines in new detail how Trump would try to compel Mexico to pay for the 1,000-mile wall he's promised to build along the Southern border if he becomes president.

In his proposal, Trump threatened to change a rule under the USA Patriot Act, an anti-terrorism law, to cut off a portion of the funds sent to Mexico through money transfers known as remittances. His plan would also bar non-Americans from wiring money outside of the U.S. unless they can provide documentation establishing their legal status in the country.

Trump said he would withdraw the threat if Mexico makes "a one-time payment of $5-10 billion" to finance the wall.

"It's an easy decision for Mexico: make a one-time payment of $5-10 billion to ensure that $24 billion continues to flow into their country year after year," the memo reads.

"Good luck with that," President Barack Obama said Tuesday in response to questions about Trump's proposal. He warned of the ramifications such a plan would have on the Mexican economy which, in turn, would drive more immigrants to cross the border in search of jobs.

"People expect the president of the United States and the elected officials in this country to treat these problems seriously, to put forward policies that have been examined, analyzed are effective, where unintended consequences are taken into account," Obama said. "They don't expect half-baked notions coming out of the White House. We can't afford that."

The U.S. is home to about 12 million Mexicans, some living here illegally, according to various research organizations that monitor trends in immigration. They and other migrants use money transfer agents or banks to send money home, often with the objective of supporting their families.

The Mexican central bank reported that money sent home by Mexicans overseas hit nearly $24.8 billion last year, overtaking oil revenues for the first time as a source of foreign income. Cutting off those transfers would therefore represent a significant blow to the Mexican economy. Trump's campaign says that money "provides substantial leverage for the United States to obtain from Mexico the funds necessary to pay for a border wall."

The memo also lists other potential areas for leverage, including threats of trade tariffs, cancelling visas — including targeting "business and tourist visas for important people in the Mexican economy" — and increasing visa fees, including includes fees on border crossing cards.

The release of the memo was first reported by the Washington Post early Tuesday.

This is not the first time that Trump has spelled out options for pressuring Mexico into paying for his signature policy proposal.

In an immigration overhaul plan released in August, Trump's campaign suggested a number of options for compelling Mexico to pay for the wall. Those included impounding "all remittance payments derived from illegal wages," increasing fees on temporary visas issued to Mexican CEOs and diplomats -- "and if necessary cancel them" -- increasing fees on border crossing cards, increasing fees on NAFTA worker visas from Mexico, and increasing fees at ports of entry between the two countries.

Trump's campaign did not immediately respond to questions, including whether he still envisions impounding any money. It is also unclear whether Trump would seek any input from Congress. He and other Republicans have long criticized President Barack Obama for relying too heavily on executive orders to ram through his agenda.

Trump's wall is his signature policy proposal — and mere mention of the word elicits booming cheers and applause at his rallies, where supporters sometimes dress in wall shirts and costumes. Trump often leads call-and-response sessions where he asks his audience who will pay for the wall.

"Mexico!" they thunder in response.

The billionaire businessman has estimated his proposed wall would cost between $10 billion and $12 billion, and has argued that it would protect the country from illegal border crossings as well as halting drug shipment.

The memo's release comes the day of the Wisconsin primary, where Trump has been trailing rival Ted Cruz is some recent opinion surveys.

Mexico's President Enrique Peña Nieto has said his country will not pay for any such wall. In an interview with the Excelsior newspaper last month, Pena Nieto compared Trump's rhetoric to that of dictators Adolf Hitler and Benito Mussolini, saying that language like his has led to "very fateful scenes in the history of humanity."

"Wow, I think what that guy is doing is wrong, because the Americans don't do the jobs that Mexicans do," said Altamirano, expressing concern about the impact on Mexican families.

"That money that they send so the family here can live, I don't know how they could do that to them. "