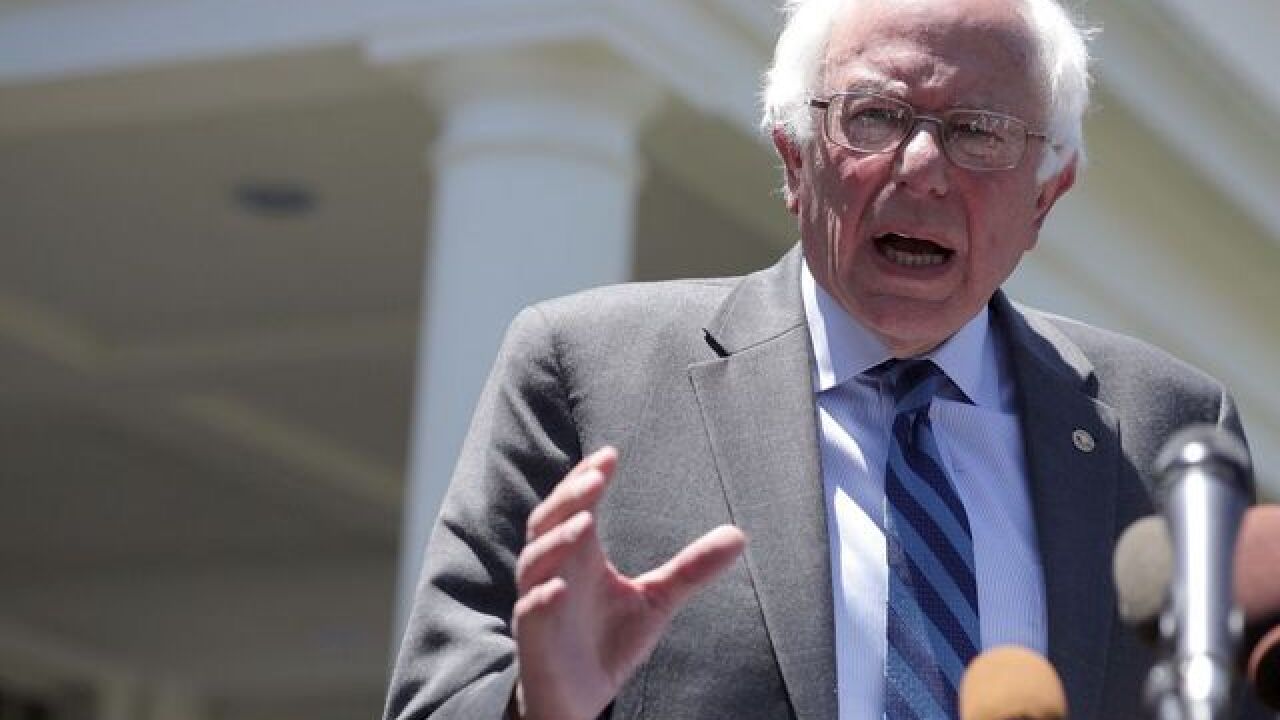 PHILADELPHIA (AP) — As the Democratic National Convention began in sweltering Philadelphia, the DNC released a statement apologizing to Sanders and his supporters "for the inexcusable remarks made over email." The party said the comments do not reflect the party's values or commitment to neutrality in the primary process.

The statement was signed by DNC leaders, though chairwoman Debbie Wasserman Schultz's name was notably absent.

JUST IN: DNC issues apology to Sanders and his supporters in statement as #DNCinPHL kicks off. pic.twitter.com/HysnRsJkxl

There were some signs that Sanders' supporters did not plan to go quietly. Even during the invocation, chants of "Bernie" echoed through the arena.

For presumptive nominee Hillary Clinton, it was a turbulent start to a historic four-day gathering that will culminate in the nomination of the first woman to lead a major U.S. political party. It also sapped some of Clinton's energy coming out of Republican Donald Trump's chaotic convention last week and the well-received rollout Saturday of her running mate, Virginia Sen. Tim Kaine.

Sanders will play a crucial role in determining whether Clinton can calm the tensions. He greeted his loyal delegates ahead of his convention address Monday, imploring them to help him elect Clinton and prevent Trump from winning the White House, though he spent little time making a robust case for his former rival.

The frustration some Sanders' supporters still have with Clinton — a candidate they see as entrenched in a political system they distrust —was evident, with the crowd breaking into a chorus of boos.

"Brothers and sisters, this is the real world that we live in," Sanders said as he tried to quiet the crowd. "Trump is a bully and a demagogue."

Sanders was the closing speaker on a night also featuring Mrs. Obama, who remains a wildly popular figure; New Jersey Sen. Cory Booker, a young black lawmaker and rising Democratic star, and Massachusetts Sen. Elizabeth Warren, a favorite of liberals and one of the party's toughest critics of Trump.

Clinton is promising a stark contrast to last week's Republican gathering, an often chaotic affair that featured a heavy dose of pessimism about the economy and national security.

"I don't see how you run for president of the United States if you spend all your time trash-talking the United States," she told supporters. "We're going to have a convention this week that highlights success stories."

The controversy over some 19,000 leaked DNC emails, however, threatened to complicate those plans. The correspondence, posted by WikiLeaks over the weekend, showed top officials at the supposedly neutral DNC favoring Clinton over Sanders in the presidential primaries.

Clinton campaign officials blamed the hack, which is now being investigated by the FBI, on Russian military intelligence agencies. The campaign also accused Moscow of trying to meddle in the U.S. election and help Trump, who has said he might not necessarily defend NATO allies if they are attacked by Russia.

"We don't have information right now about that, but what we have is a kind of bromance going on between Vladimir Putin and Trump which is distinct from this leak," Clinton adviser John Podesta said in an MSNBC interview.

Trump dismissed the suggestion in a tweet: "The joke in town is that Russia leaked the disastrous DNC emails, which should never have been written (stupid), because Putin likes me."

A cybersecurity firm the Democrats employed found traces of at least two sophisticated hacking groups on their network — both of which have ties to the Russian government. Those hackers took at least a year's worth of detailed chats, emails and research on Trump, according to a person knowledgeable of the breach who wasn't authorized to speak publicly about the matter.

Regardless of the origins of the hack, it was Wasserman Schultz who bore the brunt of the political fallout. Long a controversial figure, by Sunday afternoon she announced she would resign.

But the congresswoman had hoped to still fulfill her official duties in Philadelphia, taking the stage to gavel the convention in and out — scenarios that became untenable by midday Monday.

"I have decided that in the interest of making sure that we can start the Democratic convention on a high note that I am not going to gavel in the convention," she told a newspaper in her south Florida district, the Sun-Sentinel.

For Sanders' supporters, it was a high-profile victory. But it did little to temper their ongoing concerns about the woman at the top of the Democratic ticket.

"We are all scared of Donald Trump, but we also have misgivings about Hillary," said Bruce Fealk, a Sanders delegate from Michigan.