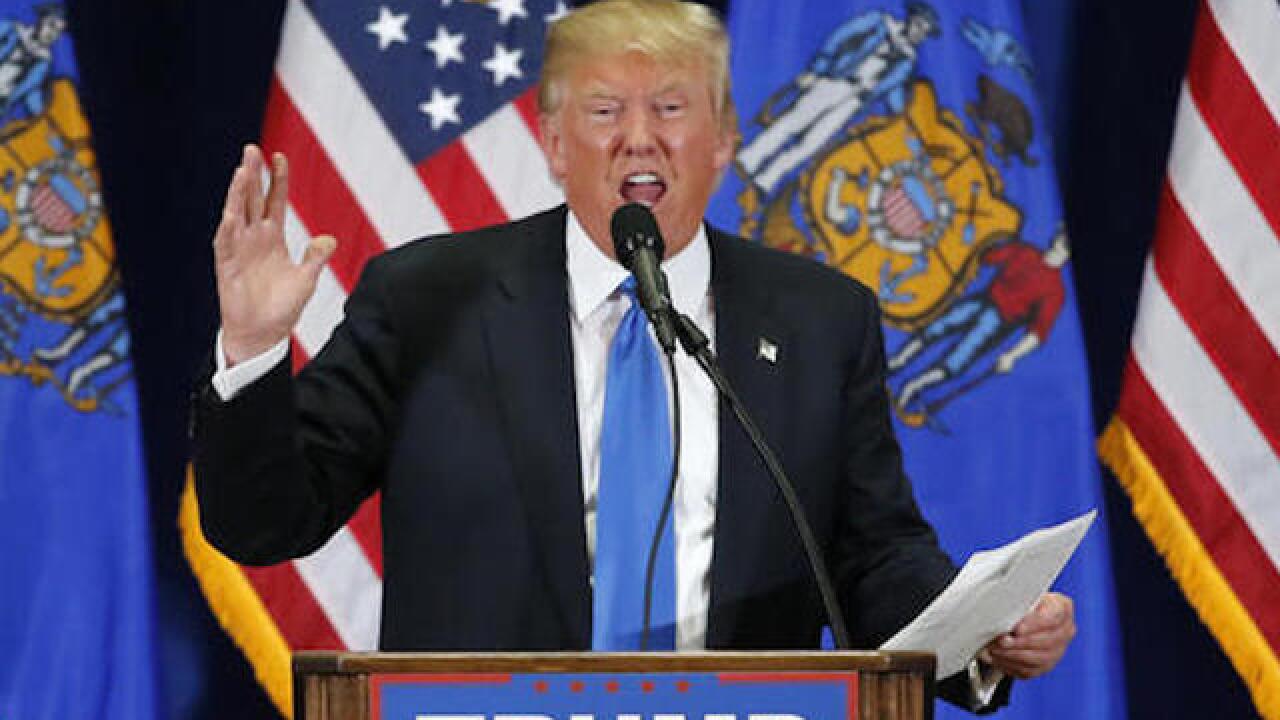 Both parties are turning their sights toward New York, which offers a massive delegate prize in its April 19 contests. It marks a homecoming of sorts for several candidates, with Trump, Clinton and Sanders all touting roots in the state.

Trump, who has dominated the Republican race for months, suddenly finds himself on the defensive as the campaign moves east. He's struggled through a series of missteps, including his campaign manager's legal issues after an altercation with a female reporter and his own awkward explanation of his position on abortion.

Exit polls in Wisconsin highlighted the deep worries about Trump surging through some corners of the Republican Party. A majority of GOP voters said they're either concerned about or scared of a potential Trump presidency, according to surveys conducted by Edison Research for The Associated Press and television networks.

Cruz has stepped forward as the candidate best positioned to block Trump, though it would likely take a convention battle to accomplish that goal. A Texas senator with a complicated relationship with Republican leaders, Cruz cast his Wisconsin victory as a "turning point" in the race and urged the party to rally around his candidacy.

"We've got the full spectrum of the Republican Party coming together and uniting behind this campaign," he said.

Trump was unbowed in his defeat. His campaign put out a biting statement accusing Cruz of being "worse than a puppet — he is a Trojan horse, being used by the party bosses attempting to steal the nomination from Mr. Trump."

The billionaire's campaign also suggested in the statement that Cruz is illegally coordinating with his own special interest group.

In response, Cruz' communications director Jason Miller said late Tuesday that "Donald Trump has a real problem when he gets his tail kicked, and that's exactly what happened tonight."

Sanders still trails Clinton in the pledged delegate count and has so far been unable to persuade superdelegates— the party officials who can back any candidate — to drop their allegiance to the former secretary of state and back his campaign.

At a raucous rally in Wyoming, Sanders cast his victory as a sign of mounting momentum for his campaign.

"With our victory tonight in Wisconsin, we have now won 7 out of 8 of the last caucuses and primaries," he declared.

With an overwhelming white electorate and liberal pockets of voters, Wisconsin was favorable territory for Sanders. In a sign of Clinton's low expectations in the Midwestern state, she spent Tuesday night at a fundraiser with top donors in New York City.

Clinton congratulated Sanders on Twitter and thanked her supporters in Wisconsin. "To all the voters and volunteers who poured your hearts into this campaign: Forward!" she wrote.

Sanders' win will net him a handful of additional delegates, but he'll still lag Clinton significantly. With 86 delegates at stake in Wisconsin, Sanders will pick up at least 45 and Clinton will gain at least 31.

That means Sanders must still win 67 percent of the remaining delegates and uncommitted superdelegates in order to win the Democratic nomination.

Clinton's campaign has cast her overall lead as nearly insurmountable. Yet Sanders' continued presence in the race has become an irritant for Clinton, keeping her from turning her attention to the general election.

In the Republican race, Cruz was poised to collect most of Wisconsin's 42 Republican delegates.

Trump still has a narrow path to claim the nomination by the end of the primaries on June 7. But by losing Wisconsin, the real estate mogul has little room for error in upcoming contests.

Complicating the primary landscape for both Cruz and Trump is the continuing candidacy of John Kasich. The Ohio governor's only victory has come in his home state, but he's still picking up delegates that would otherwise help Trump inch closer to the nomination or help Cruz catch up.

To win a prolonged convention fight, a candidate would need support from the individuals selected as delegates. The process of selecting those delegates is tedious, and will test the mettle of Trump's slim campaign operation.

Cruz prevailed in an early organizational test in North Dakota, scooping up endorsements from delegates who were selected at the party's state convention over the weekend. While all 28 go to the national convention as free agents, 10 said in interviews they were committed to Cruz. None has so far endorsed Trump.

Despite the concern among some Wisconsin Republicans about Trump becoming president, nearly 6 in 10 GOP voters there said the party should nominate the candidate with the most support in the primaries, which so far would be Trump. Even among voters who favored Cruz, 4 in 10 said the candidate with the most support going into the convention should be the party's nominee.