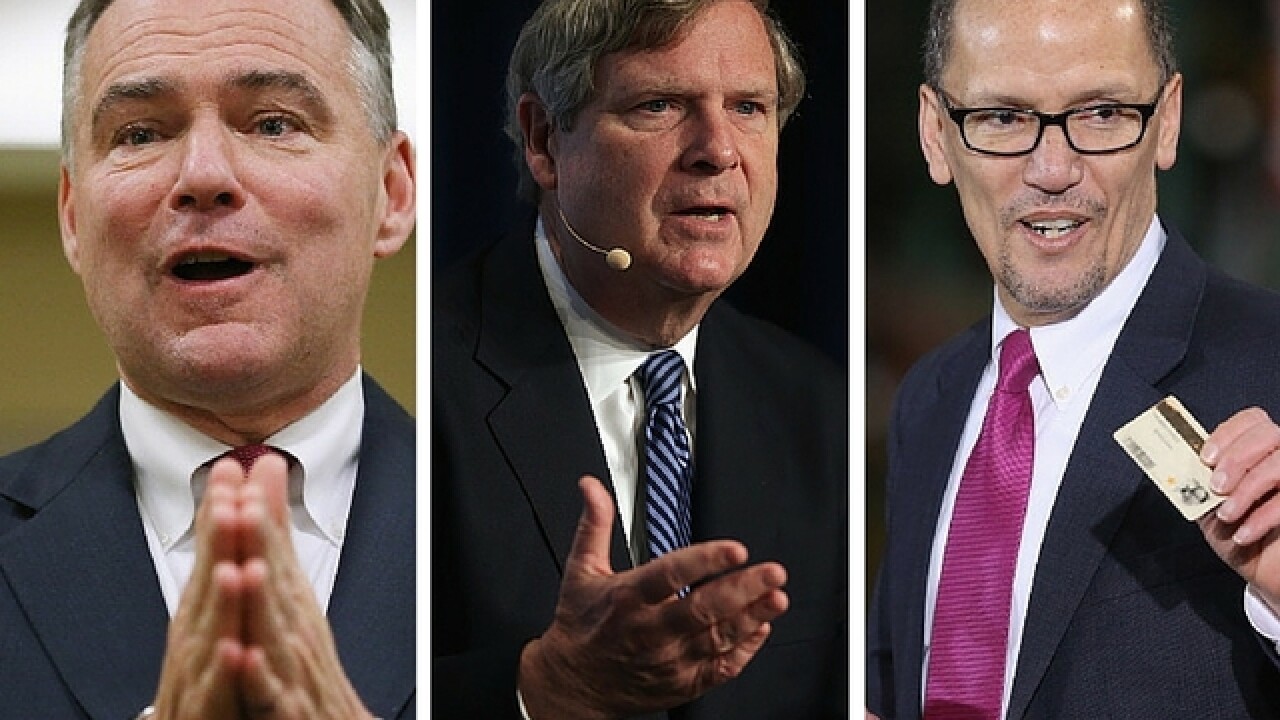 WASHINGTON (AP) — Hillary Clinton's vice presidential search is centering on three main contenders, with an announcement expected as soon as Friday as the Democrat prepares for her party's national convention next week in Philadelphia.

Democrats familiar with the search say Clinton's campaign has focused in recent days on Virginia Sen. Tim Kaine, a former governor, mayor and one-time Catholic missionary fluent in Spanish; Agriculture Secretary Tom Vilsack, an ex-Iowa governor and longtime Clinton ally; and Labor Secretary Tom Perez, a progressive champion who would be the first Hispanic on a major-party ticket.

The Democrats cautioned that Clinton had not yet reached a final decision and was weighing a number of factors, including the person's readiness to be president, personal compatibility and ability to help her administration govern.

Massachusetts Sen. Elizabeth Warren, a favorite of liberals, remains in the mix and offers the campaign a fundraising juggernaut and the tantalizing prospect of an all-female ticket. But Warren is not expected to be the final choice, said the Democrats familiar with the process. They spoke on condition of anonymity to describe private discussions about the search process.

Clinton's choice will be the culmination of a closely held search for a running mate, run by a small group of longtime advisers and confidantes.

Preparing for a showdown with Republican presidential nominee Donald Trump, Clinton has sought to project an inclusive campaign aimed at "breaking down barriers and building bridges" to mobilize the diverse coalition of voters who twice elected President Barack Obama.

Clinton is expected to announce her decision during a two-day campaign swing in Florida later this week. The vice presidential rollout could come at either a Friday rally at the state fairgrounds in Tampa or at a Saturday rally at Florida International University in Miami, where two-thirds of the student body is Hispanic.

Following next week's Democratic National Convention in Philadelphia, the newly minted ticket is expected to embark on a campaign bus tour, reminiscent of the "First 1,000 Miles" convoy that took Bill Clinton, Al Gore and their spouses across eight states after the party's 1992 convention.

Democrats familiar with the process said Trump's choice of Indiana Gov. Mike Pence, a conservative former congressman, for the GOP ticket was not viewed as requiring her to choose a specific running mate in response. Campaign officials declined to comment.

Kaine has been considered a leading contender for weeks based on his broad experience in Virginia, a presidential battleground state, as governor, senator and mayor of Richmond. He also served as chairman of the Democratic National Committee and as a lawyer working on fair housing and civil rights issues.

Vilsack, the longest-serving member of Obama's Cabinet, has known Clinton for many years — his late brother-in-law worked with her in the early 1970s — and she was among his most prominent surrogates in his come-from-behind gubernatorial victory in 1998.

Perez, meanwhile, is highly regarded by the White House for his policy chops and could potentially galvanize Latinos who have been turned off by Trump's harsh rhetoric about Hispanics. The son of immigrants from the Dominican Republic, Perez played a behind-the-scenes role as a federal prosecutor, a top aide to the late Sen. Ted Kennedy and the head of the Justice Department's civil rights division.

Both Vilsack and Kaine have been through the process before. Vilsack was among the final group considered by John Kerry in 2004 and Kaine was vetted by Obama's team four years later. If either Vilsack or Perez were selected, they would be required to resign from Obama's Cabinet.

Clinton's decision will be steeped in her personal experience. She was involved in her husband's selection of Gore in 1992 and has the unique vantage point of having seen up close the various roles played by the vice president.

In an interview this week with Charlie Rose of CBS News, Clinton said her main criterion was "would this person be a good president? You know, I am afflicted with the responsibility gene and I know what it's like being president."

Quizzed on potential running mates, Clinton noted that Kaine had "never lost an election" and was a "world-class mayor, governor and senator." She said Warren had "put the agenda of inequality front and center."