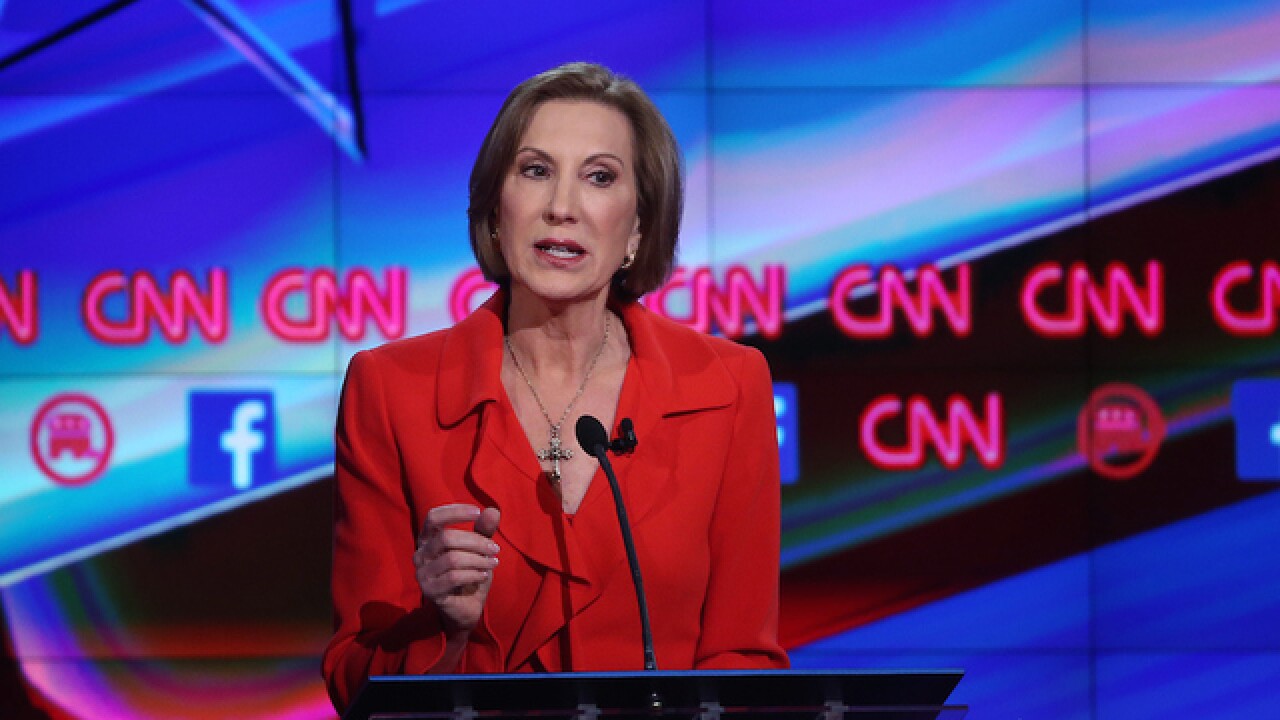 The Texas senator unveiled his pick for vice president Wednesday afternoon in Indianapolis.

The 61-year-old Fiorina, a former chief executive of Hewlett-Packard, has been a prominent Cruz ally since shortly after abandoning her own presidential bid earlier in the year. She was the only woman in the Republican Party's crowded 2016 field.

"Of all the people who didn't make it far in the race, she was one of the best about laying out her plan, talking about who she is and her accomplishments," said Doug De Groote, a fundraiser for Cruz based near Los Angeles.

It was an unusual move for a candidate who is far from becoming his party's presumptive nominee, but Cruz is desperate to generate momentum for his struggling campaign. The fiery conservative was soundly defeated by GOP front-runner Donald Trump in all five primaries contests on Tuesday, and he's been mathematically eliminated from winning the nomination before his party's national convention in July.

Some Cruz allies praised the selection of Fiorina, but privately questioned if it would change the trajectory of the race. Trump has won 77 percent of the delegates he needs to claim the nomination, and a win next week in Indiana will keep him on a firm path to do so.

Cruz was to appear Wednesday afternoon with Fiorina in Indiana's capital city, having staked his candidacy on a win in the state's primary contest next Tuesday. Fiorina's California ties could also give Cruz a big boost in that state's high-stakes primary on June 7.

"Carly has incredible appeal to so many people, especially in California," De Groote said. "She can really help him here."

Her first major foray into politics was in 2010, when she ran for Senate in California and lost to incumbent Sen. Barbara Boxer by 10 percentage points. She has never held elected office.

Trump criticized a Fiorina pick as "ridiculous" and "dumb" even before it was announced.

"First of all, he shouldn't be naming anybody because he doesn't even have a chance," the New York billionaire said in a Wednesday interview on Fox News.

"Naming Carly's dumb, because Carly didn't do well. She had one good debate — not against me by the way, because I had an unblemished record of victories during debates — but she had one victory on the smaller stage and that was it," Trump said.

He added, "She's a nice woman. I think that it's not going to help him at all."

Throughout her presidential bid, Fiorina emphasized her meteoric rise in the business world. A Stanford University graduate, she started her career as a secretary, earned an MBA and worked her way up at AT&T to become a senior executive at the telecom leader.

She was also dogged by questions about her record at Hewlett-Packard, where she was hired as CEO in 1999. She was fired six years later, after leading a major merger with Compaq and laying off 30,000 workers.

"The best way to describe that ticket is mean and meaner," said Sen. Barbara Boxer, D-Calif., who beat Fiorina for Senate in 2010. "He wants to throw people out of the country and she threw thousands of jobs out of the country. Perfect match."

In an Associated Press-GfK poll conducted in December 2015, Republican voters were more likely to say they had a favorable than an unfavorable view of Fiorina by a 47 percent to 20 percent margin, with 32 percent unable to give a rating.

Among all Americans, 45 percent didn't know enough about Fiorina to rate her, while 22 percent rated her favorably and 32 percent unfavorably.

Among all Americans, 59 percent had an unfavorable opinion of Cruz and 69 percent said that of Trump.