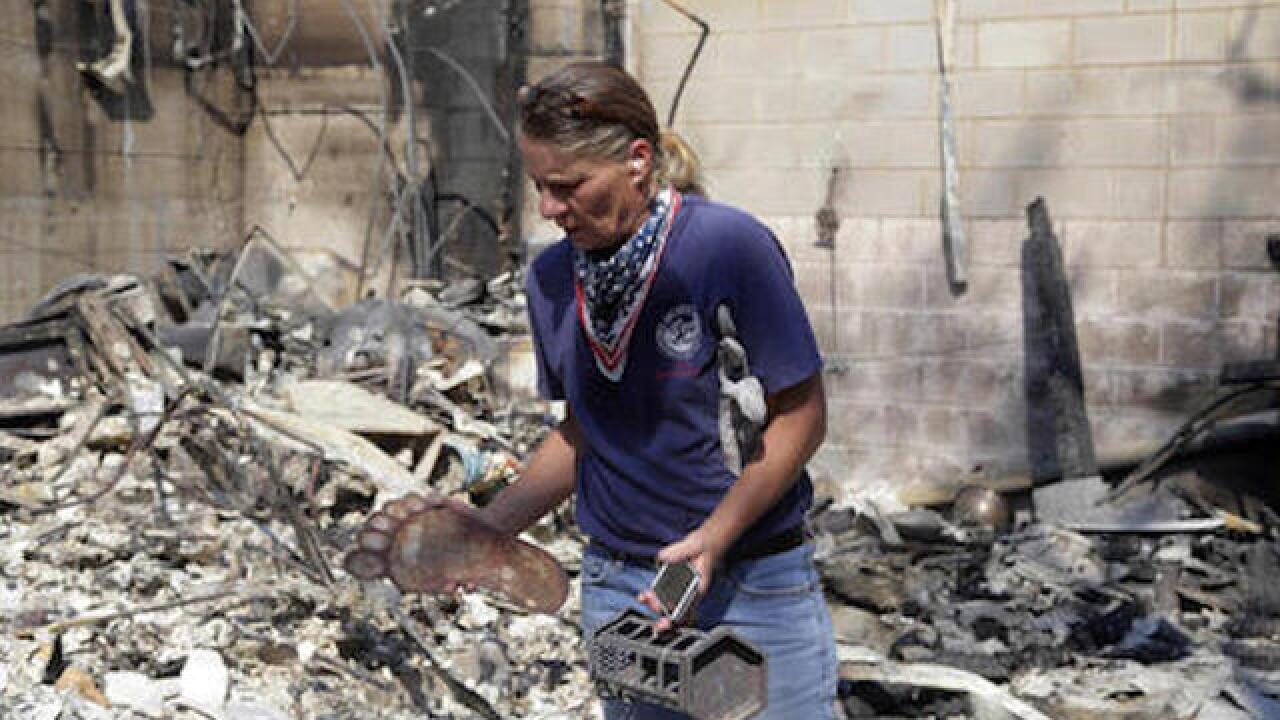 Copyright Associated Press
Nick Ut
<p>Karrie H. Andrews recovers items salvaged from the ruins of her home Tuesday, July 26, 2016, destroyed when the Sand fire swept through Santa Clarita, Calif. over the weekend. The fire destroyed 18 homes and authorities said that by Tuesday it had burned more than 37,000 acres, about 58 square miles. (AP Photo/Nick Ut)</p>

BIG SUR, Calif. (AP) — A wildfire was fouling the summer season on a beloved and scenic stretch of the California coast, where smoke and the threat of flames forced the closure of state parks near Big Sur.

The blaze that has destroyed 20 homes was burning inland over a ridge and was not for the most part visible on the Pacific Coast Highway, which remained open Wednesday, but with its signature views hard to see in the dark haze.

"We wanted to see more of the ocean," said Phoenix-area tourist Jim Newby, who drove along the highway with his family Tuesday. "We didn't see a whole lot of it unfortunately, and it's a beautiful, beautiful stretch."

The blaze could very easily crest the ridge and make a run toward some of the beloved campgrounds, lodges and redwoods nearer to the shore, officials said. At least 2,000 structures were threatened.

"It is folly to predict where this fire will go," California state parks spokesman Dennis Weber said.

To the south, firefighters made progress containing a huge blaze in mountains outside Los Angeles, allowing authorities to let most of 20,000 people evacuated over the weekend to return home. The Los Angeles-area fire has destroyed 18 homes since it started and authorities over the weekend discovered a burned body in a car identified Tuesday as a man who refused to be evacuated.

A woman living in the house Robert Bresnick was visiting left with firefighters, but he went back inside the house. The body of Bresnick, 67, was found about 20 minutes later Saturday in the car after flames tore through the neighborhood, Los Angeles County Coroner's Assistant Ed Winters said.

The Big Sur closures were put into place for parks that draw 7,500 visitors daily from around the world for their dramatic vistas of ocean and mountains.

The park shutdowns came as a fire that started Friday just north of Big Sur grew Tuesday to nearly 37 square miles (94 square kilometers) but was just 10 percent contained. Twenty homes have burned in the zone, residents of 300 more were ordered to evacuate and more than 2,000 firefighters were trying to douse the blaze.

In Southern California, the fire in rugged wilderness between the northern edge of Los Angeles and the suburban city of Santa Clarita grew slightly to nearly 60 square miles (154 square kilometers). It was 40 percent contained.

Acting Gov. Tom Torlakson, substituting for Gov. Jerry Brown who is at the Democratic National Convention with other top state officials, declared a state of emergency for both fires on Tuesday night. The move frees up funding and relaxes regulations to help with the firefight and recovery.

The 3,000 firefighters in Los Angeles County faced another day of temperatures in the 90s to low 100s as they fought the fire, aided by fleets aircraft dropping retardant and water and hundreds of fire engines.

Meanwhile in Wyoming, a large backcountry wildfire in the Shoshone National Forest put about 290 homes and guest ranches at risk. It burned nearly 11 square miles (28 square kilometers) and forced the evacuations of 900 people, but no homes had burned by Tuesday, authorities said.