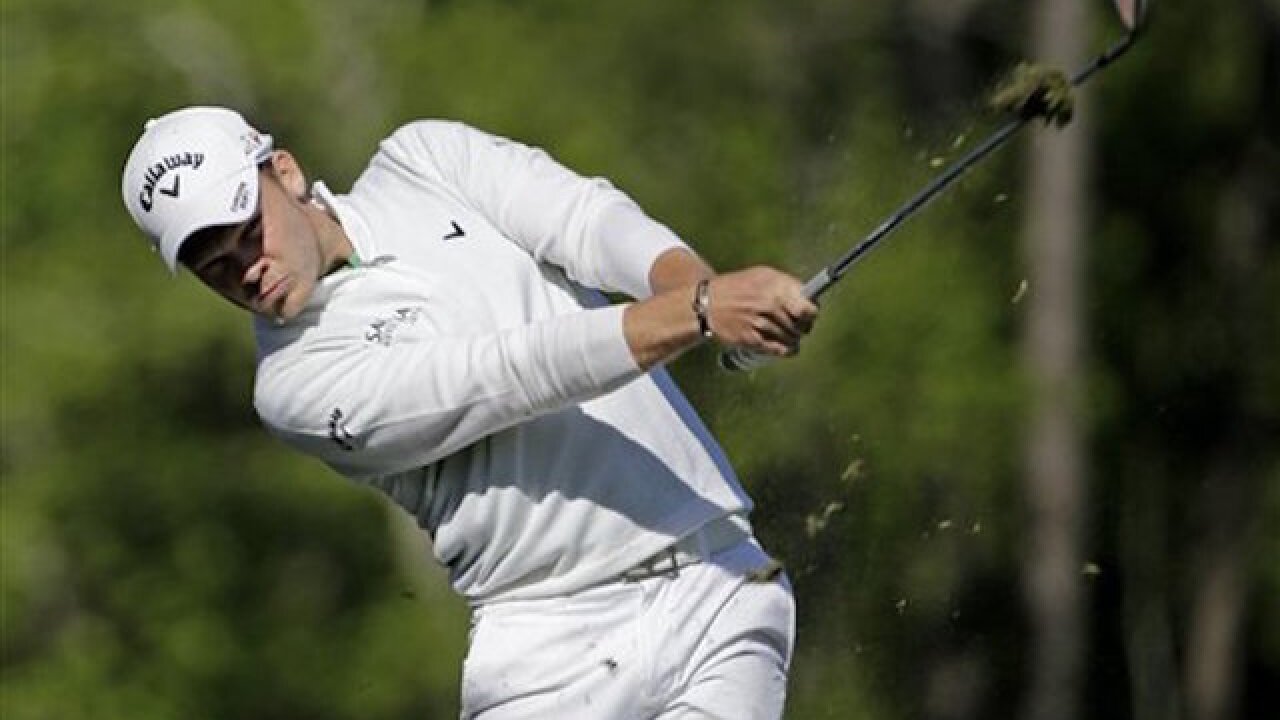 David J. Phillip
<p>Danny Willett, of England, tees off on the 12th hole during the final round of the Masters golf tournament Sunday, April 10, 2016, in Augusta, Ga. (AP Photo/David J. Phillip)</p>

By: Associated Press
Posted at 7:17 PM, Apr 10, 2016
AUGUSTA, Ga. (AP) — Jordan Spieth couldn't bear to watch, turning his head before another shot splashed into Rae's Creek. Moments later, Danny Willett looked up at the large leaderboard at the 15th green and couldn't believe what he saw.
This Masters turned into a shocker Sunday, right down to the green jacket ceremony.
Spieth was in Butler Cabin, just like everyone expected when he took a five-shot lead to the back nine at Augusta National. Only he was there to present it to Willett, who seized on Spieth's collapse with a magnificent round that made him a Masters champion.
"You dream about these kind of days and things like that, but for them to happen ... it's still mind-boggling," Willett said.
It was a nightmare for Spieth, especially the par-3 12th hole. Clinging to a one-shot lead, he put two shots into the water and made a quadruple-bogey 7, falling three shots behind and never catching up. Instead of making history with another wire-to-wire victory, he joined a sad list of players who threw the Masters away.
"Big picture? This one will hurt," Spieth said.
It was a comeback that ranks among the most unlikely in the 80 years of the Masters on so many levels.
Willett wasn't even sure he would play this year because his wife was due — on Sunday, no less — with their first child. She gave birth to Zachariah James on March 30, sending him on his amazing journey to his first major.
"We talk about fate, talk about everything else that goes with it," Willett said. "It's just a crazy, crazy week."
He became the first player from England in a green jacket since Nick Faldo in 1996, and the parallels are bizarre. Faldo shot a bogey-free 67 and overcame a six-shot deficit when Greg Norman collapsed around Amen Corner. Willett also closed with a 5-under 67, with no bogeys on his card, to match the best score of the weekend.
The most compelling images came from the guy who suffered.
Coming off two straight bogeys to start the back nine, Spieth still had the lead when he went at the flag with ha 9-iron on the par-3 12th and saw it bounce off the slope into the water. From the drop zone, he hit a wedge so fat that he turned his head and removed his cap, not wanting to look. He got up-and-down from the back bunker, and suddenly faced a three-shot deficit.
"I actually heard everyone grunting and moaning or whatever they do to the scoreboard when the scores go up," Willett said. "He obviously had a terrible run, which basically put it right back in anyone's hands. And fortunately enough, I was able to seize the opportunities."
He finished at 5-under 283 for a three-shot victory over Spieth and Lee Westwood (69).
Spieth was trying to become only the fourth back-to-back winner of the Masters, and the first player in 156 years of championship golf to go wire-to-wire in successive years in a major. And it looked inevitable when he ran off four straight birdies to end the front nine and build a five-shot lead.
This didn't look like one of those Masters that would start on the back nine Sunday.
But it did — quickly.
Spieth made bogey from the bunker on No. 10. A tee shot into the trees on the 11th, missing an 8-foot par putt. He still had a two-shot lead and only needed to get past the dangerous par-3 12th to settle himself, especially with two par 5s in front of him. But he couldn't. Not even close.
"It was a lack of discipline to hit it over the bunker coming off two bogeys, instead of recognizing I was still leading the Masters," Spieth said.
The turnaround left him dazed.
Spieth was five shots ahead on the 10th tee and three shots behind when he walked to the 13th tee.
"It was a really tough 30 minutes for me that hopefully I never experience again," Spieth said.
Willett poured it on with a shot into the 14th to about 4 feet, and a tee shot on the par-3 16th to 7 feet for a birdie that stretched his lead. Spieth still had a chance when he birdied both par 5s to get within two shots, and then hit his tee shot to 8 feet behind the hole on the 16th. But he missed the birdie putt, and when he hit into a bunker and failed to save par on the 17th, it was over.
Spieth had led after seven straight rounds at the Masters, a streak that ended in a most cruel fashion. He shot 41 on the back nine for a 73, and was runner-up for the second time in three years.
Westwood, playing with Willett, made eagle on the 15th hole to get within one shot of the lead, and then three-putted the 16th hole to fall away.
Dustin Johnson also had an outside chance, even after four putts for a double bogey on the fifth hole. He missed eagle putts from 15 feet and 20 feet on the par 5s on the back nine, and then took double bogey on the 17th. Johnson closed with a 71 and tied for fourth with Paul Casey (67) and J.B. Holmes (68).
Smylie Kaufman, one shot out of the lead in his Masters debut, closed with an 81.
Willett moves to No. 9 in the world. He returns home to England with a gift like no other for his infant son.
"People were saying, 'Try to bring the jacket home for little man.' I think it's a little bit big," Willet said. "But I'm sure in a few years' time he'll grow into it."
Associated Press 2016