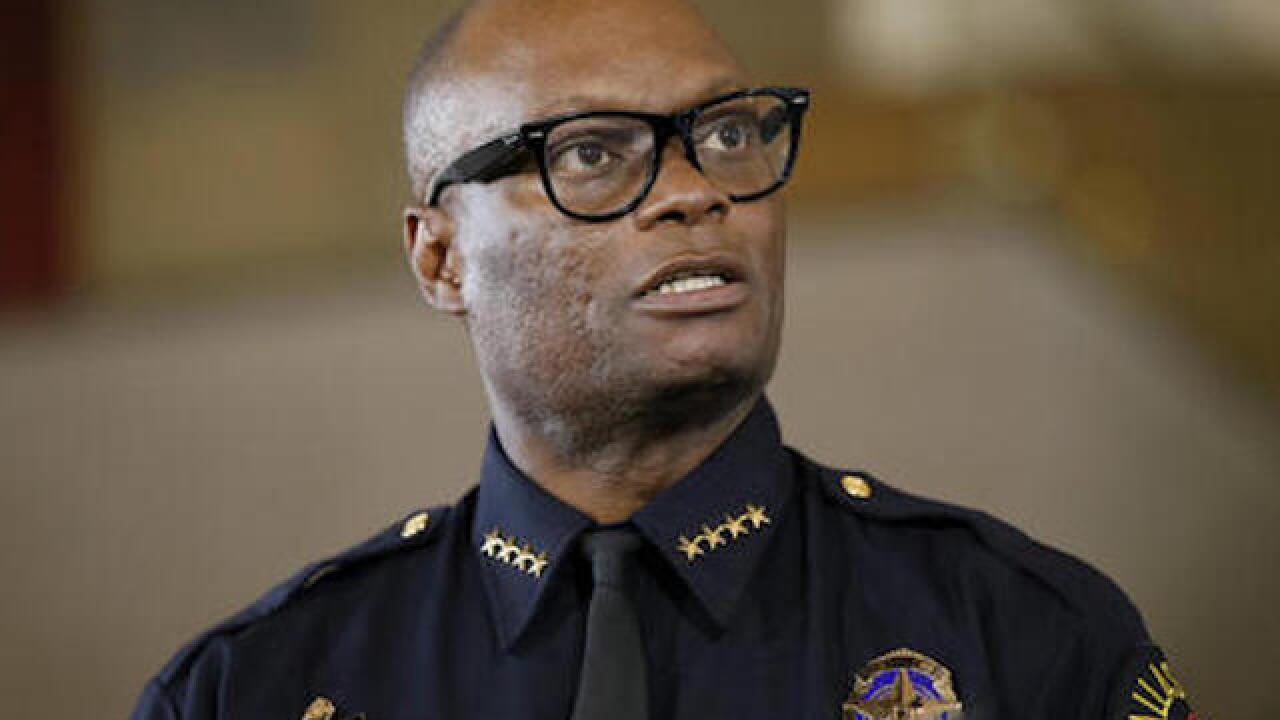 Copyright Associated Press
Tony Gutierrez
<p>FILE - In this June 15, 2015 file photo, Dallas Police Chief David Brown briefs the media about a shooting at Dallas Police headquarters in Dallas. Brown, who's drawn criticism amid plummeting morale among officers and widespread praise for his response to the July sniper attack that killed five officers, has announced his retirement. Brown issued a statement Thursday, Sept. 1, 2016, saying he will retire Oct. 22 after 33 years with Dallas police. (AP Photo/Tony Gutierrez, File)</p>

DALLAS (AP) — Dallas police Chief David Brown announced his retirement Thursday, two months after his impassioned response to a sniper attack that killed five officers made him the face of a city reeling from tragedy.

Brown, who will be 56 this year, issued a statement saying he will retire Oct. 22 after 33 years with Dallas police and six years as chief. He did not give a reason for his decision to retire, but the mayor and city manager both said at a news conference that he was not being forced out.

"I became a Dallas cop in 1983 because of the crack cocaine epidemic's impact on my neighborhood," Brown said in the statement. "I wanted to be part of the solution. Since that time I have taken great pride in knowing that we have always been part of the solution and helped to make Dallas the world class city it is today."

Arguably his defining moment leading a department of more than 3,600 officers was his response to the July 7 fatal shootings of four Dallas officers and one transit officer as a downtown protest against police brutality was ending. But he also drew criticism during his tenure as he clashed with police union leaders and others over how to deal with a surge in violent crime earlier this year that reversed a decade-long decrease in killings.

Brown, who is black, drew broad praise from President Barack Obama and others for his leadership in the days after the shootings by a black Army veteran who said he was motivated by revenge in the wake of police shootings elsewhere that killed or injured black men. The gunman was killed when police deployed a bomb-carrying robot.

At a memorial service for the slain Dallas officers, Brown spent part of his time reciting Stevie Wonder's "I'll Be Loving You Always" to express his affection for his officers. His call for those who were protesting mistreatment of black people to join the police ranks prompted a surge in applications, although information about who those applicants are has not been released.

Yet Brown also experienced friction with rank-and-file officers during his time as police chief. Earlier this year, he sought to reassign hundreds of officers to target high-crime neighborhoods and bulk up staffing on the 4 p.m. to midnight shift, but the plan provoked intense backlash and he backed away from implementing it. At least one police union called for his resignation amid the turmoil.

Brown also had drawn criticism from unions for not doing enough to retain many officers who have left for better pay elsewhere.

Protesters who organized the July demonstration also clashed with Brown after he demanded they stop holding marches downtown.

Mayor Mike Rawlings said during a news conference Thursday that Brown was "leaving on his own terms." Rawlings said the announcement didn't come as a surprise because Brown had told him and other leaders several months ago that he had begun thinking about his retirement and because six years as the chief of a metropolitan police force is an "eternity."

But less than two months ago, as Brown addressed the media hours after four of his officers were killed and four others were wounded by the sniper, he hardly sounded like a man ready to leave his job. Brown talked about his love for his city and the support he felt from its leaders.

Brown was not available for comment Thursday. Rawlings said he was in Austin with family, playing golf. Brown's statement announcing his retirement said he would hold a media availability when he returned on Sept. 8.

Asked whether they could confirm Brown was not being forced to leave, both Rawlings and City Manager A.C. Gonzalez said, "I can." Rawlings also credited Brown with transforming the department by reducing the number of officer-involved shootings and implementing other measures.

"David Brown is a straight-forward man; he's a man of integrity and courage," Rawlings said.

Brown was the longest-serving police chief in Dallas in recent decades, Rawlings said. He noted the job is challenging because of the pressure that comes with it and its "highly political" demands.

Executive Assistant Chief David Pughes will serve as interim chief upon Brown's departure. Gonzalez, who plans to retire in January, has said the new city manager will find a replacement for Brown.

Rawlings praised the chief for pushing for greater transparency, but authorities since the sniper attack have refused public records requests for police reports, 911 calls, audio and video recordings, autopsy documents, crime scene photos and other materials.

Brown told the City Council last month that much of the information about the attack could be withheld for an indefinite period during an investigation into whether the use of force was justified.