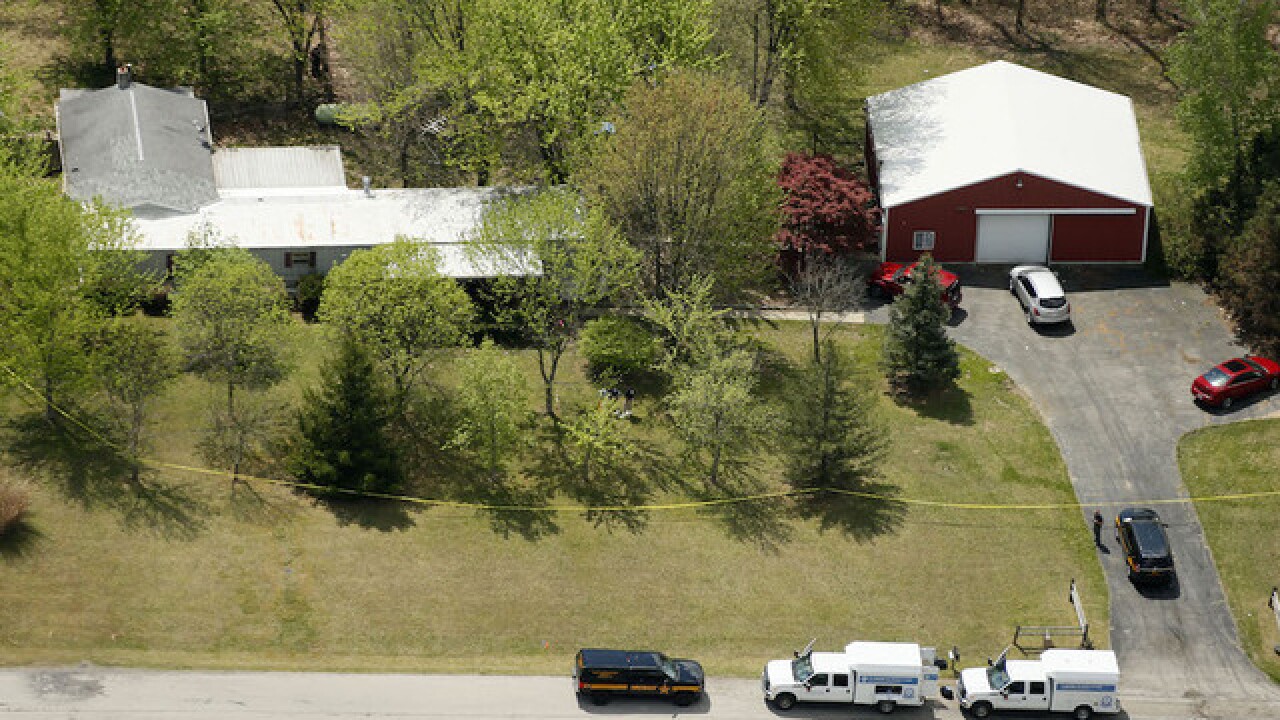 Lisa Marie Miller
<p>This aerial photo shows one of the locations being investigated in Pike County, Ohio, as part of an ongoing homicide investigation, Friday, April 22, 2016. Several people were found dead Friday at multiple crime scenes in rural Ohio, and at least most of them were shot to death, authorities said. No arrests had been announced, and it's unclear if the killer or killers are among the dead.</p>

COLUMBUS, Ohio (AP) — The father of one of the eight people slain in southern Ohio said that he knew nothing about marijuana-growing operations at three of the four crime scenes and that he found it odd that the killer or killers were able to get past his daughter's dogs.

Leonard Manley, father of 37-year-old Dana Rhoden, first learned of the marijuana from news reports, he told the Cincinnati Enquirer on Monday.

Manley, 64, said he's sure his daughter couldn't have been involved in anything illegal.

"They are trying to drag my daughter through the mud, and I don't appreciate that," said Manley, whose three grandchildren — Dana's children — were also among the dead.

Manley also noted that the assailant was able to get by his daughter's two dogs.

"Whoever done it knows the family," Manley said. "There were two dogs there that would eat you up."

All eight victims were found fatally shot in the head on Friday in Pike County, an economically distressed area in the Appalachian Mountain region that's roughly 80 miles east of Cincinnati. All were members of the Rhoden family.

No arrests have been made, and officials have not said if they have any suspects in mind.

"It wasn't just somebody sitting pots in the window," Junk said.

Attorney General Mike DeWine said there was also possible evidence of cockfighting at one of the properties, but he didn't know what was relevant to the investigation.

Law enforcement officials had been familiar with the family only for other reasons, Junk told the Dispatch.

"Altercations with people, that sort of thing," he said. "Nothing like this."

Two of the four homes that became crime scenes are within walking distance of each other. The others are nearby.

More than a dozen counselors, clergy and psychologists arrived at the local high school on Monday to help friends and neighbors cope with their grief as they remembered the victims as loyal and caring people.

The youngest victim, Christopher Rhoden Jr., was a freshman at Piketon High School.

Hanna and Frankie Rhoden also also had attended the school.

While authorities have not released any details about a motive, the attorney general's office did confirm Monday that one of the victims had received a threat via Facebook. Authorities didn't elaborate.

DeWine also said that the state's crime lab was looking at 18 pieces of evidence from a DNA and ballistic standpoint and that five search warrants were executed. More than 100 tips were given to investigators, and a Cincinnati-area businessman offered a $25,000 reward for details leading to those responsible.