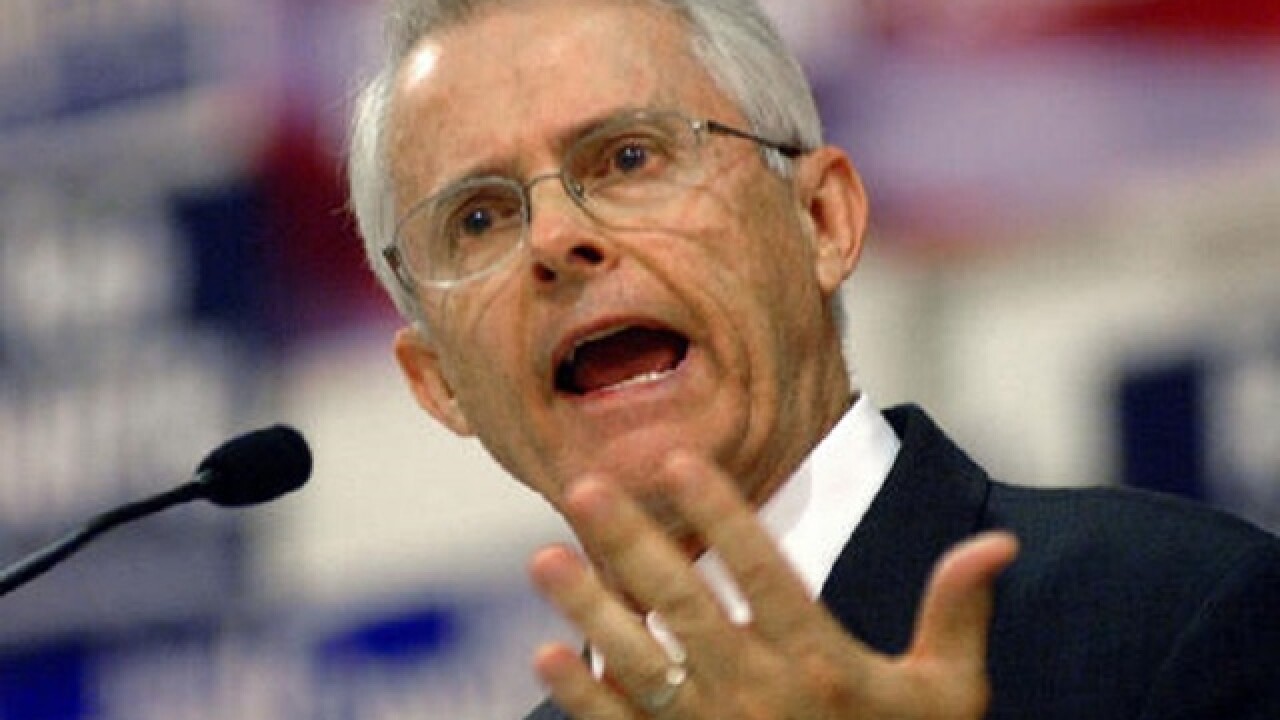 RICHMOND, Va. (AP) — Sen. Ted Cruz's former campaign co-chairman in Virginia has traveled to Syria and promised support for the government of President Bashar Assad, who U.S. officials have repeatedly said has lost the legitimacy to rule the war-torn country.
Virginia state Sen. Dick Black's trip to a Middle Eastern country in the midst of a civil war and his comments in the face of official U.S. foreign policy are highly unusual for a state lawmaker.
Black, an outspoken Republican, is a part-time state senator who has no role in official U.S. foreign policy. Still, he has met with Assad government officials and said he would advocate for better relationships between Assad and the U.S., according to the official Syrian news agency.
"I will be Syria's voice," Black said, according to the news agency.
An aide to Black said Wednesday evening that Black resigned as co-chair of the Cruz campaign in Virginia shortly before his trip. In a resignation letter dated April 21 the aide provided to The Associated Press, Black said he was resigning to "avoid any possible distraction" related to his trip.
In the letter, Black said he was traveling to Syria "in an attempt to restore peace and prevent the slaughter of Christians and other minorities at the hands of the armies of terrorists rampaging across the country."
Black has been strong advocate for Cruz and was recently elected to serve as a Cruz-supporting Virginia delegate at the Republican National Committee's convention this summer.
Unlike his GOP rivals, Cruz has been less than eager to use military force to take out the Assad government.
"If we are to defeat our enemies we need to be clear-eyed that toppling a government and allowing radical Islamic terrorists to take over a nation is not benefiting our national security interests," Cruz said at the Republican Jewish Coalition forum in December, referring to President Barack Obama's Syria policy goals. "Putting ISIS or Al Qaeda or the Muslim Brotherhood in charge of yet another state in the Middle East is not benefiting our national security."
The Cruz campaign did not immediately respond to requests for comment about Black's trip to Syria.
Black is one of the most vocal social conservatives in Virginia's General Assembly, and has drawn national attention for his opposition to abortion and gay rights. The former Vietnam War veteran and military lawyer dismayed Republican leaders in 2003 by sending fellow lawmakers small, plastic likenesses of a fetus to underscore his opposition toward abortion.
The state senator raised eyebrows in 2014 when he sent a letter to Assad praising him. It was posted on the Syrian president's Facebook page.
Black is expected to meet with Assad during his visit, the Syrian newspaper Al-Watan reported.
Syria's conflict began with mostly peaceful protests in 2011, but a brutal government crackdown and the rise of an armed insurgency eventually plunged the country into a full-blown civil war. The fighting has killed more than 250,000 people, according to the United Nations, which stopped tracking casualties several months ago.
Last year, Black said the Virginia Capitol Police alerted him to a threat against him by the Islamic State for his support of Assad. The state senator was featured in a magazine published by the Islamic state.
Black posted a link on Twitter on Wednesday to article written by an Iranian state-run TV news agency, which quoted Black as saying the Syrian civil war would "come to an end if the U.S. stops training terrorist in Jordan, Saudi Arabia" and other countries.
U.S. State Department spokesman Mark Toner said Black "is entitled to his views, but they do not reflect this administration's policy on Syria."
Black met with a Lebanese Christian politician allied with the Lebanese militant Hezbollah group, which is fighting alongside Assad's forces in Syria, the TV news agency reported.
Both the Iranian state-run TV news agency and the official Syrian news agency erroneously referred to Black as a U.S. senator.
Word of Black's travels drew mockery from political opponents.
"Doesn't surprise me one bit," said Virginia Senate Minority Leader Dick Saslaw. He added that Black shouldn't be trying to meddle in foreign affairs and said Republicans "would be raising holy hell if the situation was reversed."
Associated Press 2016