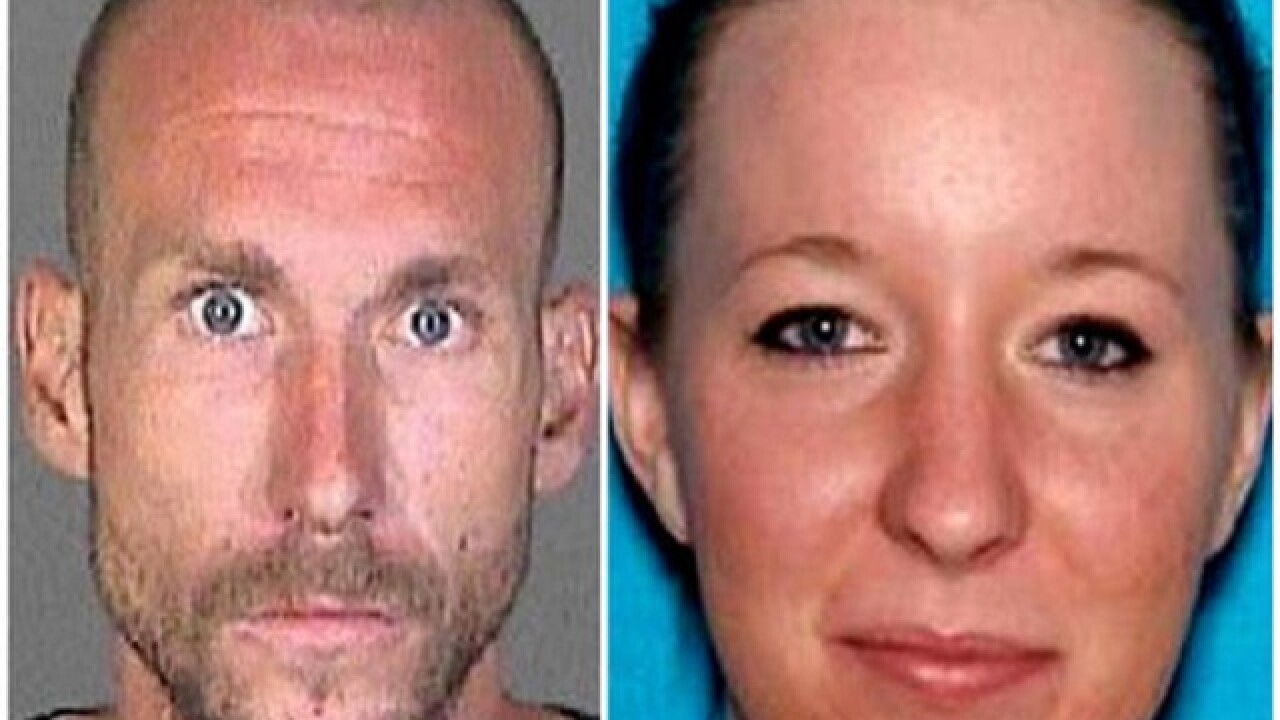 <p>ADDS NAMES OF VICTIMS - This photo combination provided by the Los Angeles County Sheriff's Department shows Joshua Robertson and Brittany Humphrey, who authorities are seeking in connection with the killing of Kimberly Harvill and kidnapping of her three small children. Authorities say the couple may have left California with the children, Rylee Watkins, 5, Brayden Watkins, 3, and Joslynn Watkins, 2. (Los Angeles County Sheriff's Department via AP)</p>

By: Associated Press
Posted at 8:54 PM, Aug 25, 2016
LOS ANGELES (AP) — A California couple wanted in connection with a woman's killing and the kidnapping of her three children in the Los Angeles area were arrested Thursday in Colorado.
Joshua Aaron Robertson, 27, and Brittany Humphrey, 22, were arrested without incident in Pueblo, about 40 miles south of Colorado Springs, according to the Los Angeles County Sheriff's Department.
The couple was wanted in connection with the death of Humphrey's half-sister, Kimberly Harvill, whose body was found with multiple gunshot wounds along a road in a remote area of Los Angeles County on Aug. 14.
Investigators said the couple kidnapped Harvill's three young children, who were found safe Wednesday in a motel on the outskirts of Albuquerque.
Humphrey is Harvill's half-sister, and therefore the children's aunt.
Humphrey and Robertson, who authorities had said should be considered armed and dangerous, were found after officers from the Pueblo Police Department were conducting an unrelated investigation at a local motel where they were staying, the sheriff's department said.
Humphrey was found inside a car at the motel, while Robertson was found about two blocks away. The baby girl, who is Robertson's, was unharmed and was in state custody.
Lt. Joe Mendoza said he didn't know whether Robertson or Humphrey made any statements or had a gun with them but that his detectives will be interviewing them in the next few days.
Harvill and her children had most recently lived in Fresno and were transitory, moving from motel to motel, sheriff's Capt. Steve Katz said Wednesday, adding that they depended on panhandling to survive.
Investigators believe Harvill was killed within 24 hours of being found, though it's unclear where the killing took place.
Harvill was involved with methamphetamine, as were Humphrey and Robertson, Katz said.
Humphrey and Robertson were living in Lebec, the unincorporated area of Los Angeles County where Harvill was recently staying with her children and where she was killed, Mendoza said.
It appears that Harvill and her children had been staying with Humphrey and Robertson, he said.
Investigators know of no ongoing conflict between the sisters, Mendoza said.
An arrest warrant for kidnapping was issued for the couple. Investigators say the couple were considered persons of interest in Harvill's death.
"Due to the fact that immediately after the murder or sometime shortly after, it is suspicious that they did not come forward to law enforcement and instead they fled eastbound towards other states," Mendoza said.
The father of Harvill's children, Kenneth Chad Watkins, killed himself by lying in front of a train last year, according to the Fresno County Coroner.
Harvill's Facebook page shows a photo of her with Humphrey and a man who resembles Robertson two days before her body was found.
Harvill's children were in the process of being returned to California, where authorities said it would be determined whether they would be placed with relatives or in state care.
Copyright 2016 The Associated Press. All rights reserved. This material may not be published, broadcast, rewritten or redistributed.