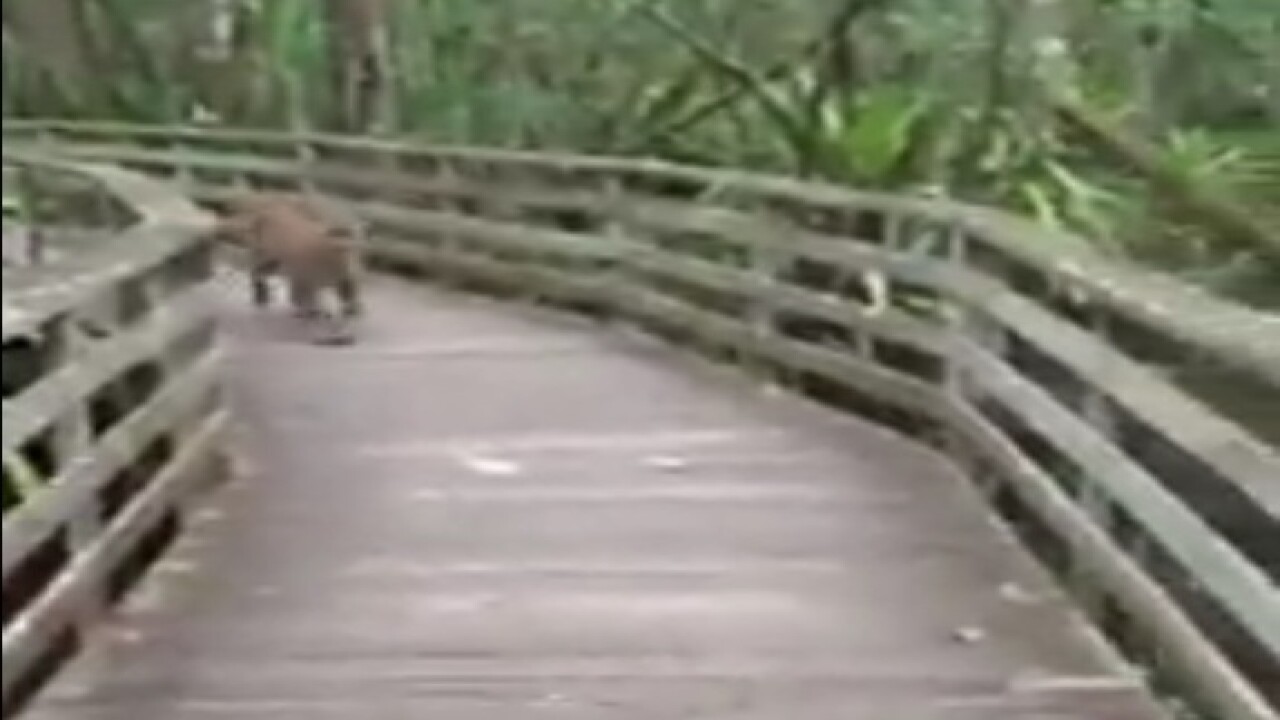 Visitors to the Corkscrew Swamp and Preserve outside of Naples, Florida usually visit for a peaceful walk down the boardwalk.  But one recent visitor got more than she expected.

Her viral video has a lot of people hitting the share button on social media and the nature trails too.

Two Wisconsin women, Tina Dorschel and Andrea Wippenfurth were taking a morning walk at Corkscrew Swamp Sanctuary when they caught that panther on their cell phone.

The video had visitors to the sanctuary talking Wednesday.

"We saw the panther it was like all online and stuff. We knew that it was in Corkscrew and we wanted to come and see the wildlife," said Michael Parado, who saw the video on Reddit.

Parado and his friend Mary Ngo weren't the only ones venturing the trails. Everyone at the preserve wanted to catch a glimpse of the prancing panther.

"Wow, wow. Yeah, I mean that's a good long look at it," said Steve Najemy after he watched the video for the first time.

Najemy was visiting Florida from Massachusetts. He wanted another look and hit the play button one more time. He couldn't get over how close the big cat came.

"People were right on this boardwalk and walked past him, so it was like within you know, could've brushed right by him," he said.

The people at the preserve a little green with envy. "I wish it was me. yeah that would be a once in a lifetime experience for sure," said Najemy.

"We wanted to see the panther run by us too, it would've been cool," said Mary Ngo.

But Sanctuary Director Jason Lauritsen thinks visitors to the preserve might need to make a few more trips there.

"The reality is this is a wild place and these cats are here every day. but you can't expect to see one.  This lady won the wildlife lottery with the footage she saw," said Lauritsen.

He's thinking this might cause a spike in the number of people who will be visiting. "Who doesn't love panthers? This is really cool. I figured as soon as I saw it this is gonna be a popular image to replay for folks.  I've watched it probably ten times myself already," he said.

The woman swore at the end of the viral video. People at the park shared their thoughts on what they would've
"I would've said the exact same words," said Najemy.

"I'd be chilling there saying 'oh my God, oh my God," said Parado.

Director Lauritsen feels like it was a very human reaction. "She's from Wisconsin; this doesn't happen every day up there."