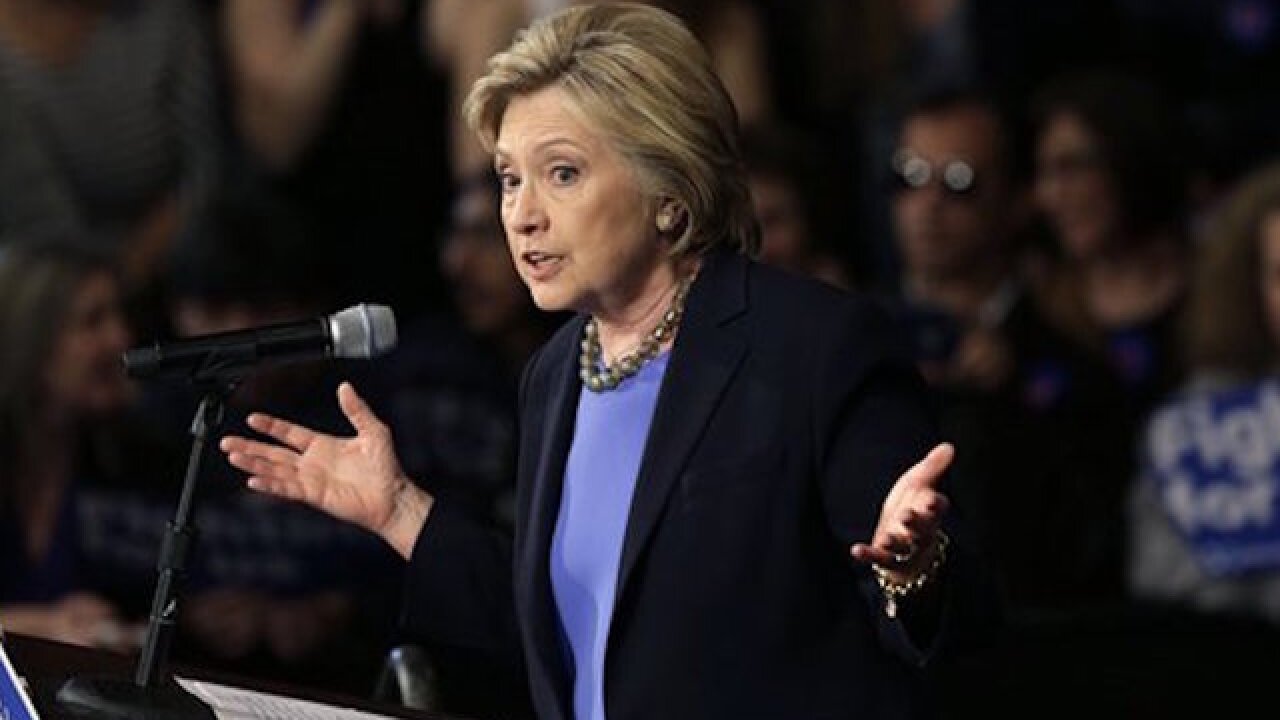 By: Associated Press
Posted at 4:12 AM, Apr 04, 2016
SYRACUSE, N.Y. (AP) — Hillary Clinton snapped at a Greenpeace protester. She linked Bernie Sanders and tea party Republicans. And she bristled with anger when nearly two dozen Sanders supporters marched out of an event near her home outside New York City, shouting "if she wins, we lose."
"They don't want to listen to anyone else," she shot back. "We actually have to do something. Not just complain about what is happening."
After a year of campaigning, months of debates and 35 primary elections in the Democratic presidential race, Sanders is finally getting under Clinton's skin.
RCP Poll Average for Democratic Presidential Nomination | InsideGov
Clinton has spent weeks largely ignoring Sanders and trying to focus on Republican front-runner Donald Trump. Now, after several primary losses and with a tough fight in New York on the horizon, Clinton is showing flashes of frustration with the Vermont senator — irritation that could undermine her efforts to unite the party around her candidacy.
According to Democrats close to Hillary and former President Bill Clinton, both are frustrated by Sanders' ability to cast himself as above politics-as-usual even while firing off what they consider to be misleading attacks. The Clintons are even more annoyed that Sanders' approach seems to be rallying — and keeping — young voters by his side.
While Hillary Clinton's team contends her lock on the nomination is "nearly insurmountable," the campaign frequently grumbles that Sanders hasn't faced the same level of scrutiny as the former secretary of state, New York senator and first lady. Her aides complain about Sanders' rhetoric, claiming he's broken his pledge to avoid character attacks by going after her paid speeches and ties to Wall Street. They also point to scenes of Sanders supporters booing Clinton's name at his rallies.
Actress Rosario Dawson's 15-minute speech at a New York City rally on Thursday, in which she rallied the crowd by crying "shame on you, Hillary" and noted that Clinton could soon face an FBI interview over the email controversy while at the State Department, underscored the growing tensions between the campaigns.
Over the weekend, the bickering was about a possible debate before the New York primary April 19. Clinton's campaign accused Sanders' of playing "political games" by rejecting three specific dates; Sanders' team volunteered dates the Clinton campaign says are unworkable.
Clinton hopes big victories in New York and five Northeastern states a week later will allow her to wrap up the nomination by the end of the month.
But aides acknowledge that Sanders, who's raised $109 million this year and has pledged to take his campaign to the party convention in July, is unlikely to feel significant political or financial pressure to drop out of the race, even if it becomes clear he cannot win the nomination.
Clinton stayed in the 2008 contest against Barack Obama until the bitter end, though her initial advantage with superdelegates, who later flipped to the Illinois senator, gave her a stronger case for the nomination.
Unlike eight years ago, when California Sen. Dianne Feinstein brought Clinton and Obama together for a meeting, few Democrats are in position to broker peace between Clinton and Sanders. For most of his political career, Sanders identified as an independent — not a Democrat — leaving him with far weaker ties to party powerbrokers.
According to an Associated Press analysis, Sanders must win 67 percent of the remaining delegates and uncommitted superdelegates — party leaders and officials who can support any candidate — through June to be able to clinch the Democratic nomination. So far he's only winning 37 percent.
Joel Benenson, Clinton's chief strategist, said: "We're going to get to a point at the end of April where there just isn't enough real estate for him to overcome the lead that we've built."
Still, any kind of truce is probably weeks, if not months, away.
For now, Sanders is costing Clinton significant time, money and political capital. His victories in recent Western caucuses underscored her weaknesses among younger and white working-class voters, important elements of the Democratic coalition. He's favored in the Wisconsin primary Tuesday.
Sanders is drawing sizable crowds in New York, attracting 18,500 to a rally in the South Bronx on Thursday. A victory in that state, which Clinton represented for two terms in the Senate, would deal a significant psychological blow to her campaign, rattling Democrats already worried about her high national disapproval ratings.
Clinton is more reliant on traditional fundraising than Sanders, who's raised the bulk of his money online. Even as she prepares for New York's primary, she has scheduled fundraisers before then in Denver, Virginia, Miami and Los Angeles — at the home of actor George Clooney.
She needs to continue raising primary dollars because June contests in California and New Jersey will be expensive. Sanders faces fewer financial anxieties.
Sanders adviser Tad Devine said the senator was not encouraging his supporters to disrupt Clinton's events and was focused on his own message. But he also said the campaign would respond when Clinton mischaracterizes Sanders' records and positions.
Her attacks, he said, only help Sanders.
"When your attacks against your opponent feed the biggest weakness that you have, you are undermining yourself," said Devine.
Associated Press 2016