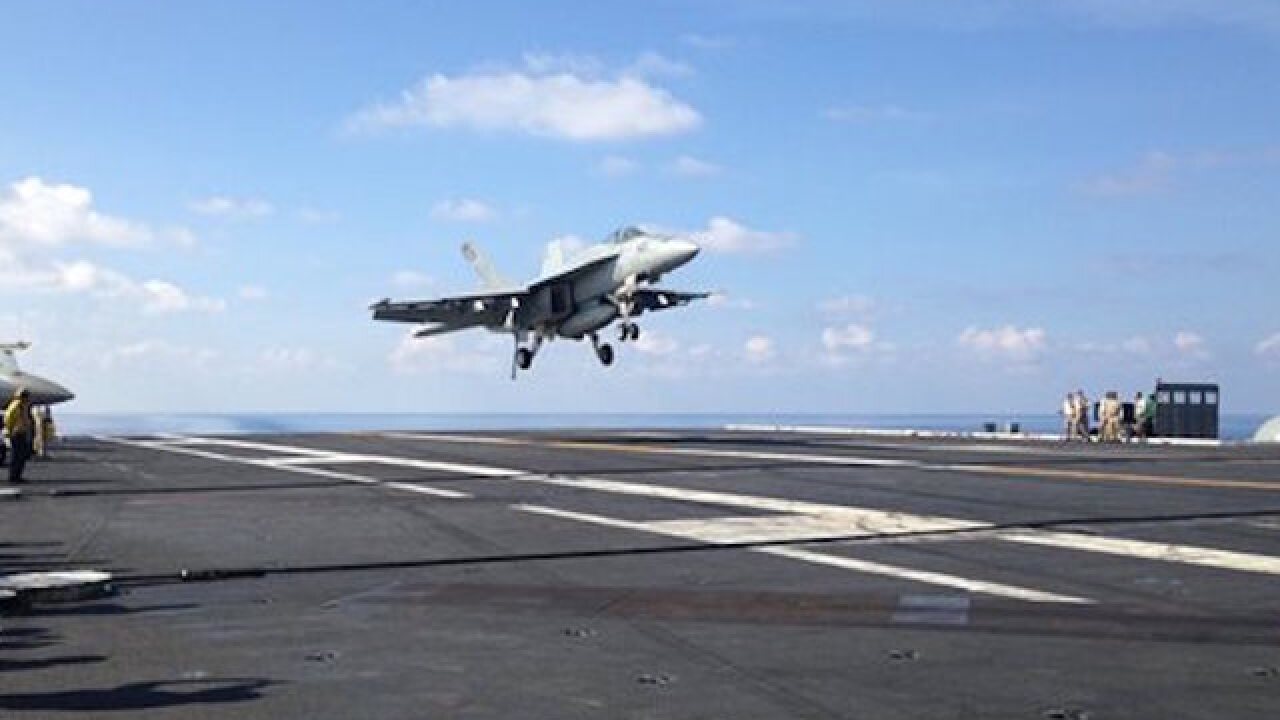 ABOARD THE USS JOHN C. STENNIS (AP) — For the second time in five months, Defense Secretary Ash Carter landed aboard a U.S. aircraft carrier in the bitterly contested South China Sea, sending a deliberate message to China on American power in the region.

With a key Asia Pacific ally at his side, Carter's visit aboard the USS John C. Stennis underscores persistent complaints from the U.S. and its allies in the region about China's military build-up in the South China Sea. Beijing has been creating man-made islands, and equipping many with runways, fighter aircraft and other weapons.

Carter stood alongside Philippine Defense Secretary Voltaire Gazmin as they watched U.S. Navy fighter jets launch into the vivid blue skies, about 70 nautical miles west of the island of Luzon.

Later in the massive gray ship's hangar bay, Carter said his message in making the trip is that the United States "intends to continue to play a role in keeping peace and stability in this region."

He said the only reason America's presence in the region comes up as an issue is because of China's behavior over the last year— and "that's a question of Chinese behavior."

"What's new is not an American carrier in this region. What's new is the context of tension which exists, which we want to reduce," he said.

Rear Adm. Ronald Boxall, the commander of Carrier Strike Group 3, told reporters that the Stennis and the ships in the carrier's strike group "regularly have a (Chinese) ship or two operating with us or near us."

Under a blazing sun, as the heat index pushed past 100 degress, Carter landed on the Stennis in a Marine V-22 Osprey helicopter. He spent about two hours on the ship, watching a number of fighters shoot into the sky off the flight deck, do circles around the Stennis and then land again, roaring to a stop as their tailhook caught the arresting wire.

He later spoke to several hundred sailors in the hangar bay, including one who asked why the U.S. allows China to participate in the large annual military exercise in the Asia Pacific. Carter said the U.S. wants to work together with China, and added that Beijing should not isolate itself.

The U.S. insists that the increasing American presence in the South China Sea and the broader Asia Pacific is meant to show support for allies and is not aimed at any one nation.

But the U.S. military presence also reinforces Carter's assertion that America will continue to fly and sail throughout the region, despite China's claims of sovereignty over the vast South China Sea.

And on Friday, Foreign Ministry spokesman Lu Kang said that, "Before the U.S. returned to the Asia Pacific region, relevant countries had sought to control the disputes and handle the conflicts through friendly negotiations, despite the disputes having existed for over four decades."

He told reporters during a press conference that if the U.S. wants a peaceful solution to disputes, "I hope it can practice what it has preached, and that their actions can really help to peacefully solve the disputes."

The Philippines is one of several countries that have overlapping land claims with China. The U.S. has said it does not take a position on the claims, but wants them settled legally.

But Carter's visit to the Philippines this week, and Gazmin's presence on the carrier sent a more pointed message of solidarity.

The visit to the Stennis comes a day after Carter announced new military aid to Philippines that spurred protests from China.

This will be the second time that Carter has flown onto a carrier while it is embarked in the South China Sea. Last November, he was on the USS Theodore Roosevelt as it sailed northwest of Borneo.

That visit came just as week after a U.S. Navy destroyer, the USS Lassen, challenged China's claim to a 12-mile territorial limit around Subi Reef in the Spratly Islands, about 150 miles to 200 miles from where the Theodore Roosevelt was sailing Thursday.

Earlier in the day on Friday, Carter spoke at the closing ceremony for a joint U.S.-Philippines combat exercise called Balikatan or shoulder-to-shoulder.

He said the U.S. "will continue to stand up for our safety and freedoms" and those of America's friends and allies. And he said the U.S. is committed to insuring that the Asia Pacific remains a region where every can rise and prosper.