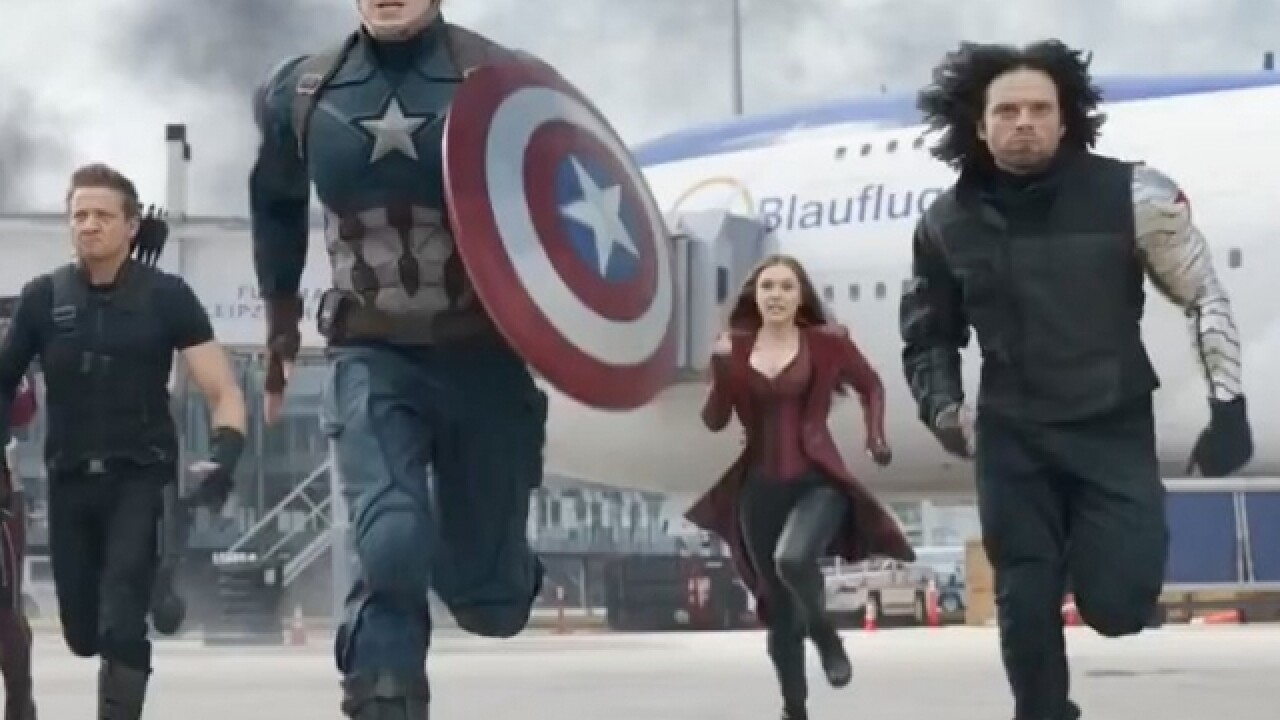 LOS ANGELES (AP) — It's "Captain America's" weekend at the box office once again by a large margin, but even with $72.6 million in earnings, the superhero pic left some room for other newcomers like "Money Monster," ''The Darkness" and "The Lobster" to play, according to comScore estimates Sunday.

"Captain America: Civil War" dropped 59 percent in its second weekend in theaters, in line with the second weekend showings of "Avengers: Age of Ultron" and "Iron Man 3." While it's on the higher end of second weekend falls in the Marvel Cinematic Universe, the Disney and Marvel film is still performing phenomenally well. In just two weeks, it has earned $295.9 million in North America, passing the total domestic grosses of "Captain America: Winter Soldier" film by over $35 million.

Disney's "The Jungle Book" remained in second place with $17.8 million, bringing its domestic total to $311.8 million after five weekends in theaters.

Meanwhile, the R-rated George Clooney and Julia Roberts financial thriller "Money Monster" got off to a healthy third-place start with $15 million, beating expectations in its first weekend in theaters after premiering at the Cannes Film Festival. The film cost only $27 million to produce.

"We felt like in the wake of 'Captain America,' we could open to $10 million. To open to $15 million in that time frame is really a great number for us and it bodes well for the playability of the movie," Rory Bruer, Sony's president of worldwide distribution, said. "We're very proud to be part of this genre. The adult thriller is not an easy code to crack."

The Blumhouse release label BH Tilt also opened the micro budget horror film "The Darkness" for the Friday the 13th weekend. The film, which stars Kevin Bacon, brought in $5.2 million from only 1,755 screens to take fourth place.

In limited release, distributor A24 also scored big with "The Lobster," a dark comedy about relationships starring Colin Farrell from director Yorgos Lanthimos. The film scored the best specialty opening of the year with $188,195 from just four screens in New York and Los Angeles before its expands nationwide over the next two weekends.

It's a good strategy to launch movies that don't have massive budgets on the weekend after the summer movie season kick-off, ComScore Senior Media Analyst Paul Dergarabedian said.

"Traditionally this second weekend in May is not an enviable weekend to be releasing on, but it can be a land of opportunity for films that fill a particular niche, or bring in an audience who might not be interested in these big blockbusters," Dergarabedian said. "It's not competing with all the noise."

The summer movie slate only gets more crowded from here on out. Next weekend sees the opening of "The Angry Birds Movie," ''The Nice Guys," and "Neighbors 2: Sorority Rising," before the big Memorial Day release of "Alice Through the Looking Glass" and "X-Men: Apocalypse."

"It was a big weekend, but not the most exciting weekend," Dergarabedian said. "It's mostly business as usual."

Estimated ticket sales for Friday through Sunday at international theaters (excluding the U.S. and Canada), according to comScore: