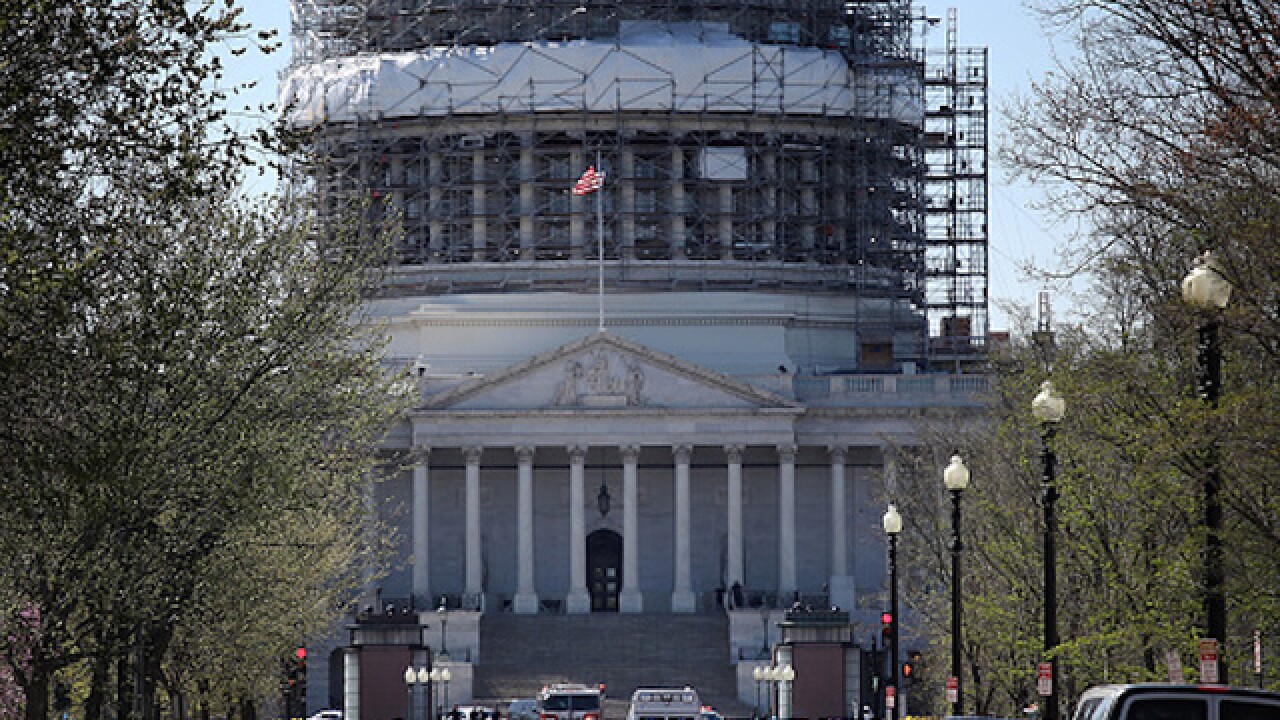 Copyright Getty Images
Win McNamee
<p>WASHINGTON, DC - MARCH 28: Emergency personnel and law enforcement officers gather outside the U.S. Capitol after at least one person was shot in the Capitol Visitor Center March 28, 2016 in Washington, DC. The Capitol was placed in "lock down" following the shooting. (Photo by Win McNamee/Getty Images)</p>

WASHINGTON (AP) — The U.S. Capitol complex reopened amid visibly higher security on Tuesday, a day after police say officers shot and wounded a man who pulled a weapon at a security checkpoint as he entered the underground Capitol Visitor Center.

Capitol Police identified the man as 66-year-old Larry R. Dawson of Tennessee. He was charged with assault with a deadly weapon and assault on a police officer while armed. Dawson was taken to a local hospital and underwent surgery. Late Monday, police said he was in stable but critical condition.

Dawson disrupted a House session last October by yelling he was a "Prophet of God." He was issued a "stay away order" by the District of Columbia Superior Court that same month that required him to avoid the Capitol grounds, court documents show.

Monday's incident, in which a bystander was slightly wounded, occurred at the tourists' entry point to a building that had heightened security even before the terrorist attacks of Sept. 11, 2001, and has had periodic scares ever since.

"We do believe this is an act of a single person who has frequented the Capitol grounds before and there is no reason to believe that this is anything more than a criminal act," Verderosa, who became chief this month after about three decades on the force, told reporters.

There appeared to be more police officers than usual at some posts outside the buildings as the Capitol and its surrounding buildings resumed business Tuesday.

Even so, the reopening was marred as police investigated a pair of suspicious packages at the Capitol's East Front and Library of Congress Jefferson Building. By mid-morning, both packages had been declared harmless and road closures just outside those buildings were lifted.

Verderosa said he did not know how many officers had fired at the suspect in Monday's incident. He said no officers were injured.

Verderosa said a weapon had been recovered at the scene and the suspect's vehicle had been found on the Capitol grounds and would be seized.

He also said a female bystander suffered minor injuries. Later Monday, spokeswoman Susan Griffiths of George Washington University Hospital said that hospital was about to release a patient it had treated for minor injuries and whom it did not identify.

Bill Miller, a spokesman for the U.S. Attorney's Office for the District of Columbia, said that after Dawson's October arrest, he did not appear in court as scheduled the following month. Miller said a bench warrant was issued for his arrest and in January. Dawson wrote the court a letter in which he claimed to be exempt from laws because he is a prophet of God.

"No longer will I let myself be governed by flesh and blood, but only by the Divine Love of God," he wrote, adding four exclamation points.

Other court paperwork said Dawson said he was previously in the Army and was honorably discharged in 1971.

An attorney listed as representing him in the case from October, John Copacino, did not immediately return a telephone message and an e-mail requesting comment Monday afternoon.

Records show Dawson was previously licensed in Tennessee to work as a funeral director. After his license expired in 2004, the state's Board of Funeral Directors and Embalmers voted three times to deny requests from Dawson to reinstate his license, citing the "applicant's lack of good moral character."

Kevin Walters, a spokesman for the state funeral board, said the denial resulted from an incident that occurred while Dawson was working as a school bus driver in a Nashville suburb. Dawson had written a letter to a young girl saying that God had told him to have sex with her, Walters said.

In 1998, before the Visitor Center was built, two Capitol police officers were fatally shot by a gunman who stormed a security checkpoint inside the Capitol itself. That shooter, Russell Eugene Weston Jr., was wounded and is custody at a federal mental facility.

Monday's incident, which Verderosa said began at 2:39 p.m. EDT, unfolded with Congress on recess and the capital swarming with springtime tourists, and with nearly all lawmakers away on recess.

The Capitol was on lockdown for about an hour Monday and the White House also was briefly locked down.