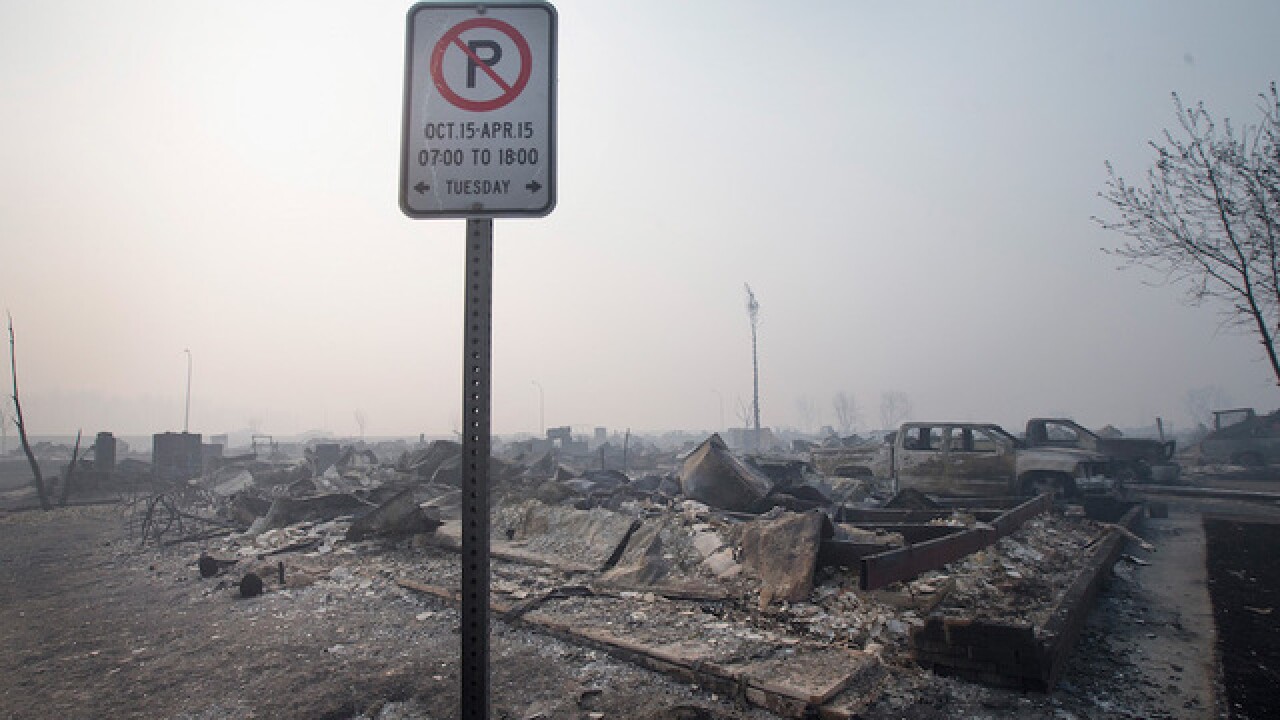 Copyright Getty Images
Scott Olson
<p>FORT MCMURRAY, AB - MAY 06: Home foundations and shells of vehicles are nearly all that remain in a residential neighborhood destroyed by a wildfire on May 6, 2016 in Fort McMurray, Alberta, Canada Wildfires, which are still burning out of control, have forced the evacuation of more than 80,000 residents from the town. (Photo by Scott Olson/Getty Images)</p> 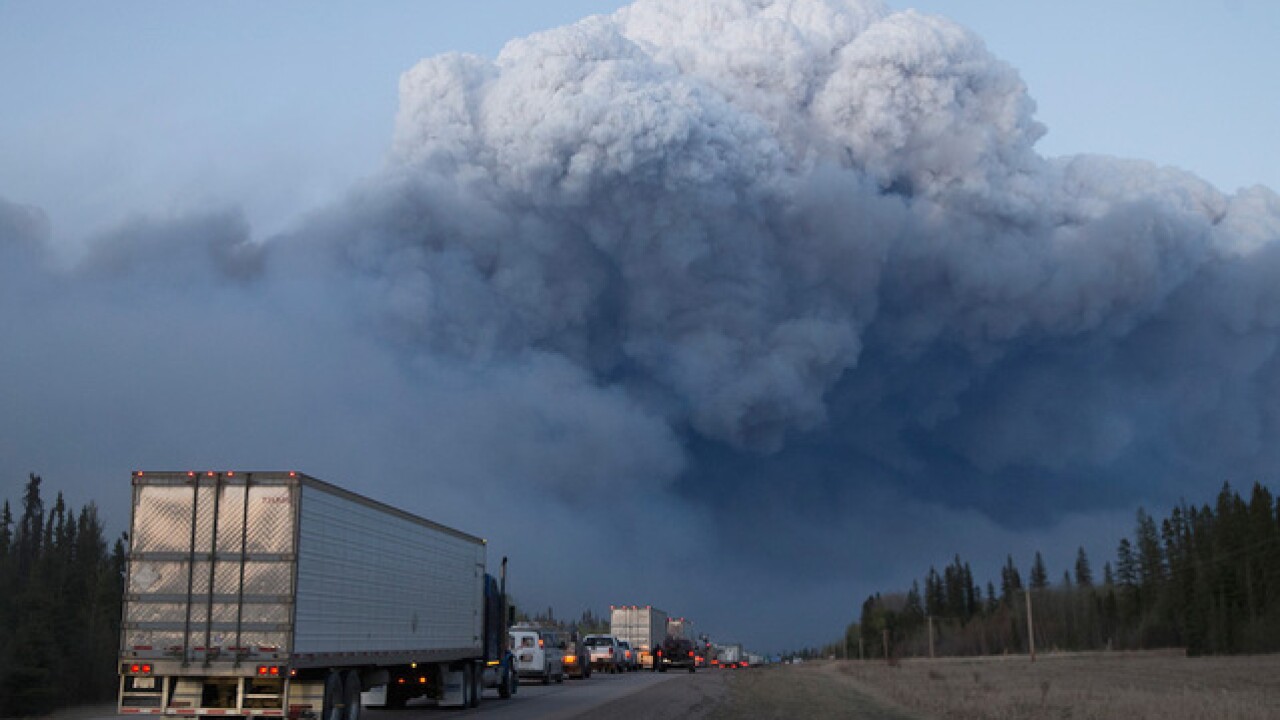 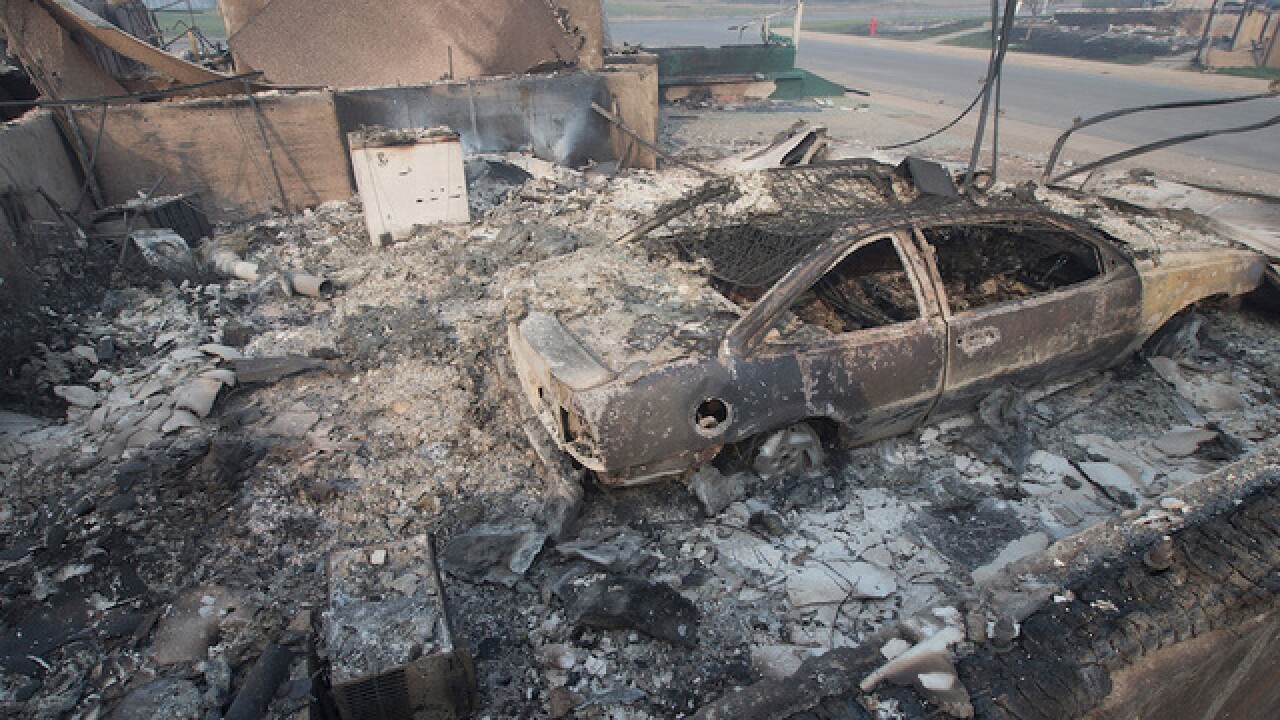 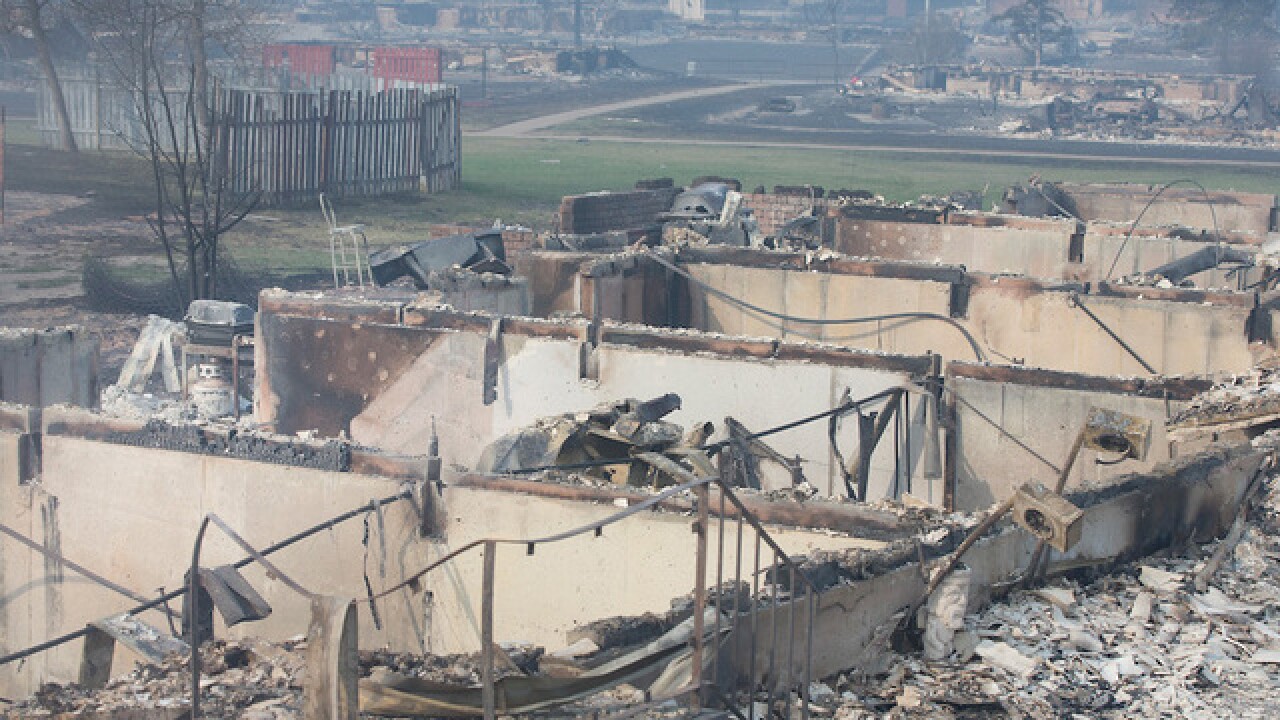 A massive convoy was under way Friday to move evacuees stranded at oil field camps north of fire-ravaged Fort McMurray, Alberta, through the community to safe areas south of the Canadian oil sands capital

Police and military were overseeing the procession of an estimated 1,500 vehicles.

Meanwhile, a mass airlift of evacuees was expected to resume, a day after 8,000 people were flown out.

In all, more than 80,000 people have left Fort McMurray, in the heart of Canada' oil sands, and officials say no deaths or injuries related to the fire have been reported.

The Alberta provincial government, which declared a state of emergency, said more than 1,100 firefighters, 145 helicopters, 138 pieces of heavy equipment and 22 air tankers were fighting the fire, but Chad Morrison, Alberta's manager of wildfire prevention, said rain is needed.

"We have not seen rain in this area for the last two months of significance," Morrison said. "This fire will continue to burn for a very long time until we see some significant rain."

Environment Canada forecast a 40 percent chance of showers in the area on Saturday.

About 25,000 evacuees moved north in the hours after Tuesday's mandatory evacuation, where oil sands work camps that usually house employees were used to house evacuees. But the bulk of the more than 80,000 evacuees fled south to Edmonton and elsewhere, and officials are moving everyone south where it is safer and they can get better support services.

The Alberta government is providing cash to 80,000 evacuees from the Fort McMurray fire to help them with their immediate needs. Premier Rachel Notley said her cabinet has approved a payment of $1,250 Canadian (US$967) per adult and $500 Canadian (US$387) per dependent at a cost to the province of $100 million Canadian (US$77 million). She told a briefing in Edmonton that she wants people who were forced from their homes to know that the government "has their back."

Some 7,000 evacuees had been flown to Edmonton and Calgary by Thursday night. It appeared the highway was safe enough on Friday to move thousands more south on the highway. It was not safe Thursday.

Officials said a military helicopter would lead the evacuation convoy on Friday morning to make sure the highway is safe. The convoy will pass through Fort McMurray where the fire has torched 1,600 homes and other buildings.

"That's why we had the helicopters ... just to make sure the motorists and responders are safe in case there's a sudden change in fire direction," said Sgt. John Spaans, a Royal Canadian Mounted Police spokesman. "They would be able to notify everyone immediately."

Police are escorting 50 vehicles at a time, south through the city itself on Highway 63 at a distance of about 20 kilometers (12.4 miles) south and then releasing the convoy. At that point another convoy of 50 cars will begin.

All intersections along the convoy route have been blocked off and evacuees are not being allowed back to check on their homes in Fort McMurray.

Spaans said the goal was to get all vehicles out of the area Friday, if the weather, fire and road conditions cooperate, but municipal officials later said in a release it would take about four days.

Fort McMurray is surrounded by wilderness, and there are essentially only two ways out via road.

Resident Crystal Mercredi packed her two kids and got out of town Tuesday, and even though her husband was just 20 minutes behind packing a trailer, he didn't get out until hours later because it was bumper to bumper traffic as the fire descended upon the city.

"I was worried that we were going to lose him," she said in a telephone interview. "He knew that I was upset so he jumped the curb on the wrong side of the road and got out."

Mercredi evacuated north but later overnight evacuated south and headed to Lac La Biche, Alberta, about 175 south where her family has a lake house that housed 50 people the first night of the mandatory evacuation. Lac La Biche, normally a sleepy town of 2,500, is helping about 12,000 evacuees where they are being provided a place to sleep, food, donate clothes and even shelter for their pets. She said she was lucky that a Shell employee filled their tank with gas after they initially evacuated north. That allowed them to escape south to Lac La Biche. She believes her Fort McMuray home is still intact but said her best friend lost hers based on video they saw. She said she and her family have had trouble sleeping and have had nightmares involving fires.

Unseasonably hot temperatures combined with dry conditions have transformed the boreal forest in much of Alberta into a tinder box. Morrison said the cause of the fire hasn't been determined, but he said it started in a remote forested area and could have been ignited by lightning.

"They are dealing with a beast of a fire, one of the worst we've ever seen," Federal Public Safety Minister Ralph Goodale said. "There is a forecast of improved weather conditions with perhaps the possibility of some precipitation. But the humidity remains very low and the forest is very dry, high winds continue to cause dangerous circumstances."

Goodale said firefighters and water bombers from other Canadian provinces are arriving and if more is required they'll ask the United States.

Prime Minister Justin Trudeau said the federal government has met all of the Alberta government's requests for assistance, including providing air assets and 7,000 cots for evacuees in emergency shelters, with 13,000 more on the way.

The region has the third-largest reserves of oil in the world behind Saudi Arabia and Venezuela.