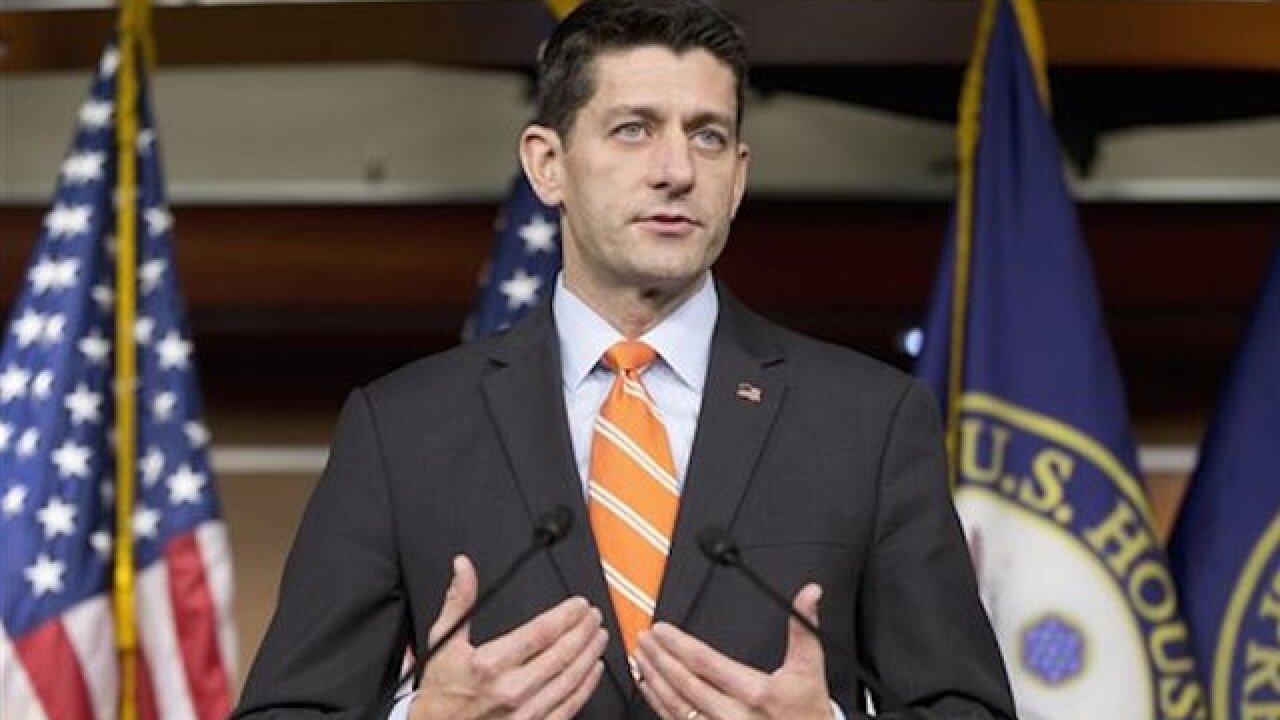 Pablo Martinez Monsivais
<p>FILE - In this Nov. 6, 2015, photo, House Speaker Paul Ryan of Wis., gestures during his news conference on Capitol Hill in Washington. Policy battles must be hashed out by Dec. 11 as Congress races to close out a $1.1 trillion spending bill and avoid a holiday season government shutdown. President Barack Obama and his Democratic allies promise to fight off what they consider the most glaring examples of GOP overreach. Republicans insist they won't walk away empty-handed. (AP Photo/Pablo Martinez Monsivais)</p>

WASHINGTON (AP) — Talks on a massive, government-wide spending bill have hit a snag as Republicans press demands for policy provisions on the environment, regulation of the financial services industry and making it more difficult for Syrian and Iraqi refugees to enter the U.S.

An initial end-stage offer from top Republicans was flatly rejected by Democrats whose votes will be needed to carry the $1.1 trillion measure through the House.

Lawmakers hope to pass the measure in little more than a week to avert a government shutdown, though it's becoming more and more apparent that a short-term funding bill will be needed to keep the government open past a Dec. 11 deadline.

Many lower-tier items in the massive measure have been worked out, leaving numerous policy provisions, known as "riders" as the main unresolved items.

"They sent us an offer that was anti-worker, anti-labor, anti-education, anti-environment ... anti-refugee," said top House Appropriations Committee Democrat Nita Lowey of New York. Many provisions in the 12 spending bills drafted by House and Senate Republicans have been slapped with White House veto threats.

Neither Democrats nor Republicans would release the proposal, but a memorandum from House Democratic staff characterized it in broad strokes, citing "poison pill" riders on the environment, labor regulations, financial regulation and refugees — but not efforts to unravel President Barack Obama's signature health care law, which is being targeted in legislation currently being debated by the Senate.

Lawmakers hope to pass the measure in little more than a week to avert a government shutdown, though it's becoming more and more apparent that a short-term funding bill will be needed to keep the government open past a Dec. 11 deadline.

The ill-will followed a story in Politico that quoted anonymous Republicans characterizing Minority Leader Nancy Pelosi, D-Calif., as an obstacle to the talks and blaming her for slow progress on dozens of unresolved issues.

"We haven't been talking to the press, we've been respectful, we've been open, understanding that we have to compromise and the rest — and then all of a sudden, they announce, 'We're telling the Democrats time is running out,'" Pelosi told her colleagues Wednesday morning. "Everything that we thought would have movement or that was still an open question, they just negated."

Despite Wednesday's blow-up, both sides remain committed to working out an agreement. The measure follows an October pact that awarded both the Pentagon and domestic Cabinet agencies about $33 billion above tight budget "caps" that many Republicans and virtually every Democrat opposed.