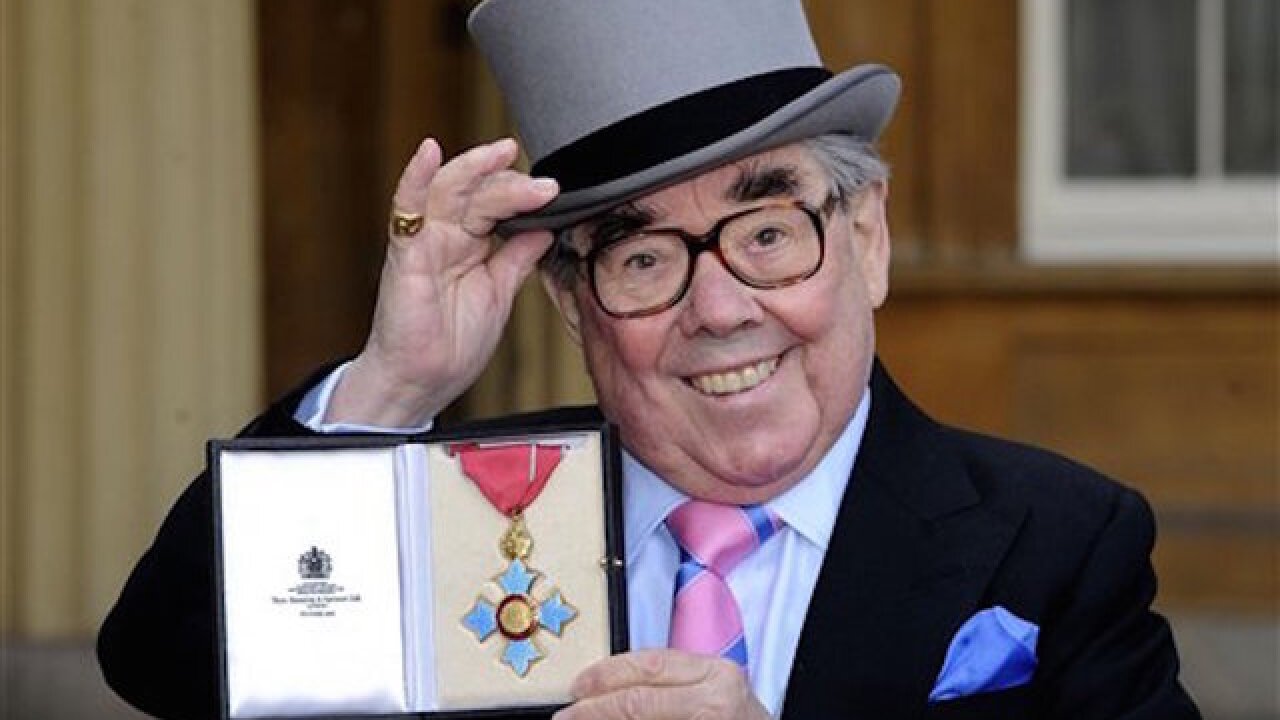 Rebecca Naden
<p>FILE - This is a Feb. 16, 2012 file photo of of British comedian Ronnie Corbett after he received his Commander of the British Empire (CBE), at Buckingham Palace in London. (Rebecca Naden/PA via AP) UNITED KINGDOM OUT NO SALES NO ARCHIVE</p>

LONDON (AP) — A diminutive, verbally dexterous entertainer with exquisite comic timing, Ronnie Corbett has been hailed as a giant of comedy by fans and fellow stars mourning his death at the age of 85.

Publicist Paul Sullivan said Corbett, half of much-loved duo The Two Ronnies, died Thursday "surrounded by his loving family." The cause of death wasn't disclosed.

Thanks to reruns, the television comedy show starring Corbett and the late Ronnie Barker has been a staple on British TV for more than 40 years. Generations of fans can recite swaths of Two Ronnies sketches and quote the pair's signature sign-off: "Now it's goodnight from me." ''And it's goodnight from him."

"He could do the serious stuff as well, but there was a lovely sort of mischief, his eyes twinkled," Palin told the BBC. "He was absolutely delightful to play with and against, and do material with and, also, just a good friend too."

Fellow Python John Cleese, who worked with Corbett in the 1960s, tweeted that Corbett had "the best timing I've ever watched. He was a great, kind mentor and a wonderfully witty companion."

Born in Edinburgh on Dec. 4, 1930, Corbett did military service in the Royal Air Force — he claimed to have been the shortest officer in the British armed forces — before entering the entertainment business.

In 1971 Corbett teamed up with Barker for a sketch show, "The Two Ronnies." It ran for a dozen series over 16 years and at its peak had 17 million viewers.

The pair's verbal dexterity, comic timing and physical incongruence — the bulky Barker towered over the diminutive Corbett — made them favorites with millions of comedy fans. The duo incorporated sketches, spoof newscasts and musical parodies, all of which delighted in wordplay. One memorable sketch involved Barker attempting by buy fork handles, and getting four candles from uncomprehending shopkeeper Corbett.

In 2005 he reunited with Barker, who died later that year, for a TV series, "The Two Ronnies Sketchbook." Corbett also worked with — and influenced — younger comedians including Rob Brydon, Peter Kay and Ricky Gervais. He played a parodic, drug-snorting version of himself on Gervais' showbiz sitcom, "Extras."

In real life, Corbett was a courteous man with a passion for golf. He once said that "I have not survived in show business for 50 years by being Mr. Nice" — but many fans and acquaintances disagreed.

Actor Russell Crowe tweeted: "And it's good night from Ronnie Corbett. Thanks for all the laughs mate," and Prime Minister David Cameron said Corbett would "be remembered as one of the all-time great comedians."

Corbett is survived by his wife Anne Hart and their two daughters.