Briles officially out at Baylor after sexual assault scandal 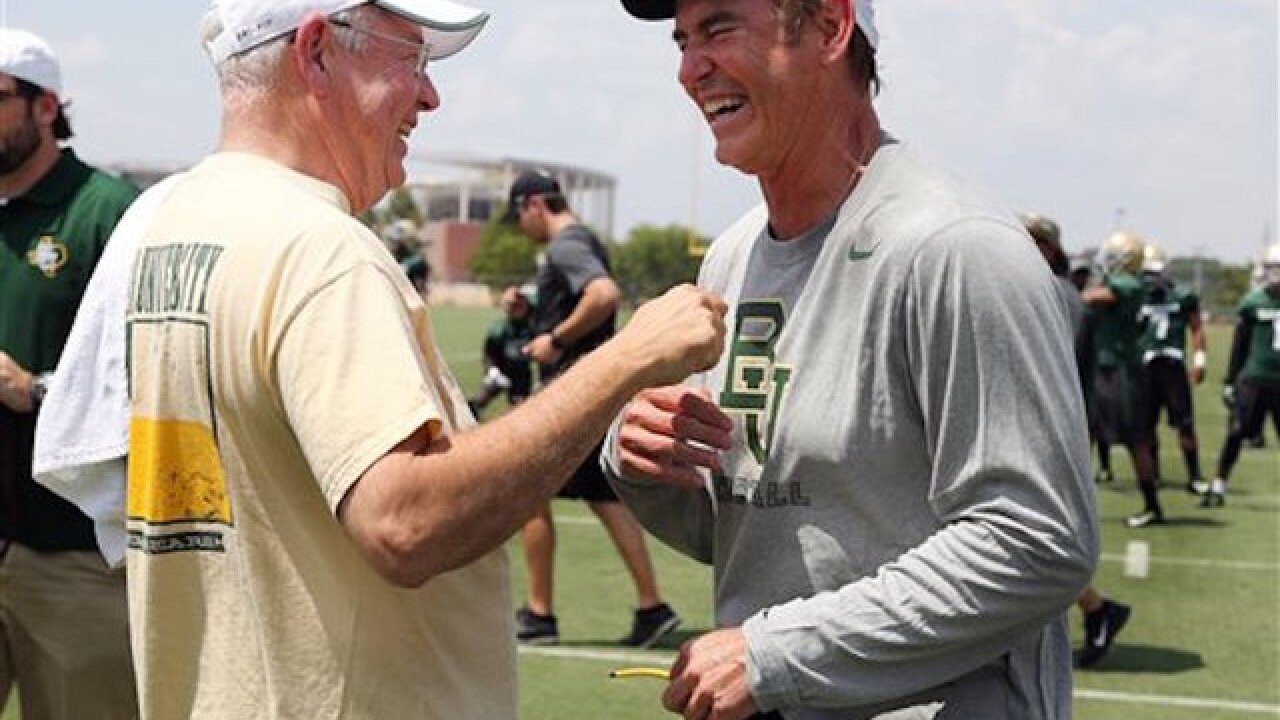 Copyright Associated Press
Rod Aydelotte
<p>FILE - In this Aug. 5, 2014, file photo,Baylor University President Ken Starr, left, jokes with head football coach Art Briles, right, on the first day of NCAA college football practice in Waco, Texas. Baylor University's board of regents says it will fire Briles and re-assign Starr in response to questions about its handling of sexual assault complaints against players. The university said in a statement Thursday, May 26, 2016, that it had suspended Briles &quot;with intent to terminate.&quot; </p>

WACO, Texas (AP) — Baylor and Art Briles have mutually agreed to part ways, almost a month after the release of a scathing report over the university's handling of sexual assault complaints against football players and the coach being suspended by school regents "with intent to terminate."

A statement released by the university Friday night said Baylor and Briles "agreed to terminate their employment relationship." The move was effective immediately.

"Both parties acknowledge that there were serious shortcomings in the response to reports of sexual violence by some student-athletes, including deficiencies in University processes and the delegation of disciplinary responsibilities with the football program," said part of what was called a joint statement from Baylor and Briles.

That came a week after Briles had withdrawn a demand for new lawyers in a federal civil rights lawsuit against him and the university amid reports he had settled a contract dispute with the school.

Briles' lawyers had told a federal court June 16 that he wanted attorneys separate from Baylor and had no intention of settling the lawsuit filed by a woman who was raped by a Baylor football player. The filing suggested a bitter court fight was brewing between Baylor and the coach who claimed his May 26 firing was wrongful termination.

Baylor, a private school, didn't provide any financial details for the settling of Briles' contract which was for eight more seasons.

"Baylor wishes Coach Briles well in his future endeavors," the statement Friday read. "Coach Briles expresses his thanks to the city of Waco and wishes the Baylor Bears success in the future."

Jim Grobe was hired May 30 as Baylor's acting coach for the 2016 season. But all of Briles' former assistants, including son Kendal and son-in-law Jeff Lebby, remain on staff. Kendal Briles is the Bears' offensive coordinator.

Baylor is facing at least three federal lawsuits brought by women who claim the school was indifferent to or ignored claims of sexual assault and didn't enforce federal gender discrimination protections under Title IX.

A 13-page finding of fact from the Pepper Hamilton law firm released by the university last month accused football coaches and staff of interfering with investigations into sexual assault complaints against players, and even impeding potential criminal proceedings. But the report did not identify Briles or any coach by name.